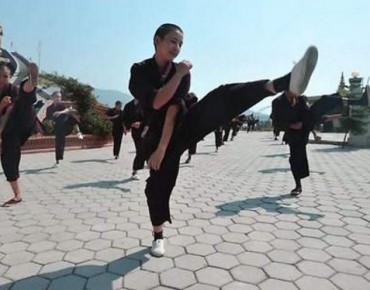 (Story: Matters India) More than 250 ‘Kung Fu nuns’, led by the Gyalwang Drukpa, spiritual head of the 1,000-year-old Drukpa Order based in the Himalayas, have commenced a cycle expedition that entered India to create awareness on women empowerment and environment consciousness, a statement said on Friday.

The expedition that started from Kathmandu in Nepal entered India from Gorakhpur in Uttar Pradesh on Thursday.

‘Kung Fu nuns’ are Buddhist nuns who grow up learning the martial art. They belong to Druk Amitabha Mountain nunnery based in the hills overlooking Kathmandu, reported Khaleej Times.

“The cycle yatra or expedition points to the independent and collective will power of women and their equivalence with men; the use of a vehicle that is environment friendly sends a strong message of conservation and environment friendliness,” a statement quoting Gyalwang Drukpa, the founder of ‘Live to Love’ global humanitarian initiative, said.

He said the relationship between Nepal and India was symbiotic.

“It’s an age-old historical, cultural and religious relationship and our monasteries in both countries operate seamlessly to provide spiritual guidance to our followers. It’s a natural route for us to travel from Nepal to India and vice versa.”

The cycle expedition will cover over 2,200 km from Kathmandu passing through the Indian states of Uttar Pradesh and Bihar via Gorakhpur, Gaya, Patna, Rajgir, Varanasi, Allahabad, Kanpur and Agra before culminating in Delhi on January 9, 2016.

The Drukpa Order that originates from the Himalayan region of Ladakh in Jammu Kashmir has built a strong history of community action and citizen empowerment for many years. Gyalwang Drukpa was honoured by the United Nations with the Millennium Development Goals Award in September 2010 for promoting environmental education and gender equality.