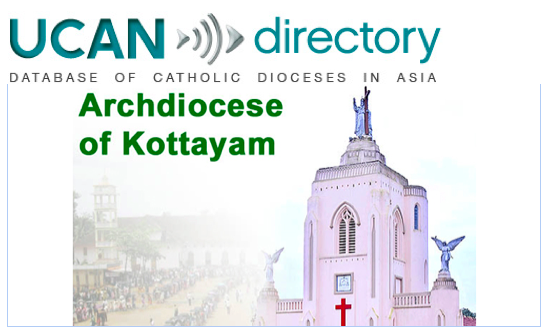 The Knanaya community traces its origin from Jewish-Christian emigrants from Southern Mesopotamia to the South Indian port of Cranganore in the year 345 who formed themselves into an endogamous community. The original community had only 72 families headed by Thomas of Kynai, a Persian merchant. A bishop, Uraha Mar Yousef, four priests and several deacons were among them.

Bishop Uraha had successors, sent by the Catholicos of the East, till the end of the 16 century. Under the East Syrian Bishops, the Knanaya Community had their own churches and priests distinct from those of the non-knanaya St. Thomas Christians. This system continued under the Latin Rite European bishops, who led the St. Thomas Chrisitians for long. When a ritual separation was effected among the Catholics in Kerala, as Orientals and Latins in 1887, all the Knanaya Catholics de facto were in the apostolic vicariate of Kottayam and Holy See ordered bishop Charles Lavigne to appoint separate Vicar General for the Knanaya Community.

When the Apostolic Vicariates were reorganized in 1896, the bishop appointed for the Changanassery Vicariate was Mar Mathew Makil, the former Vicar General for the Knanaya Community.

Even today, the Knanaya Community practices endogamy, restricting intermarriage with other communities including other Syro-Malabar dioceses. Kottayam is the central point of Syrian Christians in India.

The Archdiocese of Kottayam spans the entire state of Kerala. According to the diocesan data "Kottayam archdiocese extends over the whole territorium propium of the Syro Malabar Church."Kottayam district has the largest presence of Christian population. Since Christianity found a firm foothold here, Kottayam also saw its many offshoots. As a result Kottayam is now the headquarters of the Knanaya Church, Malankara Orthodox Church, the Syrian Church and the Jacobites.

Kottayam district came into being in 1949. The word Kottayam means 'Kottayakam', interior of fort. Kottayam is the largest natural rubber producer in the country. Kottayam is the nerve centre of Kerala's newspapers, with five major dailies being published from here. Kottayam is considered as the most prosperous town in Kerala.

The total population of the Kottayam district is 1,953,646 (as per the Census of 2001). Kottayam has been a multi-ethnic and multi religious town. Christians, Hindus and Muslims are the major communities here.

Malayalam and English are the languages used in the diocesan territory.

The territory is well connected with roads. The district has daily train services to all major cities of the country. The nearest airport is the Cochin International Airport which is nearly 65 kilometers from the diocesan headquarters.

The diocesan territory has equatorial climate, hot and humid. The most important rainy season is during the South West Monsoon which sets in the first week of June and extends up to September. The Northeast Monsoon extends from the second half of October through November. During December to March, practically no rain is received and from October onwards, the temperature gradually increases to reach the maximum in May, which is the hottest month of the year. The maximum temperature in the month of May comes to 34 degrees Celsius.

The economy of Kottayam Archdiocese is mainly based on agriculture. A major part of the population depends on agriculture for their livelihood. Rubber is the main cash crop. Coconuts, coca, pepper, vanilla and coffee are other major cultivations. The Christians in the diocese are financially well off. Major industries related to the processing of rubber latex and manufacturing of rubber products. Tourism has a major contribution to the district of Kottayam.

The level of telecommunications infrastructure is high. Almost everyone has a mobile phone. Most of the homes have television and telephone as wll as internet. In rural areas access to internet is limited.

Literacy rate in the diocesan territory is 95.90 percent, higher than the national average of 59.5 percent