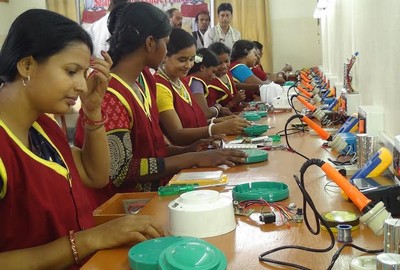 The center would promote environmental education that Pope Francis talks about in the later part of his encyclical.

A Jesuit social center in West Bengal state has launched facility to train women in making solar lanterns in an effort to put into practice the recommendations of Pope Francis in his encyclical Laudato Si.
The Loyola Solar Training Center at Pandua, some 65 kilometers away from Kolkata, was launched Aug. 14. It is in response to the papal call to harness natural energy, said Jesuit Fr Irudaya Jothi, director of Udayani (awakening) Social Action Center.
The center, he hoped would promote environmental education that Pope Francis talks about in the later part of his encyclical.
He said there are thousands of villages in India was still in dark as the nation celebrated 68 anniversary of independence. The women trainees would light up the nation with the solar lamps they would assemble, he said.
Eleven women have formed the first batch of trainees at the solar training center. The selected women are animators of self-help-groups (SHG), which were set up with the help of Seva Kendra, the archdiocesan social center in Kolkata.
Organizers said the training is exclusively for women because the program stress women's empowerment. Some 120 women from different villages of Howrah and Hooghly districts would be trained during the next one year.
In implementing the program Udayani partners with Calcuta Ondoan. Its president Izaskun Andonegi stressed the need for women's empowerment and said that no change was possible without women. The Spanish woman was present with her husband and two girls at launch of the program.
Father Franklin Menezes, Seva Kendra director, said the archdiocesan center had installed solar training centers in three deaneries of the archdiocese. The Jesuits starting the center comes in the fourth deanery, he said.