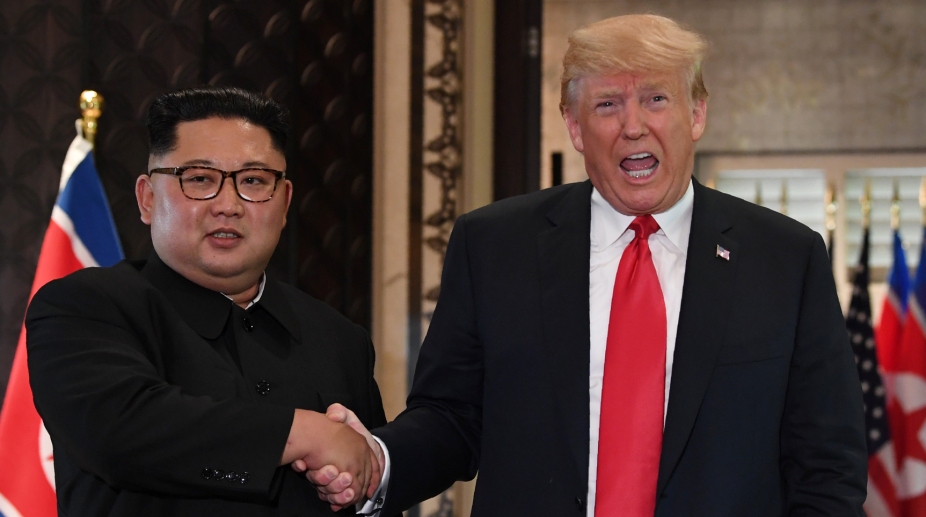 The agreement mentions that the US will provide “security guarantees” to North Korea and that Kim Jong-un has reaffirmed his “firm and unwavering commitment to complete denuclearisation”.

Note: Two unpredictable world leaders have met in Singapore and held a han

d shake to move forward peacefully in speech and actions. That is a good beginning in international politics, much better than exchanging abusive compliments. The agreement is for a complete nuclear disarmament of the Korean Peninsula.

Complete denuclearization in todays’ world  is a pipe dream. The big nuclear powers starting with US are not going to    give up their nuclear arsenal. In a world that claims to believe in democratic principles, one cannot  enforce different rules for different nations. Besides the only nation which misused nuclear bomb is US. So we cannot believe  what these superpowers  proclaim, more often to deceive others than to keep their word.

What they have put an end is the official Korean war or animosities  going on ever since 1953. The two leaders are different in ever so many respects. Kim is only 35 and Trump in his 70s. Both are fickle minded. Some agreement on paper for a peaceful coexistence is better than nothing. So we may hope they build on the small beginning  they have made. james kottoor, editor, ccv.

Please read below the report in the Statesman

North Korean supreme leader Kim Jong-un agreed to a complete denuclearisation during his historic meeting with US President Donald Trump on Tuesday.

Kim, the dictator of the northern part of the Korean peninsula, and Trump, a Republican leader whose political moves have been highly unpredictable to the frustration of many in his own administration, came together in Singapore for a meeting that many said they never expected to see in their lifetime.

The meeting ended with Kim and Trump signing an agreement that laid the foundation for a complete nuclear disarmament of the Korean Peninsula, which can be seen as the first step to a possible end of the Korean War which has officially not ended since 1953.

“We had a historic meeting. We will leave the past behind and the world will see a major change,” said Chairman Kim Jong-un, with Trump on his side after the signing of the agreement.

“I express my gratitude to President Trump for making this meeting happen,” said the 35-year-old Kim who took over the reins of his country in 2011 following the death of his father Kim Jong-il.

“We’re both going to do something, and we’ve developed a very special bond… We’re going to take care of a very big and dangerous problem for the rest of the world,” said Trump, for whom the agreement now becomes the greatest achievement of his career as the President of the United States of America.

“It worked out far better for both of us than anybody could have expected,” he added. When asked about denuclearisation, Trump said: “We are starting the process very quickly.” The agreement signed by the two countries specifically mentions North Korea’s (officially called Democratic People’s Republic of Korea) commitment to complete denuclearisation of the Korean Peninsula.

It acknowledged that US-DPRK summit, a first in the history of the two nations, “was an epochal event of great significance” which will open a new future and overcome decades of tensions and hostilities between the two countries. “President Donald Trump and Chairman Kim Jong-un conducted a comprehensive, in-depth and sincere exchange of a lasting and robuist peace regime on the Korean peninsula,” reads the agreement.

The agreement mentions that the US will provide “security guarantees” to North Korea and that Kim Jong-un has reaffirmed his “firm and unwavering commitment to complete denuclearisation”. The agreement states that the US and the DPRK have agreed to establish new US-DPRK relations “in accordance with the desire of the peoples of the two countries for peace and prosperity”.

The agreement also stressed that the two countries will “join efforts to build a lasting and stable peace regime on Korean Peninsula” hinting at Washington’s new approach towards the Kim family regime that has been in control of Pyongyang since before the 1950s Korean War.

The agreement also mentions the Panmunjom Declaration, signed between Kim and South Korean President Moon Jae-in on 27 April 2018, in which both the leaders agreed to complete denuclearisation of the Korean Peninsula and end the Korean War. Both US and North Korea have also agreed to recovering remains of prisoners of war and those considered missing in action (MIA), including the immediate repatriation of those already identified.

At the end of the summit, before walking their separate ways, Trump lauded Kim as “a very talented man who loves his country very much”.US Secretary of State Mike Pompeo will follow-on the progress of the commitments mentioned in the agreement with relevant high-level DPRK official.

The historic signing came after a one on one meeting between Kim and Trump which was followed by an expanded bilateral meeting with their aides and a working lunch. They even went for a stroll. Before the signing, Kim said the summit was a “great prelude to peace”. “Of course there will be difficulties along the way, but as of today, a day that a good start has been made, I am determined to start a grand undertaking together,” he added.

The summit, which was closely observed by the entire world, began in a carefully choreographed manner at 9 am (local time) when the two leaders shared a 12-second handshake against a backdrop of American and North Korean flags.

Notwithstanding the outcome of the agreement, observers were mostly unanimous in their acknowledgement of the summit being historic in every sense of the word. Washington and Pyongyang have treated each other as enemies, and anti-US propaganda is the norm in North Korea.

Previous US Presidents have made several attempts to get Pyongyang to give up its nuclear weapons, without success.Trump’s bombastic and belligerent statements such as the “size of the nuclear button” and “the nuclear arsenal at America’s disposal” had previously threatened to derail the efforts that led to the eventual summit. Kim, too, has been equally aggressive in his criticism of Trump and the US.

The two leaders, who reached Singapore on Sunday and held individual meetings with Prime Minister Lee Hsien Loong, are scheduled to depart today.