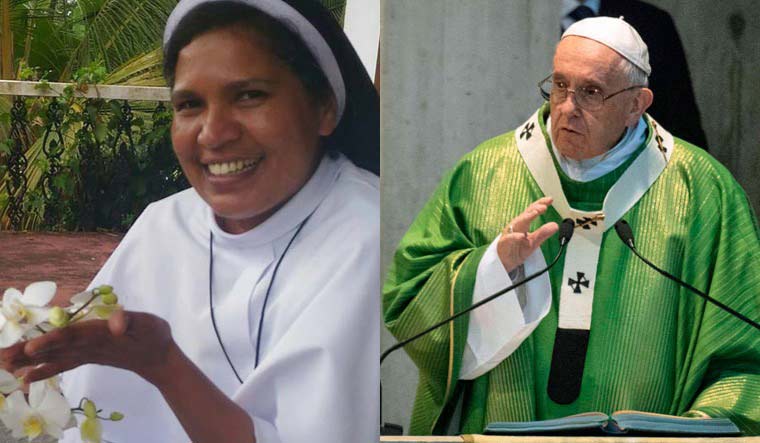 A collage of Sister Lucy (Via Facebook) and Pope Francis (AFP)

Vatican rejects Sister Lucy's third appeal against explusion from her congregation. Sister Lucy was expelled in August 2019 for "failing to give a satisfactory explanation for her lifestyle…", but she maintains it was because she protested against Mulakkal.

In August 2019 Sister Lucy Kalappura was expelled from Franciscan Clarist Congregation (FCC) for "failing to give a satisfactory explanation for her lifestyle in violation of FCC laws" – which involved participating in the protest against multiple rape-accused Bishop Franco Mulakkal (case ongoing in Kerala High Court), buying and driving a car, publishing a book and earning remuneration. She challenged her congregation's expulson order and wrote to Leonardo Cardinal Sandri—Prefect, Congregation for the Oriental Churches, Vatican.  She wrote "In my case too, what purports to be 'disciplinary action', and what in reality are reprisals, against me commenced only after I stood by the sisters of the Missionaries of Jesus in their efforts to secure justice for the outraged nun. This is amply evident from the show-cause notice issued to me, a copy of which is attached for ready reference," she said.

"I wish to urge strenuously that the actions initiated against me, and the vindictiveness it reeks of, cannot be understood aright, if they are seen in isolation from the Franco Mulakkal matter as the trigger. I fervently hope that the honourable members of the tribunal would appreciate the truth that I am a collateral victim of this Franco Mulakkal scandal, in regard to which the mettle of the Church's commitment to truth and justice is being tested in full public view," Sister Lucy wrote.

"It does not have to be argued that the Holy See being made to be seen as partisan in this case, or as hostile to justice being available to a rape victim, is sure to discredit the witness and integrity of the Catholic Church for the years to come. It is shortsighted to coerce nuns to perjure in legal proceedings in the hope that the ends of justice can be stalled thereby. It is bound to result in extreme and undying infamy to the Church," Sister Lucy said in the letter.

She expressed her desire to appear in person before a tribunal that would consider her appeal against the congregation's decision. She also sought an opportunity to present her case to Pope Francis. "It is requested, further, that I be granted an opportunity to present my case to the Pope Francis, whom I venerate and in whose sense of justice I have absolute faith," the nun said in her letter to Leonardo Cardinal Sandri.

Against the above backdrop, the Vatican has rejected Sr Lucy's third appeal and maintained the order of her expulsion from FCC.  It is however very surprising that the Vatican letter is in Latin (a language which is Greek to Sr Lucy) and is dated 27 May 2020, one year ago – something unthinkable in today's age of supersonic-speed communication.  It clearly exposes the Justice System of the Pope who on one hand exenorates Cardinal Marx who tenders his resignation for turning a blind eye to four decades of sexual abuse in the German Church, condones the multiple rape charges against Bishop Franco Mulakkal (against whom case is going on at a snail's pace in the Kerala High Court) and punishes the spirited Sr Lucy, the whistleblower.  To the Aam Aadmi it is Sister Lucy who is filled with the Holy Spirit to fight her case & the victim nun's case; and not the Pope who wavers in his justice system conveniently siding with the power lobby.  Is the Pope blindly going by the recommendation of Cardinal Oswald Gracias (Bombay) who exclusively advises him on matters relating to India and whose priority of all pressing matters (Education, Health and Youth), is LGBT issues?  Sr Lucy's verdict by the Vatican clearly shows the writing on the wall for the Catholic Church which is at a "Dead End" as Cardinal Marx, the Pope's blue-eyed man mentioned in his letter of resignation.

Meanwhile, Sister Lucy has said she will not leave her convent until the Kerala court decides her petition which is likely to come up for hearing in  June-July 2021. She also said she would continue her battle against the “corrupt practices” of the Church. May her tribe increase. Isaac Gomes, Associate Editor, Church Citizens' Voice.

Thiruvananthapuram:  Sister Lucy Kalappura – the nun who was expelled on "disciplinary grounds" after she joined protests against rape-accused Bishop Franco Mulakkal – has been ordered to vacate her convent.

A letter by the Superior General of the Franciscan Clarist Congregation in Kerala, which is part of the Catholic Church, claims the eviction notice comes after Sister Lucy's petitions against her dismissal were rejected by legal forums within the Catholic Church.

"There is no further legal remedy available to you to within the Catholic legal system to challenge your dismissal… your right to continue as a member of the FCC is now definitively and irrevocably extinguished," the letter reads.

"Now onwards it is unlawful for you to continue to stay in any of the Franciscan Clarist Convents."

Sister Lucy told the media that "justice is being denied because I spoke the truth".

"Not one person can be denied justice like this. Justice is being denied because I spoke the truth. These people who are denying justice are the ones who teach that truth must be said. The people are with me," she said.

"Is this what Christianity is about? The Superior General is rejoicing at Sister Lucy's dismissal. Better if such people are not nuns forget about being Superior Generals. Secondly, why has the Vatican letter not been written in language a person understands and that too reaching after a year from its issue?" AM Sodder, an advocate and a member of the Association of Concerned Catholics, said.

"(This is) a sad day for the Catholic Church in India," AM Sodder added.

Sister Lucy was expelled in August 2019 for "failing to give a satisfactory explanation for her lifestyle in violation of FCC laws" – which involved participating in the protest against Mulakkal, buying and driving a car, publishing a book and earning remuneration.

The FCC had said she had been issued "canonical warnings" but failed to show remorse.

Sister Lucy, however, has maintained that the disciplinary action against her was initiated only because she participated in the protest against Mulakkal. At the time of her expulsion she told NDTV: "I'm very afraid… they are killing me little by little, trying to take away all my happiness."

In March last year the Vatican, for the second time in less than five months, rejected her appeal. She made her first appeal in October 2019. When her second appeal was rejected she said: "I will not go anywhere and continue to live in the congregation… will now let the court decide."

Mulakkal, who has denied all charges against him and is currently out on bail, is being tried by a Kottayam court for the rape of a nun between 2014 and 2016. He has been charged with rape, wrongful confinement, unnatural offence and criminal intimidation.

Sister Lucy Kalappura, the Catholic nun who was expelled from the Franciscan Clarist Congregation (FCC) in 2019 and who had spoken up against rape-accused bishop Franco Mulakkal, said on Monday that a canon court in Vatican has turned down her third appeal against her expulsion.

Kalappura, 55, said she received a fresh communiqué from the Vatican on Saturday in this regard following which the Mother Superior of the FCC, Sister Ann Joseph, sent a fresh notice to her to vacate her room in the convent, which she has continued to occupy after a local court in Wayanad stayed her eviction from there in 2019. Even the Kerala high court granted her protection that year.

“The letter is in Latin, but the covering letter spells out the decision. Details will be available only after the letter is translated fully. But it is dated 2020,” Kalappura said in a telephone call from Manathawady in Wayanad.

But it isn’t just the date that’s old — even the signature on it is from last year and there are signs that the original stamps on it were removed, the nun said, adding that it has created doubt in her mind about its veracity. “It seems the letter was fabricated to smoke me out of the convent. I fear it is part of a conspiracy by FCC superiors,” Kalappura alleged.

Kalpetta: Sister Lucy Kalappura said that rumours on getting a letter from Vatican approving her expulsion from the church was baseless. She added that her lawyer has not informed of any development on the trial on the plea filed by her or any endorsement on it. If the trial is proceeding without her knowledge, it cannot be justified at any cost, she reacted.

The petition was filed in Vatican in March 2020. The court was closed in the backdrop of Covid and it reopened only in August. The letter which stated that the expulsion was accepted was dated May 27, 2020. It was received after one year. So, it is clear that the letter was prepared before the lawyer could file an appeal for trial, she added.

The congregation continues fake campaign using the letter which was sent before the trial started. FCC superior Anne and others are conspiring against me for the last one year. I was directed to vacate the room within one week or to face action. They have taken action against me in the most demeaning way, she stated.

It is clear that the stamps on the letter sent from Vatican was removed and new ones pasted. The letter sent one year ago is being circulated now, Sister Lucy said.