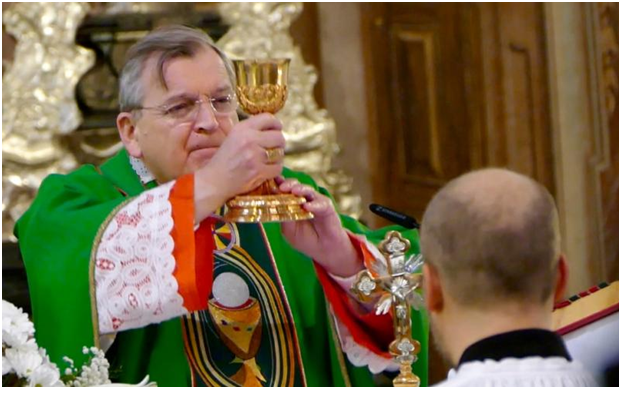 Note:  Faith and Reason are in mortal conflict, they have always been! The moot question here is: What are the limits of free thought and expression? The universally accepted principle is that of the French philosopher:

“I will go to death to defend your right to think and express what you hold to be true, even when  I may not agree  with one bit of what you say!”

What about Atheists? Didn’t Pope say that some Atheists are far better than hypocritical Catholics? Didn’t many Catholic theologians churn out – they still continue to do — theories about God,  heaven, hell, purgatory etc., ever so  many things  which no human can  understand or digest?

Didn’t Jesus’ contemporaries ask him:  “Who is your father”  implying he was a  bastard, and less offensive, call him a “wine beeber,  friend of  drunkards and prostitutes!” His answer  to the priestly  class of his time was: “Drunkards  and prostitutes  would  go to heaven before you!”  The only  mind you  can stop thinking  and the only mouth you  can  keep shut is your own! The  caravan cannot stop marching because the dogs are barking!

Recall the instance of Pilate asking Jesus, “What is truth?” and his eloquent silence, or of ‘Annadurai’ to “Who is your father?" while addressing a mammoth meeting, “I was born for money” instantly! I have gone to listen to his speech at Marina beech, Chennai!

Jesus  does not need any defenders. Those who need are those who claim  to be  teetotalers  and  all  sex traps and looters of church-money (widow’s mite/offering at mass)! One  smart  guy has  posted  something  through provoking and wrote  something  like  the  following:

“An  Iceberg  called  CLERGY SEX  has  hit  the Titanic  called  the CHURCH and it is sinking! (of course  the builders of Titanic knew well, even God couldn’t  sink it. So do all defenders of the Church today,  except this ‘know-nothing’.)  SoS  Calls are flying thick and fast. What’s the last resort, a crisis management action to take?

“Just  wake up the “Me too” sections of the Sisters to come out in the open to fight all sexy priests, in every step of the hierarchical ladder, up from the just ordained to CARDINALS! Throw this dead weight who have fattened themselves eating, drinking and sexing, without sweating to the depth of the sea! The TITANIC may float again!”

“Intelligenti pauca!” Few words are enough for the intelligent! Keep cool! Wasn’t Jesus sleeping soundly when the wind and waves were raging? Nothing to fear for those who are following Jesus through thick and thin! But ‘Cave cadas’  or don’t slip and fall!  james kottoor, editor ccv.

December 18, 2019 (La Nuova Bussola Quotidiana) — A Netflix streaming of a blasphemous film that portrays a gay Jesus and a poster which portrays Jesus in the act of pedophile impulses displayed at a museum in Rome are disgusting the Catholic world.

Cardinal Burke: "Art has become an expression of the meaningless of life without God; they hate Christ because he reveals this emptiness." "It's scandalous that bishops and priests remain silent when God is attacked, it is a sign of the grave crisis in the Church." "The faithful should make acts of reparation and make use of every lawful means to prevent these obscenities from proliferating."

"They call it art but it is an expression of the emptiness of life without God and rebellion against the law that God has placed in the heart of every person. And the silence of priests and bishops in the face of these disgusting attacks on the Lord is a sign that also the situation in the Church is very serious."

Cardinal Raymond L. Burke does not mince his words in judging the clamorous blasphemous works masked as artistic expression. In particular, just recently, two cases have conquered the news headlines: the obscene poster of a pedophile Jesus on display outside the Contemporary Art Museum of Rome (Macro) and the film about a gay Jesus ("The first temptation of Christ"), on the Netflix streaming platform which is provoking a very strong reaction from Christian communities around the world. And so as not to miss the icing on the cake, there is the case of the mega-poster affixed to a Vatican building in Via della Conciliazione in Rome, a stone's throw from San Pietro, advertising the film — also on Netflix — entitled "The Two Popes", a commercial operation of dubious content that has perplexed and scandalised many faithful passing by.

Cardinal Burke, there is a crescendo of blasphemous works with the presumption of being artistic. What is happening?

In the first place it is a phenomenon due in part to nihilism in the Arts, which are no longer an expression of truth, beauty and goodness, but have become an expression of the emptiness of a life without God; they are the expression of rebellion against the law that God has placed in our hearts. This is today's society; but there is also an aspect that concerns the Church: pantheism has entered, syncretism with non-Christian religions and even with secularism. The figure of Jesus has become relativized, He is no longer the only Saviour, but reduced to being a good man, a symbol, therefore with all the merits and defects of a man. For a Christian this is the most serious thing that could possibly happen, Christ converted into any symbol. Just read what was written in the preparatory documents of the Amazon Synod: Jesus is no longer the One who gives order to everything, but part of the cosmos … It's unbelievable.

It could be argued that if even His unique divinity is no longer recognised, it is not clear why there should be such rage against His person, why disfigure His face?

This is life without God; there is not indifference, but an evident and angry reaction to destroy the One who is a sign of contradiction, who reveals the emptiness that exists in life. They cannot tolerate His light.

With regard to light, a typical Christmas theme. It seems a strange coincidence that these blasphemous attacks take place just as the Church is preparing for Christmas.

One thing that can't fail to be noticed is the silence of the Church in the face of these blasphemous attacks. Politicians took action against the Macro manifesto, the laity protested against the Netflix film with a large collection of signatures but in both cases there has been no strong signal from the top, from the shepherds.

You are right, this silence of bishops and priests is a scandal. I have no doubt that there are also good priests who defend their flock, but unfortunately these are isolated cases. Also in the Church a politicised vision of life has taken precedence: it is divided into opposing camps, conservative or progressive, for or against the Pope. All this is absurd. The Church is guided by truth, not by political convenience. Instead, the tendency is to do what is politically correct, so it happens that even when the Lord is the target of a disgusting attack, there is silence. It is a clear indication that the situation in the Church is very serious.

But in the face of these attacks, what should a believer do? What should  the next step be after the obvious indignation and pain?

First of all, acts of reparation must be carried out. Prayer intentions offered to repair these terrible offences. Also penances must be served for this purpose. But then we must use all the God-given gifts we have to prevent these obscenities from spreading: writing and any other legitimate action to prevent the recurrence and spread of blasphemous acts. We should ask who the sponsors of certain exhibitions or events are, which theatres or halls host them; and take stock.