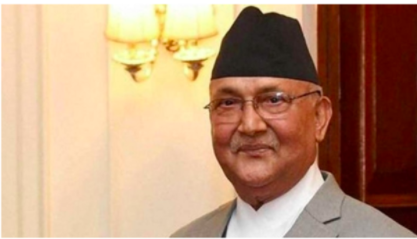 Nepal PM KP Oli questioned how Ayodhya came to Janakpur to marry Sita if it was in the place claimed by India. (Photo:N PTI)

Are we brgging about an Ayodhya in Nepal? If so where will the Ram temple be built? Who will build it: India, Nepal or both together? We are in the age of fake news, post news and alt news! And news is not news, if it is not new? So the only thing we are certain about now is, it is NEW, so news!

We cannot create or invent our neighbors. We have to live with them in peace and harmony with a lot of give and take, not fight with them. Redrawing boundaries is impossible! Expansionism was. Those days if colonialism has gone for good.

We live in Global Village!

With Marshal McLuhan and the advent of internet, we have stepped into the global village at a shouting distance, no matter in what part of the  world we live. In such a world what should guide us all is not independence but interdependence. We have to hang together or hang separately. We cannot survive without our neibhbor, whether it is Nepal, China or US.

The bigger the country, the greater its dependence on small countries, as it is emphatically demonstrated in a family, where happiness is possible only if the bigger ones take good care of the little ones to grow up to become a contributing member. Do we build walls between parents and children? It is done in some families!

We are living equally in the age if face book and social distancing, what is more important is Social outreach. That is why Fracis Pappa urges to live a “Face to face” life, not a face book one. We are social animals, not wild and brute animals preying on each other, though many are doing just that, some knowingly and some unknowingly!

You draw your own conclusions trying to become your neighbor’s keeper, not Keep! That is trying to be useful to them. Stop SHORT of USING YOUR NEIGHBOR! That is anathema! james kottoor, editor ccv.

India set up a 'fake Ayodhya'

Alleging that India encroached the cultural facts of Nepal, Oli said that India has created a 'fake Ayodhya'. He also said that Lord Ram was a Nepali and not from India.

Even as ties between India and Nepal continue to be strained, Nepali PM KP Oli has stirred a controversy by claiming that Lord Ram was Nepali.
"Lord Ram’s kingdom Ayodhya is located west of Birgunj in Nepal and India has created a disputed Ayodhya," said Nepal Prime Minister KP Oli on Monday.
Speaking on the occasion of Bhanu Jayanti at the Prime Minister’s residence, he said, “We are under the misconception that Sita married Ram of India. But Ram was not Indian but Nepali".
Alleging that India encroached the cultural facts of Nepal, Oli said that India has created a 'fake Ayodhya'. "Lord Ram's kingdom was not in Uttar Pradesh but in Nepal, near Balmiki Ashram", said Oli.
Oli, the PM of the Hindu-majority nation claimed that Ayodhya was located in the west of Janakpur at Balmiki Ashram in a place called Thori near Birgunj in Nepal.
He added that the Valmiki Ashram in Thori belonged to Panditji Ridi who performed the Putrishti Yajna for Dashratha, Lord Ram's father, to bless him with a son. "That place also belongs to Nepal," he said.

He added that a place called Balmiki Nagar is presently in West Champaran district of Bihar, some part of which is also in Nepal.
He questioned how Ayodhya came to Janakpur to marry Sita if it was in the place claimed by India.
"How did residents of the Ayodhya- which India claims is in Uttar Pradesh- come to Janakpur to marry Sita? At that time there were no phones so how did they communicate? During those times, marriages were arranged in nearby kingdoms only. No one used to travel so far to marry," said Oli.

The India-Nepal bilateral ties came under strain after Defence Minister Rajnath Singh inaugurated a 80-km-long strategically crucial road connecting the Lipulekh pass with Dharchula in Uttarakhand on May 8.

Nepal reacted sharply to the inauguration of the road claiming that it passed through Nepalese territory. India rejected the claim asserting that the road lies completely within its territory.

India termed as "untenable" the "artificial enlargement" of the territorial claims by Nepal. India has handed over a diplomatic note to Nepal over the map issue, Nepalese media reports said.

Nepal Prime Minister K P Sharma Oli, under pressure to resign amidst a rift in the ruling Nepal Communist Party over his style of functioning, has alleged that some of the ruling party leaders are aligning with the southern neighbour to remove him from power after his government issued a new political map incorporating three Indian territories.

His allegations have been criticized by senior NCP leaders, including former prime minister ‘Prachanda’, who demanded Prime Minister Oli’s resignation, saying his recent anti-India remarks were “neither politically correct nor diplomatically appropriate.”