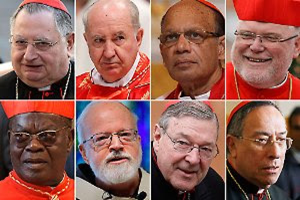 (The follow information was forwarded to us by our friend John Menezes, Mumbai. Simultaneously he has forwarded it also to CBCI, Nuncio, Bombay Archbishop etc. For Christians, especially, the St.Thomas variety, they have to touch and see to believe. So for more detailed information please go to Traditio website: http://www.traditio.com/com.htm. It describes itself as "The Independent Voice of Traditional Roman Catholicism since 1994" It is a Virtual Encyclopædia of Traditional Catholicism. The TRADITIO Network was designated as "the English-speaking world's strongest site for Tradition" by the French traditional Catholic organization. They describe themselves as: ”We are what you once were. We believe what you once believed. We worship as you once worshipped. If you were right then, we are right now. If we are wrong now, you were wrong then.” For last Christmas Pope Francis, who speaks without mincing words raised some 15 traits of his church which needed review or radical revision. So all are waiting with bated breath wondering what words of wisdom are going to come out from his mouth for this Christmas, since he is now caught in a whirlwind of controversy in mid-sea as the boat of Peter was caught once upon a time.
We too are living at a time when we have to put on a Reinosures skins to resist piercing criticisms that are intentionally provocative and bitingly satirical as in the present instance below. But without losing his calm Francis is sure to bring the roaring winds and dashing waves, he is caught in public more than ever before, to a stand still, we all may prayerfully hope to see. James kottoor, editor)

DECEMBER 21, 2015 – ST. THOMAS, APOSTLE
GREAT O ANTIPHON AT VESPERS: O ORIENS [O DAYSTAR] DOUBLE FEAST OF THE SECOND CLASS
Francis-Bergoglio Announces Next Stage of Protestantizing
Newchurch to Eliminate even the Notion of the New papacy
From: The TRADITIO Fathers

Executive Committee of Eight New cardinals plus One
To Whom Francis-Bergoglio Has Delegated the Running
Of His Uncatholic Newchurch of the New Order
Bergoglio Wants to Proceed with the "Decentralization" of New Church
And the Elimination of the New papacy
In Order that National New bishops Conferences May Have Authority
To Make up Newchurch Doctrine, Morals, and Worship
Just as the Arch-heretic of Protestantism, Martin Luther, Instituted
The Marxist new pope Francis-Bergoglio sees a New church in which all doctrine, morality, and worship is fluid. In some new dioceses, "gay marriage" will be permitted; in others, not. In some Newdioceses, divorce/remarriage will be permitted; in others, not. Some new dioceses will look the other way when their presbyters and new bishops rape, sodomize, and sexually assault children; other new dioceses will prosecute these crimes.

The first document of the Vatican II Anti-council, promulgated by the new pope Paul VI-Montini on December 4, 1963, is best known for destroying the validity and even the institutional existence of the Traditional Latin Mass, but it did something much more that even most traditional Catholics don't realize. Working from the arch-heretic Martin Luther's own manual, it set up "National Bishops Conferences," which were to run Newchurch in the respective countries. No longer would bishops have authority in their own new dioceses. There would be no more St. Augustines, St. Athanasiuses, St. Basil the Greats, and St. Martins who would individually stand up against heresies and heretical popes. No, the "institutional Church" would become a bureaucratic entity, like the Protestant sects, taking votes on doctrine, morals, and worship.

Bergoglio has already already turned over the governing of new church to an Executive Committee of nine new cardinals on April 13, 2013. On December 10-12, 2015, they held their twelfth meeting. The topic of the meeting was Bergoglio's order to "decentralize" new church — that is a code word for turning it into a Protestant-style voting assembly to determine doctrine, morals, and worship.
But Bergoglio wants to go even farther than that. In his November 26, 2015, document Evangelii gaudium, Bergoglio mapped out a "conversion of the [New] papacy” to “a juridical status of episcopal conferences that would see them as subjects of specific attributions [of power], including genuine doctrinal authority, has not yet been sufficiently elaborated." READ THAT SENTENCE AGAIN! In Bergoglio's anti-Catholic Newchurch, the new papacy will be eliminated, and in its place National [New] bishops Conferences will have the authority to change doctrine. Changes can be expected as early as the next meeting in February 2016.

At the October 2015 Anti-Synod on the Family, the Bergoglio's Plan was invoked by Abbot Jeremias Schroder to delegate to each National [New] bishops Conference the power to implement his own doctrinal conclusions on such matters as homosexuality and divorce/remarriage. It was said that a majority of the Anti-Synod was in favor of taking centralized doctrinal authority way from the new pope and delegating it to the National new bishops' conferences.
New cardinal Reinhard Marx, a member of Bergoglio's Executive Committee, has demanded that New papal powers be delegated to the National New bishops' Conferences, not even to Newchurch-wide synods. "We are not just a subsidiary of Rome," he puffed. "Each bishops' conference is responsible for the pastoral care in its culture and has to proclaim the gospel in its own unique way. We cannot wait until a synod states something, as we have to carry out marriage and family ministry here." [Some information for this Commentary was contributed by LSN.]

True Catholics, you are indeed living in historic times. You are seeing with your own eyes the destruction of the Catholic Church as the institutional Church and turned into a Protestant sect. It must be obvious to you by now that New church is not the Catholic Church. God is truly favoring you in giving you the opportunity to join with your predecessor Catholics in the early Church, who had to stand against government attacks against their Catholic Faith, against heretics in their midst (including Church clergy), and against false popes.
Many of your predecessor Catholics for their courage saved their souls and now see God in the face. You too have that opportunity, if only you stand with Christ and His true Faith against the anti-Catholic Newchurch and its false new popes.
*****************************