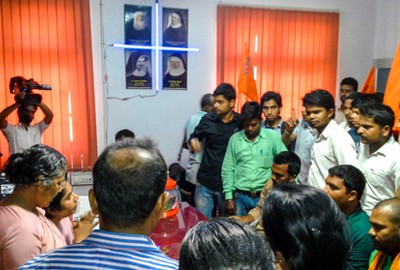 Christians see a growing trend of harassment of minority-run institutions in Jharkhand state.

Christian leaders say the attack is evidence of a mounting fundamentalist campaign against missionary-run schools in Jharkhand state.

Police in Hazaribagh city, where the attacks occurred, said a group from Akhil Bharatiya Vidyarthi Parishad (ABVP), the student wing of India's ruling Bharatiya Janata Party (BPJ), were trying to close down the two schools.

The young men “broke open the gate and jumped off the boundary wall to get inside one school. Police arrived on time and there was not much damage," Arvind Kumar Singh, deputy superintendent of police in Hazaribagh, told ucanews.com.

Singh said police arrested 16 people in connection with the attacks for forcefully entering a school and disturbing students.

Sr Clerita De Mello, principal of the Holy Cross School, told ucanews.com the attackers carried ABVP flags and also shouted slogans against Christians and missionaries as they surged into her office.

Sr De Mello said the unruly mob threw chairs around the office and demanded that she close the school. In a “violent and threatening tone”, some asked why the school had not erected pictures of Saraswati, the Hindu goddess of learning, and of Prime Minister Narendra Modi.

Christian leaders say Jharkhand state, ruled by Modi's Hindu-nationalist BJP, has been witnessing a campaign against Christians ever since the BJP came to power in New Delhi a year ago following a landslide victory for the party in parliamentary elections.

The attacks are "part of a plan to scare away Christian missionaries” from the poverty-stricken area, where many people from tribal communities live, said Fr Gerald D’Souza, an education advocate.

He said the attacks and campaigns "intensified" after BJP president Amit Shah visited the state and had meetings with local BJP leaders earlier this month.

Hindu hardliners have been "harassing Christian schools under one pretext or other”, he said, explaining that in most cases they complain that Christian schools are not allocating 25 percent of their seats to economically disadvantaged children as demanded by federal law.

However, a Supreme Court ruling has said that schools that do not accept financial aid from the government are exempted from the clause.

The principals of all 11 Catholic schools in Hazaribagh submitted a memorandum last Friday to the district's top officials seeking government intervention against what they see as an anti-Christian campaign.

"In an atmosphere of aggression, abuse, insecurity and threat, it has become very difficult for us to focus on our normal work of running the schools," education officials said in the memorandum.

Fr PJ James, principal of St Xavier's school, said the mob reached the gates of his school after leaving Holy Cross, but police arrived in time to intercept them.

He told ucanews.com that the police took five members from the group to meet with him. "I'm not sure what they were opposing or protesting. They wanted me to close down the school, saying that we have commercialized education. It was no point in reasoning with them," he said, adding that a Muslim-run school was similarly harassed.

"A pattern is emerging … and that shows they are against minority-run institutions.” However, BJP officials have denied any religious connotations were involved in Tuesday’s events.

"It was not any attack … with religious motives,” said BJP parliamentarian Ramesh Bais. “Reports we have received said a group of students were angry as they wanted the specific institute to ensure admission for socially and economically backward students. The manner of protest was in violation of the law, so police have acted.”

The arrests, he said, show the BJP is not behind targeting minority institutions.

"Jharkhand police have arrested those involved,” he said. “There's a BJP government there, so it makes it clear that we have no intention to target Catholic schools.”