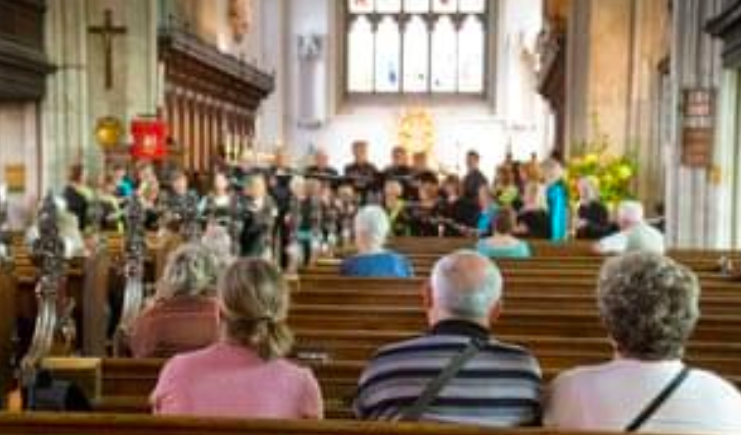 If organised mainstream Christianity is on the way out, what will replace it? A congregation in an Anglican church. Photograph: Kumar Sriskandan/Al

Note: Is religion fading out of this world, as did ‘Titanic’ which  ‘even God could not sink?’ Organized religion definitely is. In England among those under 24 only 1% claim to have any alliance with the Church of England. Even among the over-75s, only a third identify as Anglican. More than half of British people now say that they have no religion.

Non believers in any religion  called “Nones” are on a steady rise in Europe and North America that Pew Global Forum suggests there will be 1.3 billion of them worldwide by 2060. But are all ‘nones’ atheists or agnostics? Because Buddhists technically are atheists having spiritual beliefs.

In any case belief in a personal, moralistic God, who will watch over you, care about what you do, and punish or reward you appropriately, is certainly declining. In other words being part of a religion formally is not proof that one is a theist, atheist or aganostic. These groups are found in all groups.

Christians present Jesus shrouded in three different kinds of halos: 1. Sweet Jesus meek and mild; 2. Bitter Jesus rough and wild; 3. Jesus Changing moods and behavior to give just rewards or punishment to sinners and saints, that is,  a Jesus who does not hesitate to take up the whip to chase sinners into hell.

For the third and second group Jesus is both God and Man; and as Man he is able to act like a merciless judge. For the first group, God being MERCY personified, as in the case of Pope Francis and his personal German theologian Walter, it is impossible for God to be anything other than a PRODIGAL FATHER, Mercy personified!

So the central question to decide is whether Jesus is both God and Man or just MAN only. If man only, he is able to take up the whip against hypocritical high priests and brood of wipers; otherwise no. That is why today there is such a hue and cry for a new understanding and definition of God correcting the old ones like: SACHIDANANDA, EMBODIMENT OF GOODNESS(Summum Bonum); PERFECT BLISS, AN UNENDING BEATIFIC VISION or ORGASAM (a contradiction?).

Can there be waxing and waning phases, like half-moon, full-moon in God? It is for the theists of this world to come up with the right answer. Till such time the pendulum called Jesus will continue to swing with Dig-Dong sound to North and South poll.  james kottoor, editor, CCV.

Please read below the Guardian View on Atheism!

The latest British Social Attitudes survey paints a picture of organised religion’s continued decline; the more organised it tries to be, the faster it slips. The Church of England, which is established in the sense that it has a formal constitutional role, now claims the allegiance of just 1% of people under 24.

Even among the over-75s, only a third identify as Anglican. More than half of British people now say that they have no religion; about two-fifths are Christians of one sort of another; 9% are Muslims.

Across Europe and North America there is a steady rise in the number of “Nones” – people who do not identify with any religion at all. The Pew Global Forum suggests there will be 1.3 billion of them worldwide by 2060, but this figure nonetheless represents a relative decline. The great majority of the present-day Nones are found in east Asia, and especially China, where Christianity and traditional religion are both experiencing phenomenal growth. Meanwhile, demographic growth among Christians and Muslims in the global south suggest that Nones in the world will decline from 16% to 13%.

How many of these Nones are atheists? This is a tricky question to answer, since atheists can be religious, as Buddhists technically are, while non-religious people can have disorganised but spiritual and non-materialist beliefs.

Organised irreligion in Britain is even less popular than organised religion. Humanists UK claims 85,000 “members and supporters”, of whom 20,000 are full members in England (and 15,000 in Scotland); this compares with 730,000 for the Church of England’s average Sunday attendance. But the demand for humanist rites of passage is growing fast, while church baptisms, weddings and funerals are all becoming less popular, with no sign of a revival. Belief in a personal, moralistic God, who will watch over you, care about what you do, and punish or reward you appropriately, is certainly declining.

What will it mean to have a predominantly godless country? The great difficulty with answering this question is that theology and morality are only tenuously related. Habits of kindness, decency and tolerance come from practice rather than belief. Religions are justly feared because they often don’t practise the more loving parts of what they preach. But atheism is no guarantee of moral virtue or even tolerance, as the rhetoric of the “New Atheist” movement towards Muslims made very clear. Any set of beliefs about God can be used to justify selfishness and cruelty.

It is on the whole true that, in today’s world, the richer and more peaceful a country is, the more likely there are to be atheists there. Within the US, there is a very clear correlation between prosperity and atheism, and between poverty and religious belief. But which is the cause, and which the effect? The narrative that religion supplies false hope will only be popular while it appears that irreligion supplies a real one. As Auden wrote, “We are left alone with our day, and the time is short, and / History to the defeated / May say Alas but cannot help nor pardon”. If it appears that history can offer neither, people will look for help and pardon elsewhere, and evidence be damned.