Cover Image: The Church of the Gesù, located in Rome, is the mother church of the Jesuits.

Today, 12 March is a significant day in the annals of the Society of Jesus. On this day in 1622, Pope Gregory XV canonized Ignatius Loyola and Francis Xavier. Loyola the founder of the Society was truly a visionary, who was convinced that the Church and world needed a group of men who would transcend the ordinary, go to the peripheries and do all things for ‘the greater glory of God’. Xavier, in many ways, as a missionary par excellence, actualized this vision traversing India and other countries in Asia bringing the “good news” to all. 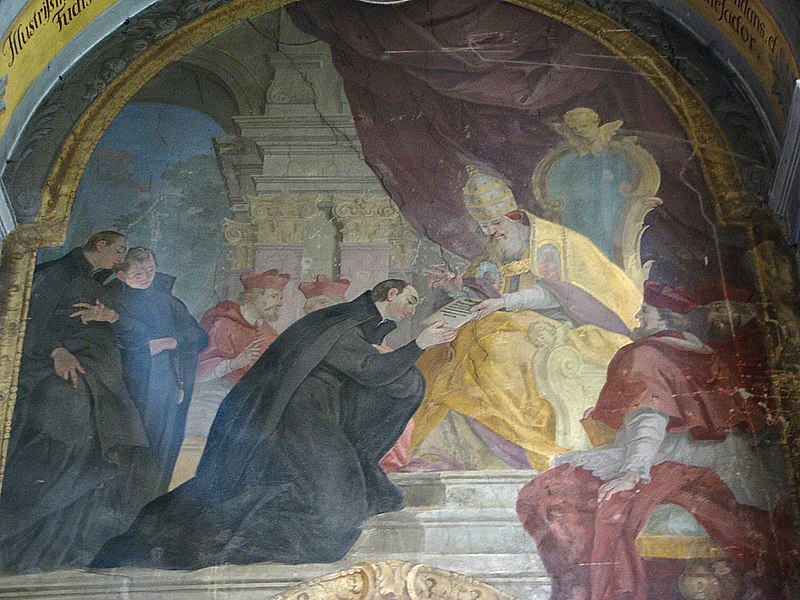 The day also marks the conclusion of the ‘Novena of Grace’, in honour of St Francis Xavier. This novena, which traditionally begins on 4 March, has become very popular all over the world. Significantly, we began today here at St. Joseph’s Community in Beirut the annual canonical visitation to the community by the Provincial Dany Younes. This evening, he presided over the Community Eucharist, in which he stressed the need for ‘accompaniment’. At the community get-together, which followed, we felicitated Scholastic Amir Adel who has successfully completed his studies in the University.

A Japanese depiction of Francis Xavier, dated to the 17th century. From the Kobe City Museum collection.

It was also an absorbing day visiting some of the educational initiatives run by the Jesuit Refugee Service (MENA) in Bar Elias, in the Bekaa Valley. Michael Smith is a Jesuit from New Zealand who now works with the JRS at the International Office in Rome, as the person responsible for education. He was impressed by the resilience of the children in the schools and the dedication of the staff. Douglas Jones (a second year Jesuit novice of the Maryland Province, US), is in the Bekaa valley for a four-month stint with JRS there. For Doug, “being in the midst of refugees is a very enriching experience. Here I have the opportunity to experience a very different type of life; in a way breaking out of my confines. I am actually doing the ‘accompaniment’ which I have been formed to do so!”

From 4-9 March, the St Joseph’s University (USJ) organized a special ‘Jesuit Week’ for their students, staff and others. The events of the week- focused on four extraordinary Jesuits. Nicolas Kluiters, a Dutch Jesuit who was murdered in the Bekaa valley sometime in March 1985. Frans Van Der Lugt, also from the Netherlands was killed in Homs Syria in April 2014. Both Nicolas and Frans are still warmly remembered for being in the midst of people, caring for them, and ultimately being called to the supreme sacrifice. Alberto Hurtado, was a Chilean Jesuit, who spent a lifetime communicating Catholic Social Teaching and providing shelter and food to thousands through his ‘Hogar in Christo’. Pedro Arrupe was the Superior General of the Society of Jesus when he founded in 1980, the Jesuit Refugee Service to serve, to accompany and to advocate for the refugees and the displaced in South East Asia. JRS continues living his vision today in fifty countries across the globe.

We have also begun a Jubilee Year. On 9 March, we celebrated the 450th birth anniversary of Aloysius Gonzaga a great Jesuit Saint. In a letter addressed to the ‘Whole Society’ the Superior General of the Jesuits Arturo Sosa writes, “the Holy See, mindful of the anniversary of the birth of Aloysius Gonzaga, has announced the celebration of a Jubilee Year of St. Aloysius, from March 9, 2018, until the same date in the year 2019”.We are also reminded that in a few months from now (15 August) we will also observe the 450th death anniversary of another wonderful Jesuit Saint Stanislaus Kostka.

Fr. Arturo goes on to say, “It is time, therefore, for us to listen to them and ask ourselves how we can help young people grow so deeply in their faith and love for Christ that they may, with a courage similar to that of Aloysius Gonzaga, confront the idols of the dominant culture. Bearing in mind that he died serving people who were not only sick of the plague but also abandoned without hope in the streets of the city and regarded with fear, it is time for us to examine how we, as ministers of the reconciliation that Christ offers humanity, can help young people today to overcome all kinds of fear and anger, often stirred up for political reasons against those who are “different” or “other,” expressing instead welcome, trust, and compassion. Finally, knowing that Aloysius Gonzaga saw religious life as an inspiring personal way of offering one’s own life for others, we must ask how we can present the Society of Jesus and religious life to young people today as a joyful life choice, aimed at serving and giving life to others”.

Ramiro Erviti, was another great Jesuit. 11 March was his birth anniversary; he died in 1986, at the age of fifty-six, very unexpectedly in rather tragic circumstances. He reached out to the poor of Gujarat in a way few others have done. He cared very much for the displaced and the migrants, the slum dwellers and the tribals – doing all he can to give them a more dignified live. He gave and did not count the cost.

Tomorrow 13 March, we celebrate Jorge Bergoglio, our Jesuit brother on the fifth anniversary of his election as Pope. In amazing ways, Pope Francis has touched the hearts and lives of millions of people everywhere. He is today the undisputed world leader. We thank God for him.

So much keeps happening all the time. But the fact is that Jesuits: yesterday, today and tomorrow – continue to be inspired by Ignatius Loyola and live the mission of the ‘magis’, wherever we are; above all, trying to internalize and live his prayer:

“Take, Lord, and receive all my liberty,
my memory, my understanding,
and my entire will,
All I have and call my own.

You have given all to me.
To you, Lord, I return it.

Everything is yours; do with it what you will.
Give me only your love and your grace,
that is enough for me”.

* (Fr Cedric Prakash SJ is a human rights activist. He is currently based in Lebanon, engaged with the Jesuit Refugee Service (JRS) in the Middle East on advocacy and   communications. Contact: cedricprakash@gmail.com).