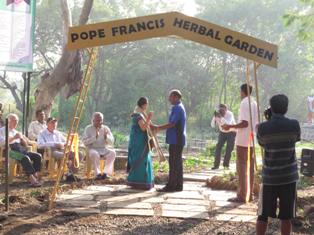 Pune (Story – Matters India): A green group in a Jesuit philosophy college in Pune, western India, has set up a herbal garden and named it after Pope Francis.

The Pope Francis Herbal Garden, started by the De Nobili College Tarumitra (friends of trees) Group on December 8, has some 70 varieties of medicinal plants.

The news about the garden drew the office in charge of the local police station who came to De Nobili to take advice to start a herbal garden in their station premises, said Father Edward Mudavassery, former head of Jesuits in South Asia now residing in Pune.

Jesuit Father Ted Bowling, who has been pioneering tree plantation in the campus, opened the garden in the presence of students, staff and a few guests, Father Mudavassery added.

Present on the occasion was Vidya, a surgeon, who is active in promoting research in medicinal plants.

Laudato si’ (Praise Be to You) is the second encyclical of Pope Francis that speaks of caring for environment.

The Pope uses the encyclical to critique consumerism and irresponsible development, laments environmental degradation and global warming, and calls all people of the world to take “swift and unified global action.