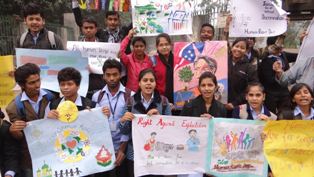 Jesuit Father T Nishaant, principal of St Xavier’s College, said the event aimed to sensitize students about the plight of the marginalized and the disposed.

Hundreds of student and teachers joined the road show and raised slogans on the theme of equal rights for mankind. Vehicular traffic slowed down as commuters and bystanders halted to listen to the students’ cry. Colorful posters not only showed students’ artistic ability, but also proved their passionate intensity in voicing a demand for justice for all, the principal said.

The show began at 10:30 am on the Digha-Ashiyaana Road. Digha is a western suburb of Patna, capital of Bihar state.

The program was organized under the college’s Social Awareness Committee that has organized several socially relevant events in the past.