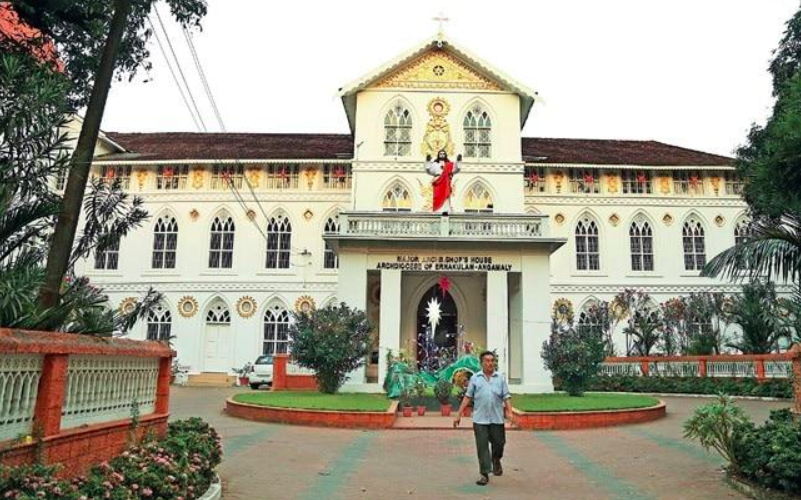 About 200 own priests of diocese, instantly and spontaneously  protesting against the reinstatement of an accused Cardinal, by the Vatican, is something out of the ordinary! In such a situation, we are left wondering, what kind of a moral character could that person be, who still wants to impose himself as their ruler, a Cardinal of the Catholic Church to boost?

Priests, bishops and cardinals are expected to call themselves servants doing "foot-washing ministry” to the poor and not rulers who lord it over to make helpless subordinates to grin and bear.

May be foot-washing ministry on Maundy Thursdays is just for show only. But a Pope Francis who promptly fell on his knees to kiss the feet and beg the African Muslim warring factions in Sudan, to stop fighting, does not convey that message. Then how is it that Cardinal Alanchery is not touched by the humble, simple self-effacing example of Francis?

Myself, being a member of the Archdiocese of Ernakulam and being sufficiently informed about the honestly of many priests arrayed against the Cardinal and not wanting to  sit in judgment on a person about whom, once I wrote gloriously, I am tempted to think in these lines and ask at the same time: “Who am I to judge?”

So I stop short of judging but I can’t in the least approve of what is happening in Ernakulam Bishop’s house, where a Cardinal takes possession of a re-instated  seat by night (not waiting for the day to dawn) and sends out orders to two auxiliary Bishops to vacate house before stipulated time and hour, and that without pointing out any of their wrong doings!

At least one is forced to say, Ernakulam Bishop’s  house is in terrible mess, where “transparency” has taken flight from every occupant, and together with it the One who said: I have spoken openly (Palam locutus sum).

To cover up one lie, it is said, one may have to say a thousand lies. The  Ernakulam land sale scandal and restoring a clean image to the tainted Cardinal, seems to be of that type. In any case truth must be found out and transparency must be made to triumph.  james kottoor, editor CCV (USA).

Kochi, June 29, 2019: Crisis seems to have deepened in Kerala’s Syro-Malabar Catholic Church with about 200 priests of the Ernakulam-Angamaly Archdiocese protesting the Vatican’s decision to reinstate Cardinal George Alencherry as their archbishop with all administrative powers.

Launching a scathing attack on the cardinal, the priests made it clear that they and the faithful could not accept him as their archbishop as he is an “accused in financial misappropriation cases related to the church land deals.”

Meanwhile the Archdiocesan Movement for Transparency (AMT), a combine of priests, religious and lay people demanding more transparency in the functioning of the Syro-Malabar Archdiocese of Ernakulam-Angamaly, has claimed that a press release from the Syro-Malabar Church Media Commission on June 27 was “misleading and confusing.”

The media commission said Cardinal Alencherry, head of Syro-Malabar Church, secured full powers as the head of the Ernakulam-Angamaly Archdiocese after the Vatican asked Apostolic Administrator Bishop Jacob Manathodath to go back to his Palghat diocese. The Vatican appointed Bishop Manathodath as the apostolic administrator in 2018 after suspending the cardinal’s administrative powers over the archdiocese.

An AMT statement on June 28 said the media commission’s claims caused “anxiety” among the faithful. The priests of the archdiocese, who met at nearby Aluva on June 28, also adopted a resolution slamming the Vatican’s Oriental Congregation’s decision to suspend two auxiliary bishops of the archdiocese from the offices.

“This can be seen only as an act of vengeance,” they said in a statement on June 28.

Questioning the decision to suspend Bishops Sebastian Adayanthrath and Jose Puthenveetil from their offices, the priests said no convincing documentary proof has been produced by the Synod of Syro-Malabar Church to justify the decision.

Rallying behind the suspended bishops, the priests, who had earlier fought Cardinal Alencherry over a controversial land deal in the archdiocese, allegedly involving him, sought to know why both the bishops were suspended. They said the Oriental Congregation, which has authority over all matters relating to the Oriental Churches, and the Syro Malabar Synod have the responsibility to convince the priests and laity of the decision to suspend the bishops.

They also urged the Oriental Congregation and Synod to convince them and the laity about the “serious lapses and corruption” in the land deal. Stating that the Vatican’s decision to reinstate Cardinal Alencherry has affected the faithful, the priests said they would not cooperate with the archbishop, who has no moral right to rule over them.

Cardinal Alencherry had secured full powers of the archbishop of the archdiocese on June 27 after the Vatican directed Bishop Manathodath to return to his diocese. The Media Commission had said Pope Francis took the decision in the light of studies carried out on different levels over the recent developments in the Ernakulam-Angamaly Archdiocese.

The AMT statement expressed concern that Cardinal Alencherry has returned to head the archdiocese with full powers despite causing “massive financial losses” to the archdiocese. “This step cannot be believed to have been taken by the Pope,” the movement claimed and alleged that the Media Commission presented the decisions and steps taken by the Congregation for the Oriental Churches as the Pope’s decisions.

The media commission statement said that the Pontiff had expressed his gratitude for the responsibilities carried out by Bishop Manathodath as the apostolic administrator. However, Cardinal Alencherry’s “temporary” return to power has been attributed to the Congregation for the Oriental Churches, the AMT statement added.

In 2018, a division bench of the Kerala High Court had set aside a single bench order, directing police to book Cardinal Alencherry and three others over alleged irregularities in land deals in the archdiocese. The bench had said the single bench order “suffers from legal infirmity and deserves to be set aside.”

A six-member inquiry committee appointed by the Church to probe alleged irregularities in the land deals had said Cardinal Alencherry “seems to have fully known and involved” in the alienation and purchase of lands by the archdiocese between April 1, 2015 and November 30, 2017.

The panel, comprising priests, was appointed by Cardinal Alencherry after some priests and faithful accused him of selling the archdiocese’s prime land for “a very low price.” The Syro-Malabar Church has more than 30 dioceses in India and four outside serving over five million faithful.

What a Himalayan blunder made by the Holy See in reinstating Cardinal George Alencherry as the Archbishop of Ernakulam-Angamaly Archdiocese, against whom serious cases about dubious land dealings are pending in civil courts!!!

Taking a parellel, the Major Archbishop must remain in his Curia, looking after the matters regarding the Syro-Malabar Church in general, while the real governing of the Ernkulam – Angamaly Archdiocese is to be carried out by the two Auxiliary Bishops. Now Rome has made everything topsy-turvy!!! What an abominable predicament into which the Syro-Malabar Church plunged only to save 'a tainted Prince(?) of the church' sacrificing the innocent auxiliary bishops!!!!!!!
Such acts from Rome really causes suspicion among the ordinary faithful whether the Pope is really aware of the true situation and happenings in Ernakulam-Ankamally Archdiocese and about the Syro-Malabar Major Archbishop.

Are vested interests playing in between? Many past incidents, which are known to the clergy as well as the lay people, regarding important issues in the Syro-Malabar Church, where the people of vested interests had tried to wield their sinister actions to either hide or distort or even annihilate the true facts and figures!!