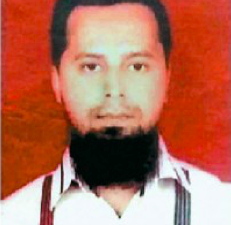 In the pic: 35 year old youth from Mumbra believed to be key recruiter; he has been arrested along with a dozen others from Karnataka and Hyderabad.

(Note: A few days ago there as the report of the first  ISIS directed terrorist attack in  Asia, Jakarta, Indonesia. Now comes this report of the arrest of a dozen in Karnataka. Is  Karnataka  becoming a crucible of nefarious terror activities? Is the ISIS spreading like a cancer to make its foot hold in every part of the world? There must be something mesmerizing about them, some attractive truth and idealism that unites them and makes

them appealing to the youth.. Finding it out is the key to understanding ISIS and without doing that we can’t deal with them effectively for or against. If the arrests are done,nas reported, without showing identity cards etc. it raises suspicion on the part of law enforcement authorities. Cesar’s wife must be above reproach. This applies to all activities of law enforcement authorities. jmes kottoor, editor)

Mumbai : In major swoop, more than a dozen sympathizers of the ISIS were picked up for interrogation by the National Investigation agency on Thursday night and Friday. Five of them have been arrested and the others are being interrogated. Most notable among those arrested was a 35 year old youth from Mumbra on Thursday night in a joint NIA-ATS operation.

The sleuths have also arrested six suspects from Karnataka — four from Bengaluru and one each from Mangaluru and Tumkuru, making Four suspects were picked up from Hyderabad as well.

The suspects were arrested after they were kept on the radar by the NIA for their online activities connected with the ISIS and were reportedly part of a bigger module planning to strike various targets in India on January 26. Recently four persons with suspected ISIS links were arrested in Uttarakhand as well.

The Mumbra suspect was identified as one Mudabbir Mustaq Shaikh, a resident of Reshma Co-operative Society in Amrut Nagar. A graduate from a Thane-based college and a computer software diploma holder, Shaikh was jobless and would spend most of his time at home. He is said to have been very active on various social media platforms where he came across an ISIS handler who later brainwashed Shaikh into becoming a sympathizer of the terrorist group.

Shaikh is also believed to be one of the main ‘recruiter’ for the ISIS and has been in close contact with various outfits across the nation. It is learnt that Shaikh used social media extensively to approach youngsters. ‘‘We believe that he is a key recruiter from India,” a senior officer from Mumbai ATS Unit said. His mobile phone and laptop have been seized and sent for forensic examination.

Later in the day Shaikh was produced in an NIA court in Mumbai, where the agency sought a 3-day transit remand so that he can be produced before a Delhi court. When the FPJ approached the family of Shaikh, his father-in-law Ahmed disclosed that Mudabbir had come to Mumbra four years ago and was jobless for the last two years. Since he was jobless, he would spend most of his time in the house surfing the net on his laptop and mobile phone.

They Pointed A Gun At My Head

It was a midnight knock that woke up Bushra; she lives in an apartment with her husband, Afzal, a software engineer. The men who entered, she said, proclaimed they were from the Delhi Police, but offered no proof of identity. Bushra told NDTV that the men pointed a gun at her before taking Afzal away, handcuffed, for alleged links to ISIS. “They showed me no identity cards, no papers at all, no search warrant, no arrest warrant. On what basis did they take my husband? Nothing was disclosed to us,” she said, describing her husband as “very, very innocent.”