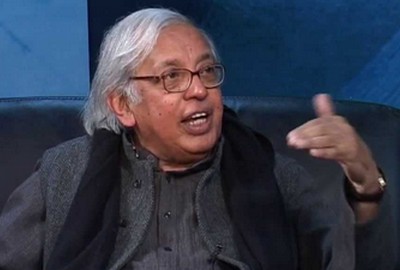 The former civil servant said none of those who returned the awards said the country was intolerant.

Kolkata: (UCAN) Describing intolerance as a huge crisis faced by the country, eminent poet Ashok Vajpeyi on Thursday hit out at the "corporatisation" of politics, saying its sole aim now was to remain in power.
Participating in the inaugural session of the Kolkata Literature Festival, Vajpeyi also expressed anguish over the suicide of Dalit research scholar Rohith Vemula.
"It's not just a mere question of having debate, dissent and diversity of the country at stake, rather it's a huge crisis. There can't be a democracy in which dissent, debate or dialogue is undermined, or minority — not only of religion but of view points — is under attack and termed as anti-national," Vajpeyi said at the session on "Intolerance in tolerant India".
Among the first to return his awards protesting against intolerance, the Sahitya Akademi awardee pointed to the "character assassination" of the protesters.
"When we did what we did, it was to bring the issue to the people at large because it's the people who will decide what kind of India they want.
"On the social media, there has been character assassination of all of us, as if we are people with dubious characters and dubious credentials," said Vajpeyi, asserting that he will not take back his award.
The former civil servant said none of those who returned the awards said the country was intolerant.
"We never said the country was intolerant, rather forces of intolerance are being given certain attention. India as country and the people at large have been tolerant.
"It is being made out as if we are addressing the government, but we are not. We are addressing the people. Because it's them who will decide what kind of country they want," he said.
The septuagenarian also hit out at the quality of politics.
"Politics has been reduced to managerial tactics on how to remain in power instead of looking towards ensuring equality and justice."
Pointing to the growing violence in India, Vajpeyi said the reason was that the basic issues faced by the country remained unaddressed.
"Issues like poverty, injustice, inequality, illiteracy have remained unaddressed and are now made out to be invisible. Core issues are being made out to be invisible because now smart cities are being made visible, bullet trains and internet are being made visible," he said.
"In the whole debate of intolerance and tolerance, let us not forget the economical, social and cultural issues that the country is facing," he said.
Expressing anguish over the death of Vemula, Vajpeyi said the core issue of discrimination continues in the country.
"Vemula's suicide establishes the fact that places where knowledge must be free, where knowledge must be made available through debate dialogue and dissent, there is such discrimination. Instead of addressing that, we have ministers who are digging out stupid details to tell us that Rohith was not a Dalit," he said.
"As if his mother being a Dalit is not enough, even if a scholar is not a Dalit, should he be driven to suicide like that?" said Vajpeyi, questioning why the protests were being given a political motive.
"Politicians believe whatever anybody does is only inspired by some politics. Why can't people see that writers, authors and artists can function freely and autonomously?" he asked.
Later, interacting with the media, the poet said it was the Bharatiya Janata Party (BJP) and the Rashtriya Swayamsevak Sangh (RSS) which have been labelling the protesters as anti-nationals.
"There is no need to say it expressly, everybody knows that it's the BJP and the RSS which have been calling the protesters as anti-national. I was labelled as a communist but I have been at loggerheads with the communists for three decades now," he said.
"We are not saying the country or the society on the whole has become intolerant, rather there are forces which enjoy support from various sections of power whether expressly or through silence, and are flourishing.
"Allowing these forces to grow and to remain insensitive towards them is detrimental to the society, to democracy and the country's traditions which have been based on dissent, diversity and debate," added Vajpeyi.