Inside Catalonia’s cypherpunk referendum – the first in history

(Note: Despite all the efforts by the Spanish government and the Constitutional Court to halt the poll, more than 2 million people were able to cast their votes. Yet, polling also came with a high cost. Nearly 900 Catalan voters were injured after national police forces stormed polling stations across the country to seize ballot boxes.  Repression of bloggers and digital activists followed.  As concerns over internet censorship in Catalonia increased, new supports came from abroad. Julian Assange offered expertise on virtual private networks, secured communications, and the use of apps such as Firechat or Signal. He also suggested Catalans bypass the seizure of regional finances by adopting Bitcoin, the flagship of the new crypto-economy.

According to Financial Times, 29th June 2017, Catalonia has been part of the Spanish state for centuries, yet many Catalans regard themselves as a nation apart, with their own language, culture and history. The region is one of the country’s 17 “autonomous communities”, with powers over matters such as education, healthcare and welfare, and a police force of its own. Despite occasional rumblings of discontent, the arrangement was, until recently, broadly accepted by Catalans and Spaniards alike.

The referendum for independence in Catalonia on October 1 opens up an uncertain era for both Catalonia and Spain – a new period that may also impact the future of the European Union.  Isaac Gomes, Associate Editor, Church Citizens' Voice). 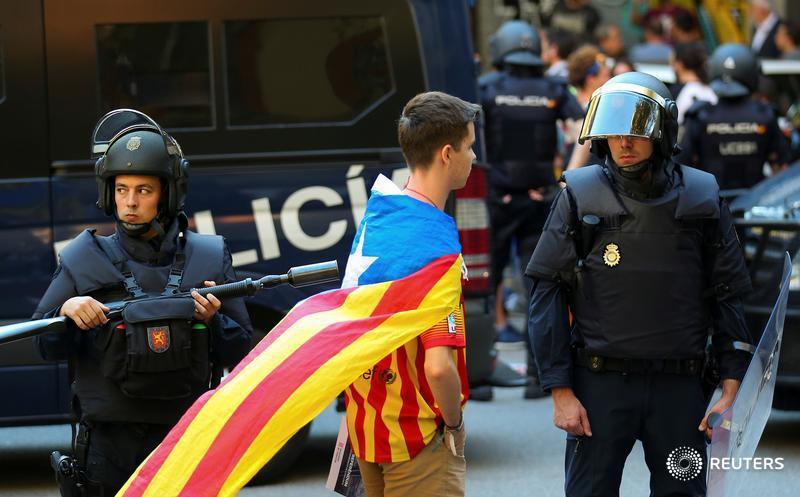 Despite all the efforts by the Spanish government and the Constitutional Court to halt the poll, more than 2 million people were able to cast their votes. Yet, polling also came with a high cost. Nearly 900 Catalan voters were injured after national police forces stormed polling stations across the country to seize ballot boxes.

Two days later, crowds of citizens took to the streets in peaceful and massive protest. So did scores of pro-referendum supporters on the internet. Blended activism at its fullest.

Protest movements turning to social media to voice their aspirations are no news. The Iranian green revolution of 2009 and the Arab Spring of 2011 famously leveraged social media for protest and coordination. In both cases, state governments reacted quickly by blocking access to social networks and shutting down the internet.

Repression of bloggers and digital activists followed. The revolutions were tweeted, but the promise of technology-enabled liberation did not hold.

In Catalonia, events took an interesting turn days before the referendum. Pro-referendum websites were closed following judicial orders. Catalan President Carles Puigdemont then took to Twitter to recommend the use of proxies to access clone sites under the .eu domain.

As Spanish ISPs blocked access to the newly published domains, tech-savvy citizens picked up 30 new ones to create mirror sites: referendum.party, referendum.fun, referendum.ninja, and referendum.love made their way on social media.

As concerns over internet censorship in Catalonia increased, new supports came from abroad. Julian Assange offered expertise on virtual private networks, secured communications, and the use of apps such as Firechat or Signal. He also suggested Catalans bypass the seizure of regional finances by adopting Bitcoin, the flagship of the new crypto-economy.

Likewise, Pirate Bay founder Peter Sunde offered anonymous hosting to censored websites through his privacy-enhancing service Njalla. The hosting website explains that Njalla is "the Sami word referring to the way of keeping the non-wanted beasts out of the stuff you care about". Catalans got the point.

The system allows users to view websites when the original server is down using peer-to-peer file transfer from other computers in the network. Contents use a cryptographic hash to guarantee authentication.

It is not that Arab spring activists did not receive support from hacker communities around the world. Quite the opposite, they came to the rescue in Egypt and Libya during internet blackouts and assisted with tools such as TOR to navigate the web anonymously. Anonymous hackers went on to put down government websites.

Yet, in Catalonia, the Pirate Party took a different approach. When Josep Jover, one of the lawyers and party's candidate, contacted the international hacker communities for support, he just made one specific request: do not attack any web of the Spanish state. No web was taken down.

Pirates' efforts to protect webs from malicious attacks, regardless of their content, would later be followed by UN experts' reminder to the Spanish government of their responsibility to respect the fundamental rights to freedom of expression, assembly, and association, and public participation.

In our digital world, those responsibilities should always extend to cyberspace, as this is the venue where fundamental rights are equally at stake.

Eventually, a combination of secure hosting of the electoral roll and the last minute announcement of a "universal census" (where voters were able to cast their vote at any polling station) circumvented the state's cyberspace tactics to block the votes on October 1. Politically contested as it is, the October 1 vote will be remembered as the first cypherpunk referendum in history.

Throughout the unusually frantic days before and after the referendum, citizens in Catalonia coordinated their mobilizations on the streets via the widely popular WhatsApp, used by 70 percent of internet users, and the fast-growing Telegram. Signal also became popular for secured communications. Recommendations, memes, and rumors traveled rapidly across platforms and went viral in minutes.

Activism advocating widespread use of encryption and privacy-enhancing technologies to bring political change in Catalonia is perhaps a sign of emerging trends on the internet: the horizontal, decentralized internet that Vint Cerf and Tim Berners-Lee, inventors of its core technologies, initially envisioned and are currently demanding.

There are many ways to enhance privacy in digital technologies, and encryption is one of them. Yet, when other fundamental rights such as freedom of expression and freedom of association are thwarted it takes a social movement, and not just technology, to defend them.

Twenty-first-century activism comes with an interesting paradox: the more it will rely on secured and encrypted networks, the more open, inclusive, ethical, and transparent it will need to be.

Marta Poblet Balcell is associate professor at the Graduate School of Business and Law, RMIT University.