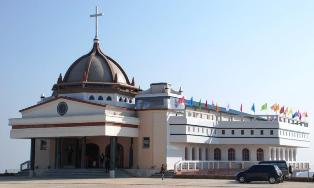 Guwahati: A casket containing the relics of St John Bosco will be kept permanently at the first shrine in India dedicated to the founder of the Salesian congregation.

The casket containing the relics arrived on February 26 at Shillong, capital of the northeastern Indian state of Meghalaya, from Turin in Italy. It will be kept for public veneration at Don Bosco Technical School, Shillong from February 27 to March 5. It will be then taken to Sohra, Cheerapunjee, 50 km south. Where it will stay permanently.

Several miracles were recorded when the relics had toured northeastern India during 2011 as part of the bicentenary of the saint’s birth anniversary. One miracle involved the healing of Larisa Khongsit, a girl from Sohra.

Larisa is the sixth of nine children of a family that followed the Khasi traditional religion. They live a small house in Thiep Twa, near Cherrapunjee. She had been unable to stand or walk for the past four years.

It all happened in 2007 while playing with her friends Larisuk fell and injured her right leg. As the wound festered she spent three months in the Civil Hospital Shillong. This brought little relief and at a certain point the doctors advised amputation to save the then 7-year-old child.

On June 19, 2011, when the relics of Don Bosco were in Sohra Larisa persuaded her mother to take her to a prayer session for healing held in the shrine grounds. She said a simple prayer, “Don Bosco please give me healing; I want to go to school again.”

Two days later when she alone in her hut, Larisa suddenly felt the urge to get up and walk to her mother who was washing clothes at a nearby stream.

Smelling puss that oozed from her wounds also stopped and rotting flesh slowly came off leaving place for new flesh. Almost a month later, on July 17, a piece of bone came out of the little opening of a large wound on her leg.

Larisa keeps in mind all these important dates.

The baptism of Larisa and 22 others was celebrated in the Don Bosco Shrine, Sohra on August 6, 2011, the birth day of Don Bosco.

Larisa was baptized as Larisa Mary Khongsit. She chose the new name at baptism. The old name meant ‘nurtured in peace’. The name means ‘I/we/they have rejoiced.’

To mark the occasion of the canonization of the saint on Easter Sunday in 1934 the Salesians under the leadership of Fr Aurelius Maschio decided to erect the first shrine dedicated to St. John Bosco in India at Sohra.

Brother Santi Montarro supervised the building of the shrine that was150 meters in length and 50 meters in breadth. It was completed and blessed on January 26, 1952, the second anniversary of India’s Republic Day.

Bishop Stephen Ferrando of Shillong, who was declared a venerable, in mid February, blessed the shrine.