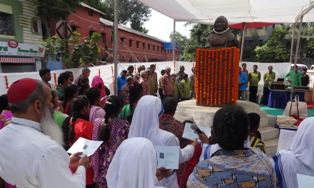 New Delhi (Matters India): Indians cutting across religions Saturday joined Missionaries of Charity nuns in special prayers to mark the death anniversary of Blessed Mother Teresa of Kolkata.
The Church observes September 5 as the feast day of the world renowned nun who died of old age in Kolkata in 1997. The United Nations observes it as the “International Day of Charity.”

In Ahmedabad, commercial capital of the western Indian state of Gujarat, several citizens from all walks of life and religions gathered at the ‘Mother Teresa Chowk’ to pay homage to the saint of the poorest of the poor.

The residents of ‘Shanti Nilaya’ (peace abode, the Mother Teresa Ashram for the dying destitute) and the children of Shishu Bhavan (the home for abandoned children), led the floral tributes to Mother Teresa.

Having a Mother Teresa Chowk in the heart of the city was a landmark decision taken by the Ahmedabad Municipal Corporation under the leadership of the then Mayor (late) Aneesa Begum Mirza in 2005. The dedication ceremony of this chowk was performed by Maheshwardasji Maharajshri, the Mahant (head priest) of the Jagannath Temple in the presence of several dignitaries of the city.

At the Saturday’s function Missionaries of Charity Sister Clare Agnes shared briefly the saintly nun’s life and her joy to follow in Mother’s footsteps, especially in her compassion and service to the poorest of the poor. She narrated the example of how a poor dying man was left at the gates of ‘Shanti Nilaya’ three days ago and how the Sisters took him in and cared for him just as Mother Teresa would have done.

Archbishop-elect Thomas Macwan of Gandhinagar called upon all to emulate the life and works of Mother Teresa specially in reaching out to the least of our brothers and sisters.

On the same day in Nagpur, a central Indian town, hundreds of priests, religious, devotees and lay associates gathered at the Missionaries of Charity Convent in, Mohan Nagar, to pay homage to Mother Teresa.

Archbishop Abraham Viruthakulangara of Nagpur, who was main celebrant, recalled his association with the world renowned Catholic nun when he was the bishop of Khandwa diocese in the central Indian state of Madhya Pradesh.

Father Rocky, who preached the homily, recalled meeting Mother Teresa during his seminary days. She told the seminarians, “You should be a holy priest otherwise don’t become priests.” Blessed Mother Teresa saw the needy and underprivileged in the Sacred Host and Jesus in the poor, he added.