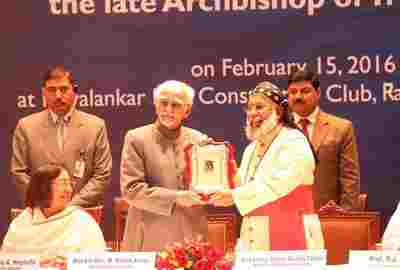 Archbishop Benedict Mar Gregorios' dedication to the poor can be an example for nation building.

Ansari was speaking at a national conference in New Delhi to mark the Feb. 15 concluding ceremony of the yearlong birth centenary celebrations of the archbishop.

"He was a promoter of interreligious dialogue and harmony who was ever willing on behalf of the administration to solve the issue of communal tension," Ansari said.

Archbishop Gregorios headed the Syro-Malankara Church for over four decades until his death on Oct. 10, 1994.

Archbishop Gregorios was the first Syrian president of the Indian Catholic bishops' conference of India (1989-91), and he chaired several of its commissions.

Archbishop Gregorios is known for his work for the poor. He fought against luxury and extravagance and was known for his social welfare activities, development initiatives, interreligious dialogue and promotion of political harmony.

"The true motto of all his religious and social involvements was his spiritual depth. He was not limited to any particular caste, creed or religion and believed that integrity could be achieved through maximum possible development of all," said Cardinal Baselios Cleemis of Trivandrum, head of the Syro-Malankara Church and president of the Indian bishops' conference.

"The vision needs to be continued for bringing up the poor and interreligious harmony. We lack people like him and that is why there are so many problems in this world," Syro-Malankara Bishop Jacob Mar Barnabas of Gurgaon told ucanews.com.

Archbishop Gregorios joined the Bethany Ashram of the Order of the Imitation of Christ, the Syro-Malankara Church's only religious congregation. He became Benedict and took monastic vows in 1935.

When he became bishop in 1953, he wore saffron, the color of Bethany priests. Since saffron is the color of Hindu hermits, in those pre-Second Vatican Council days, his choice raised many eyebrows among Catholics.

He was busy with more than strictly church work. For poverty alleviation in villages, the archbishop recommended scientific and systematic farming of fish, poultry and vegetables. He used his church land for model farming.