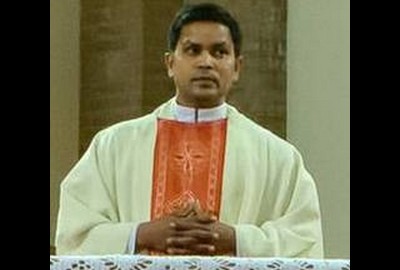 The priest is currently pursuing his studies in both Rome and Ireland.

An Indian priest, who arrived in Ireland only two weeks ago, was stabbed and beaten during a robbery in Laois. Fr. Dominic Savio was left deeply shocked after being held at knife-point by two burglars who broke into the Portlaoise parish house July 18.
The priest was lucky to escape with only minor cuts to his hands and neck. This attack followed a brutal and unprovoked attack on a Welsh tourist in Dublin city centre just hours after he arrived here on holiday.
The priest, however, defied his injuries and trauma to celebrate the morning Mass the following day at Ratheniska. But Fr. Savio said he will not let the shocking experience alter his impression of Ireland.
"I like Ireland, the people have been very friendly towards me and I hope to continue my work here," he said.
The priest is currently pursuing his studies in both Rome and Ireland. He arrived in Portlaoise earlier this month to provide clerical cover for two local priests, Fr. George Augustine and Fr. Paddy Byrne.
Both were overseas with the annual parish pilgrimage to Lourdes. It is suspected the two burglars may have initially believed the parish house in Portlaoise was empty.
However, when Fr. Savio opened the door at 11.30pm, the raiders violently pushed him back inside, held him at knife-point and robbed him. One grabbed the priest by the neck and, holding the knife to his throat, forced him upstairs as they searched for cash.
Both men later fled and Fr. Savio was eventually able to raise the alarm via an Indian family he had been introduced to in Portlaoise. Monsignor John Byrne described the incident as "truly shocking" and said the young cleric had been "absolutely terrorized".

"It is a terrible thing to happen but the Portlaoise community has rallied to support Fr. Savio and show that this is not typical for this area or Ireland," he said.
Source: Herald