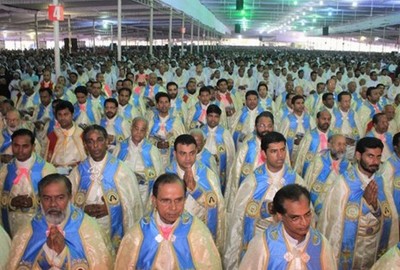 St Ignatius’ Church, opened in 1836, was due to be merged with the nearby English Martyrs Church because of a shortage of priests. Parishioners said they were stunned by the decision.

But on New Year’s Eve, Bishop Michael Campbell received a letter from Cardinal George Alencherry requesting a church and presbytery for Syro-Malabar Catholics under the charge of Father Mathew Jacob Choorapoikayil.

Bishop Campbell said: “I readily welcomed this request from Cardinal Alencherry, Major Archbishop of the Syro-Malabar Church, as I believe that St Ignatius church and presbytery will be a wonderful and vibrant centre for the St Thomas (Syro-Malabar) Catholics in Preston.”

There are an estimated 17,000 Syro-Malabar Catholics in England, with four million worldwide. The Church traces its origins to the Apostle Thomas, who according to tradition travelled to Kerala in AD52. The Church has had a chaplaincy in Lancaster since 2004, and there are more than 100 Syro-Malabar families in Preston.

The community has grown out of the local hospital which employed migrants.

Fr Matthew added that Bishop Campbell and his predecessor Bishop Patrick O’Donoghue “have been very good to us, have welcomed us and given us our opportunity”. He also said that there would be an official opening Mass announced shortly.

Appealing to the Catholics of Preston, Bishop Campbell said: “I am hopeful that local Catholics will genuinely rejoice in what is both an imaginative – and surprising – decision and will be proactive in their support of our brother and sister Syro-Malabar Catholics going forward.”

St Ignatius is a Grade II listed building with an interior designed by Augustus Pugin. An estimated 140 people attended its last Mass in November. Parishioner Ralph Cooper had said the decision to close the church had come as a “bolt from the blue”.