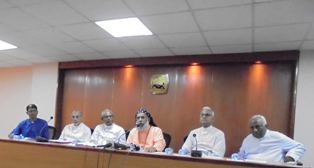 (Note: It is the Biennial meet of all Catholic Bishops of India, which includes all three Rites: Latin, Syromalabar and Syromalankara.Together they make up 170 dioceses. Since the number of bishops are made up of retired and auxiliary bishops, total number of bishops exceed 180 in number. The report says more than that number is meeting in Bangalore from March 2 to 9. The main theme of the meeting is: “The Response of the Church in India to the Present Day Challenges.” One of the out-of-the-ordinary happenings at this conference is the invited presence of Cardinal Donald Wuerl, Archbishop of Washington as the chief guest on the occasion and Justice Cyriac Joseph to give the keynote address. They are welcome developments.

The rather unwelcome aspect seems to be lack of advance publicity not  given for such a national Catholic event in the country. Await more comments on: “why and    how?” james kottoor, editor)

Bangalore: More than 180 Catholic bishops and scores of priests are now in Bangalore, southern India, to help the Church respond to current challenges in the country.

A group of experts comprising religious and lay people will assist the prelates at the March 2-9 biennial plenary of the Catholic Bishops’ Conference of India (CBCI) at St. John’s National Academy of Health Sciences.

The CBCI is the apex body of the Catholic Church in India. Its members comprise active and retired bishops of 170 dioceses belonging to the three ritual Churches in the country.

The conference holds the plenary assembly every two years to address various aspects of Church in India and the challenges it faces. The assembly also charts common action to revitalize the Church to help it serve its people and society better.

The main theme of the latest assembly is “The Response of the Church in India to the Present Day Challenges.” At a media conference held in Bangalore on March 1, CBCI president Cardinal Baselios Cleemis said the assembly offers an opportunity to “deepen our faith and faith commitments.”

The cardinal, who is also the head of the Syro-Malankara Church, said the Catholic Church in India is committed to protecting the “credible secular fabric” of the country.Secularism, interreligious dialogue and pluralism are among some issues the assembly will address, the prelate added.

Terming India as a “pluralism lived country,” the cardinal said the Indian Christians have the constitutional space to “believe, profess and propagate” their faith.He also said the Church will continue with greater commitment its services in the areas of education, health, poverty elimination and other charity initiatives to benefit the poor.

A major thrust of the assembly, Cardinal Cleemis, said will be promotion of acts of mercy. Pope Francis has declared 2016 as the Year of Mercy.

They described acts of mercy as showing compassion to the poor and the downtrodden in the country. During the assembly, the bishops will be assisted by a group of 20 priests responsible for the various CBCI offices and centers, an expert team of Religious and a panel of resource persons from the laity and other religions.

The bishops will also interact with the Conference of Religious India (CRI) and the Catholic Council of India. The assembly will begin March 2 morning with Mass presided over by Apostolic Nuncio to India Archbishop Salvatore Pennacchio. The CBCI president will chair the opening session where the nuncio will deliver the inaugural address.

Cardinal Donald Wuerl, Archbishop of Washington, will be chief guest on the occasion. Justice Cyriac Joseph, acting chairperson of the federal National Human Rights Commission, will give the keynote address at the assembly.

Other speakers include More Sadanand, Inam Dar, Guilherme Vaz, Romy Chacko, Michael Dias, Sister Shalini Mulackal and Father Mohan Das.One of the highlights of the assembly will be the joint celebration of the CBCI-CRI on March 5.Religious men and women of India will join the bishops for Mass and a cultural program.

The joint celebration will mark the end of the Year of the Consecrated proclaimed by the Pope and as a goodwill gesture of the gratitude of the CBCI to the thousands of Religious who serve the Church in India with dedication and sacrifice, the office bearers explained.

The bishops will issue a final statement highlighting the main thrust of the deliberations and the future course of actions. It will help Catholics in India to study and implement the bishops’ deliberations.