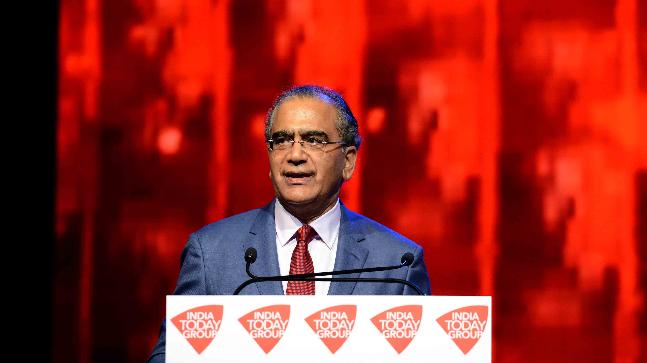 In this report, India Today Chairman Aroon Purie talks of the Great Churcn (upheaval or Samudra Manthan in Indian Mythology) which has taken place the world over – the USA's President Donald Trump causing a great commotion in the developed and developing world by his topsy-turvy pronouncements on his election promise "America First"; his on-going collision with the American Media; his blowing hot and cold with China and North Korea; the expansionist march of the China juggernaut even to the extent of change of Chinese Constitution to make Xi Jinping's tenure lifetime; Russia's President Vlamidir Putin always on the prowl and getting stronger than ever; splintering of the European Union thanks to Brexit; the Middle East remaining on fire and being plagued by religious extremism and brutal wars with no real end in sight with two super powers USA and Russia soaking their hands in blood and untold destruction; unabated cross-border terrorism from Pakistan backed by China – notwithstanding the much-trumpeted "Surgical Strike"; the Rohingya problem and the middle east refugee problem; the USA walking out of the Paris Climate Accord and in doing so demolision of everything that the 2015 papal declaration “Laudato Si’ represents. As a result humanity is once again bent on ignoring the warning signs of “Laudato Si’ and climate change.  Let us hope India Today Conclave 2018 brings out some positive thoughts for positive results.  Isaac Gomes, Asso. Editor, Church Citizens' Voice.

It's great to be back in Mumbai. I see a lot of familiar faces — so we must have done something right by moving the conclave to your great city.

A warm welcome to all of you to the 17th edition of the India Today Conclave with its theme 'The Great Churn: Triumphs and Tribulations.'

And, what a Great Churn there has been.

America is withdrawing from its global leadership role. As a whimsical and boastful president dismantles the world order his country built. At home he's at war with his own White House and security establishment. Chaos prevails in America.

China's inexorable rise continues. It is no more just a factory for the world but a muscular, aggressive power on the world stage, well on its way to Super Powerdom.

With Vladmir Putin as President, Russia is constantly prowling and growling. Their interference in the last American presidential elections is dominating the domestic politics of America. And ironically, undermining the very President he wanted elected.

The European Union is splintering. After Brexit and the migration crisis, many countries in the European Union have seen the rise of a new extreme kind of nationalism, shaking the foundations of the most progressive union of nations in recent history. It is, in fact, a slap in the face of history. Turning the clock back.

The Middle East remains on fire. It is plagued by religious extremism and brutal wars with no real end in sight. It remains the bloody playground of the two super powers.

The Afghan war continues as the American presence clocks its 17th year. It is fighting a war it cannot win or afford to lose.

Meanwhile, nuclear brinkmanship is back. Leaders are behaving as boys do with toys but with really dangerous ones. The American President even claims his nuke button is bigger than Kim Jong Un's. Unbelievable!

Nearer home, Pakistan brandishes its nukes at us and the Line of Control has descended into a Line of No Control with constant exchange of fire. And cross border terrorism remains unabated.

As if bent on its destruction, humanity is once again ignoring the warning signs of climate change. The World it seems cannot save the Earth.

The world, in fact, has become an extremely dangerous place.

But all is not gloomy. We have our Great Triumphs too.

The global economy is growing at a rate of 3.5 per cent after a slump of seven years.

Technology continues to be on a super fast track and is now powering the Fourth Industrial Revolution. It's making our world a better place, making human beings healthier, more productive and hopefully happier.

This Great Churn, has also, I believe, thrown up Five Paradoxes we have to deal with in the years to come.

How we deal with them will define the 21st century.

The first paradox is the most dangerous: The return of Nationalism in a super connected globalised world.

The forces of protectionism are rising. Country after country is throwing up barriers to trade, movement of people and even ideas.

The forces that separate us are becoming stronger than those that unite us.

Tonight you will be hearing from an extraordinary thinker of our times, Yuval Noah Harari, who will be talking about 21st Century Nationalism.

The second paradox is the threat to democracy. Democracy is the cradle of freedoms but these freedoms are being diminished — by fundamentalism, majoritarianism and general intolerance. It's the rise of illiberal democracies. A kind of lumpenised Democracy.

Look at what's happening in our own country.

Movies are banned without being seen. People are killed for storing the wrong kind of meat or for transporting an animal.

History is being re-written to demean national treasures while roads are being renamed because they glorify evil empires and statues are being brought down because they are identified with another ideology.

The media is constantly threatened with violence by all kinds of groups.

We have become a Republic of the Offended.

Just waiting for someone to affront us and make a cause celebre of it.

When there is silence or inaction, bigotry gets emboldened.

Reasoned debate is descending into cacophony even in Parliament.

I am sure Mrs Sonia Gandhi, who you will hear after me, will have something to say about all this. I look forward to that.

In the highest temple of justice, the Supreme Court, judges are openly squabbling with each other.

Bureaucrats and law enforcement officers are being assaulted by politicians.

And the bureaucracy seems to exist to serve itself and not the people.

When all this happens you know democracy is in peril.

As India can be governed only as a democracy.

The Third Paradox is the rise of the Maximum Leader.

One would think under a strong leader society would be more united and we would all have a more peaceful existence. The opposite has happened. Societies are far more riven with strife than they were before.

America is a case in point. Here is a country torn apart ideologically with no middle ground in sight. The result is constant friction and perennial conflict.

Tomorrow night we have Mrs Hillary Rodham Clinton to put this all in perspective–there's no better person than her as she has seen and participated in American politics for over four decades, up close and personal.

India too has become a far more divided society. It has seen the rise of identity politics whether of caste or religion or even region.

India is a pluralistic society and that is being undermined.

Minorities feel threatened. Even Hindus are now being questioned about what kind of Hindus they are.

Soon India's democratic credentials will be severely tested with the Babri Masjid verdict.

The Fourth Paradox is that despite rising prosperity the Great Divide persists.

While countries have become more prosperous with economic growth spurred by globalisation and innovation, the rich have got richer and the poor poorer.

Inequalities have grown across the world and India is one of the countries where inequality is the highest.

With widespread farmer distress and pervasive joblessness, this is a time bomb ticking in our backyard. And the alienated will only be enraged further when they see banks being looted by the rich with immunity.

Prime Minister Narendra Modi has understood this well. Many of the schemes launched by him are targeting this paradox.

The challenge is to have equity with growth while not punishing the wealth creators.

Yet the oft repeated question in India – 'are we heading for a demographic disaster or are we going to reap a demographic dividend?' still hangs in the balance. You'll hear much about this and about banks in this Conclave.

The fifth and final paradox is the rise of the Global Digital Giants–they have great power but no accountability. They changed our lives for the better but at a cost. Privacy is a thing of the past. They know everything about us and are free to use it any way they want.

Their empires know no borders as they conquer the human mind across the world.

There are the new gatekeepers to the flow of information, interaction, and entertainment. The big four–Google, Facebook, Amazon and Apple are together valued at almost $ 3 trillion. That's as much as the Indian economy.

Social media too is a double edged sword. It can be used for evil or good. It gives everyone the freedom to express an opinion but that freedom is threatened as organisations use troll armies to denigrate those who disagree with them.

But it also allows for greater social activism, with the #MeToo and #TimesUp movements exposing those who wear the cloak of civility for the barbarians they actually are.

The other irony is that, with Google, we live in a time when the world's knowledge is at our fingertips and the truth is easily verifiable. But the truth is constantly on trial.

Fake news is a virus that has infected the digital ecosystem. And there is no cure in sight.

Regulating these tech giants will be a big challenge in the years to come.

Ladies and Gentlemen, I believe these paradoxes that I have spoken about will be the key issues that will dominate the 21st century.

Conversations on all such issues and more–this is what the conclave is all about.

On that note, let me welcome you again to our annual festival of ideas.

This is where we debate, discuss, argue and learn.

I believe learning till your last breath is a life well lived.

Let this Conclave be part of your learning.