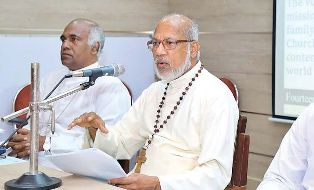 “When there are conflicting claims from various communities on such issues, society should discuss it and come to an amicable settlement,” the cardinal said when journalists asked for his comments on the growing instances of intolerance in India related to food habits of people.

The prelate addressed a press conference in Kochi on October 27, soon after his return from the Synod on Family in Rome. The same day saw the Delhi police raiding Kerala House in the national capital after they received a complaint that its canteen was serving beef.

The raid evoked widespread condemnation from across the country forcing Prime Minister Narendra Modi to seek an explanation from the federal home ministry.

He said if society cannot reach an amicable solution on contentious issues through discussions, the courts must decide on the matter.

The country has more serious issues to discuss than what people eat and controversies over beef-eating should not be blown out of proportion or sensationalized to create pressure on society, the cardinal asserted.

Every community can assert its claims. The larger society will decide whether the claims are acceptable or the courts of law should intervene, he added.

Referring to the Synod in Rome, the cardinal said the assembly of bishops has decided to make the Church more compassionate about people who do not follow the Catholic norms on families.

“The church till now has talked in a voice of authority but from now onwards, its voice will reflect the grace of God,” he said.

He said his Syro Malabar Church will soon start work on issuing fresh guidelines for the parish priests and counseling centers which are dealing with issues concerning families.

Instead of sitting on judgment of the lives of remarried divorcees, people who are in live-in relationships and same-sex marriages, the Church will try and understand such situations.

“The Church believes that they are products of societal changes does not blame individuals for them,” the cardinal said. They also will have a place in the scheme of things of the church, he said. The church will design new pastoral means to address such issues, he said.

Those involved in the pastoral care of the Church members should adopt a more humane and kind approach to people facing problems, said the cardinal describing the general tone of the discussions at the Synod.

The church hierarchy will speak the language of power and not of authority, he said about the Pope’s and the synod’s desire to adopt a more inclusive policy when it came to issues such as divorces and homo sexuality.