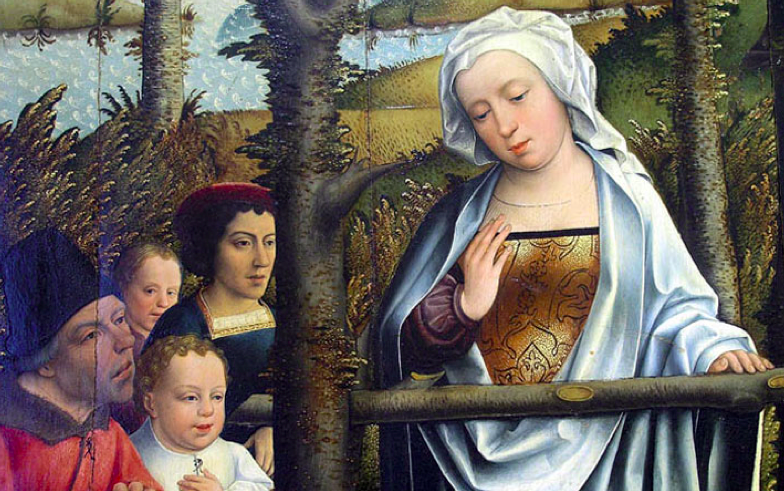 (Note: This story was forwarded by Arul Louis, a very smart journalism student of this scribe in New Leader times long ago. He is now much smarter than his mentor as a journalist in NY. Hear-say sinners (Magdalenes) are now called celebrated Saints. That is the kind of topsy-turvy world we are living in. Don’t forget how the Synod Fathers  were describing themselves: “Holy, Catholic, Apostolic, ‘Sancti peccatores = Holy sinners”. It doesn’t matter how we are called — sinners or saints – what we really are is what counts. Prodigal or prostitute, we are God’s children. Before Him there is none of these man-made distinctions. Let more Maray Magdalenes be introduced on to the pews and from pews to the altar to send scare waves to the conservatives to get out of the church on their own.

Later we shall go out and welcome them in saying: “We don’t bite.” Francis is reported  to have said that to the cardinals who stayed out, when Francis rushed into the Lift: “Come in, there is space, I won’t bite.” That is the kind of   family spirit, equality and camaraderie Francis wants to see practiced in the Church. Let us try and do it. james kottoor, editor)

One of the spots on the map where Pope Francis' decision to elevate the celebration of St. Mary Magdalene to a major feast has been received with greatest enthusiasm is India, where she's known locally as a “shishya,” a term from India’s Vedic tradition that means “student” or “follower.”

A recent decision by Pope Francis to elevate the Catholic Church’s annual commemoration of Mary Magdalene into a “major feast,” putting her on a liturgical par with the male apostles, has drawn wide reaction around the world, with some hailing it as a major step forward and others wondering if it’s hollow symbolism.

One of the spots on the map where the move has been received with the greatest enthusiasm is India, where Mary Magdalene is known locally as a “shishya,” a term from India’s Vedic tradition that means “student” or “follower.”

The National Coordinator of the Association of Franciscan Families of India, Father Nithiya Sagayam, who’s also served on Justice and Peace commissions of both the Indian and the Asian bishops’ conferences, welcomed the elevation of Mary Magdalene.

He argues that it showcases the lost sheep and the sinners who turn back to God, adding, “This is an excellent way of presenting a Church which is people-centred.”Sagayam went on to praise the step as great news for a Church expected to be more “gender-sensitive and focused on equality.” He noted humorously that as much as the Church is seen as dominated by men, there seem to be a dearth of them in the pews.

He sees the elevation of Mary Magdalene as a great gesture in that it’s a special recognition to all women in the Church, who, he said, contribute effectively for the mission of evangelization through their lives and ministries.“While the elevation of the day of Mary Magdalene from memorial to feast is a welcome sign, we need to focus on the socio-pastoral situation of women in the Church, at the local level in the diocese and in the parishes and base communities,” Sagayam said.

Sister Julie George of the Congregation of Missionary Sisters Servants of the Holy Spirit agreed “it’s a big step for women,” but warned, “we cannot stop with that.” “We have to do much more than that, so women could be in decision-making positions and part of decision-making bodies in the Church,” she said.

George, who is also a lawyer for women’s rights and director of Streevani, a women’s empowerment organization, reminded people that “the pope has given an instruction that women’s feet could be washed on Holy Thursday, but while many priests followed the decree, there were also many priests who outright refused to do so.”

For some, such as John Dayal, a noted writer, activist and former President of the All India Catholic Union, the elevation of St. Mary Magdalene is a blessed day long in coming.Dayal told Crux that “the Holy See making Saint Mary Magdalene a liturgical feast, which has been long anticipated but finally decreed in the time of this wonderful Francis, our pope, possibly has a more significant consonance with the people of the Orient.”

Contemporary Asians, Dayal said, often feel a special empathy for women “as they struggle with the innate patriarchy of religious, social and political systems.” A spokesperson for the Prem Jyot Ashram, run by the Discalced Carmelites of Baroda, said, “We feel delighted and proud that the Holy Father is able to perceive the wonderful gifts that are the legacy of every woman.”

The fascination with Mary Magdalene in India has deep roots. In Kerala, the country’s Catholic stronghold in the south, local tradition holds that St. Francis Xavier, the famed Jesuit missionary, personally built a small church consecrated to Mary Magdalene in 1544, a simple thatched shed with walls of dried coconut leaves.

While a more permanent structure was being built in the early 20thcentury, fisherman spotted a statue of Mary Magdalene that washed up on a beach, which was eventually consecrated and placed in the church.

In the Ahmadiyya tradition of Islam, founded in British-dominated India in the 19th century, Jesus is believed to have been married to Mary Magdalene, to have travelled to India, and to have died and been buried in the country’s Kashmir region.