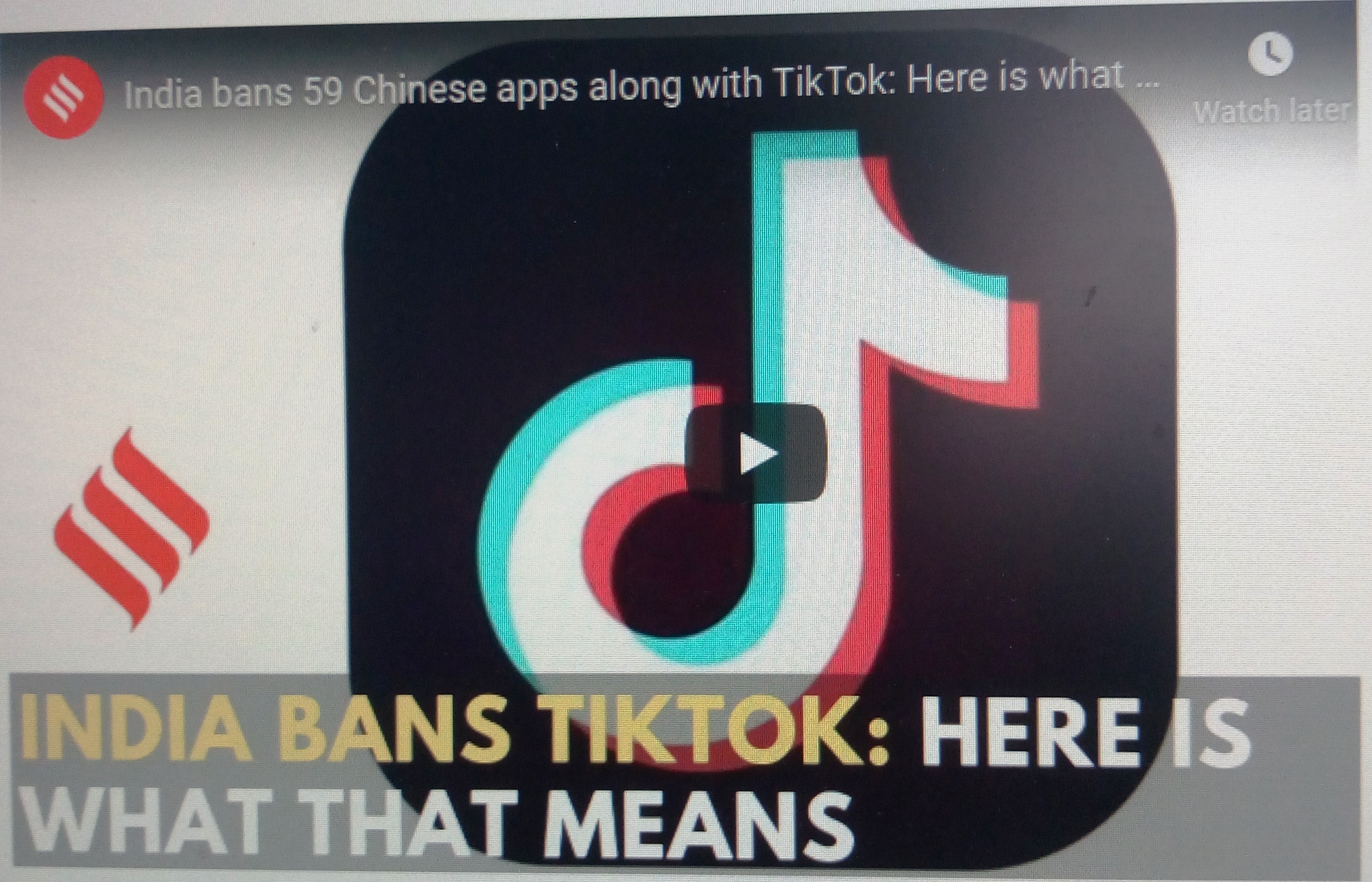 On Monday 29th June 2020 the government of India  banned 59 apps originating from China, including very popular ones like the short video platform TikTok, UC Browser, file sharing app ShareIt, and CamScanner, which allows iOS and Android devices to be used as image and document scanners. The ban has been enforced under Section 69A of the Information Technology Act, 2000 (“Power to issue directions for blocking for public access of any information through any computer resource”): “Where the Central Government or any of its officers specially authorised by it… is satisfied that it is necessary or expedient so to do, in the interest of sovereignty and integrity of India, defence of India, security of the State, friendly relations with foreign States or public order or for preventing incitement to the commission of any cognizable offence relating to above, it may… by order, direct any agency of the Government or intermediary to block for access by the public or cause to be blocked for access by the public any information generated, transmitted, received, stored or hosted in any computer resource.”

The Ministry of Information and Technology has said that it “has received many complaints from various sources including several reports about misuse of some mobile apps… for stealing and surreptitiously transmitting users’ data in an unauthorised manner to servers which have locations outside India”. Since this “ultimately impinges upon the sovereignty and integrity of India, is a matter of very deep and immediate concern which requires emergency measures”, it has said.

Chinese law requires companies of Chinese origin to share data with that country’s intelligence agencies, irrespective of where they operate. The government has already asked Google and Apple to remove the apps from their stores for users in India, and will issue similar instructions to Internet Service Providers (ISPs) such as Jio, Airtel, and Vodafone, sources said.​ A joint-secretary level panel comprising officials from the ministries of IT, Telecom, Law and Home Affairs, may also issue a show-cause notice to these apps and ask them to place on record the number of times Chinese agencies have asked for data and whether they complied with such requests. Details regarding the nature of data sought by Chinese authorities and the frequency is also likely to be sought, sources said.

This is an area where the so-called-invincible army of the PLA is helpless. Even eyeball-to-eyeball glare will not help. India's bold stance could be a model for other countries to follow, including a new alignment of world powers, for example Quadrilateral Alliance (QUAD) among Australia,India, Japan and USA.     Isaac Gomes, Associate Editor, Church Citizens' Voice

China over the past decade built an alternate online reality where Google and Facebook barely exist. Now its own largest tech corporations from Alibaba Group Holding to Tencent Holdings are getting a taste of what a shutout feels like.

The unprecedented decision to ban 59 of China´s largest apps is a warning to the country´s tech giants, who for years thrived behind a government imposed Great Firewall that kept out many of America´s best known internet names.

If India finds a way to carry out that threat, it may present a model for other countries from Europe to Southeast Asia that seek to curtail the pervasiveness of apps like Byte Dance´s TikTok while safeguarding their citizens´ enormously valuable data.

TikTok had signed up 200 million users there, Xiaomi is the No. 1 smartphone brand, and Alibaba and Tencent have aggressively pushed their services.

But India´s policy jeopardises all those successes, and could have wider geopolitical consequences as the US seeks to rally countries to stop using Huawei Technologies for 5G networks.

With China´s tech companies poised to become some of the most dominant in emerging industries like artificial intelligence, India´s actions may spur countries around the world to weigh the extent to which they let China gain user data and potentially economic leverage in future disputes.

Chinese internet firms have struggled to replicate their online services beyond their home turf, even before Washington lawmakers began raising concerns about the wisdom of allowing the Asian country´s corporations like ByteDance to hoover up valuable personal data.

India amplified those concerns by accusing apps including TikTok, Tencent´s WeChat, Alibaba´s UC Web and Baidu´s map and translation services of threatening its sovereignty and security.

India´s prohibition provides further evidence that nations are using tech for to assert themselves geopolitically, following the Trump administration´s worldwide campaign to contain China and national champions like Huawei.

That depends in part on how much Prime Minister Narendra Modi´s actions are motivated by domestic interests following the worst military clash between India and China in almost half a century. “Beijing should certainly worry that the impact of the deadly clash could push India toward the US,” said Zhang Baohui, director of the Centre for Asian Pacific Studies at Lingnan University.

“But these recent economic measures by India may not by themselves concern Beijing too much as it understands that Modi´s government, facing rising domestic nationalism, has to do something to soothe the public sentiments and retain legitimacy.” It remains unclear how India will enforce its decision, given TikTok for one has already been downloaded by roughly one in six people.

But it follows a series of steps to curb China´s presence in the country, demonstrating the administration´s hardened resolve since long simmering tensions boiled over after a deadly border clash that killed 20 Indian soldiers.

The country´s government procurement website has barred purchases of Chinese made goods.

Authorities have asked the largest ecommerce firms, including Amazon.com and Flipkart, to start showing “country of origin” on goods sold.

And India is said to be dragging its heels on clearing goods imported from China, stranding electronics at ports.

“The government thinks about governing the internet in a very similar way to China, which is blanket bans, asserting national boundaries on the internet and essentially carving out what would eventually become a version of the Indian Great Firewall,” said Dev Lewis ,a research fellow at Digital Asia Hub in Shanghai.

“Everyone´s struggling to deal with governing technology companies and apps, especially ones that cross borders.

So when India takes a step like this, it sets a precedent for the things that you can do.” In terms of the immediate business consequences, ByteDance could be hardest hit.

India is its biggest market with more than 200 million TikTok users.

During a brief ban last year, the Chinese company estimated it was missing out on half a million dollars a day of revenue.

In a statement posted to Twitter, TikTok India head Nikhil Gandhi said the company complies with all data privacy and security requirements under Indian law and has not shared any user information with any foreign government, including Beijing.

India´s prohibition could also give American companies a possible edge over Chinese players in a rare global tech market that is both populous and not yet saturated.

While WeChat never made it big in India, banning it may help shore up Facebook Inc.´s WhatsApp.

“The Indian government has a responsibility to uphold the legitimate and legal rights of the international investors including Chinese ones,” he said. But for now, China doesn´t have many great options to retaliate.

“While Beijing is highly adept at economic coercion, in this case it has somewhat limited options to act in a reciprocal manner,” analysts for the Eurasia Group wrote in a research note. “Bilateral trade is heavily weighted toward Chinese exports to India. Attempts to hurt India economically could blowback on Chinese companies.”