Imitate Jesus sleeping on the DECK! 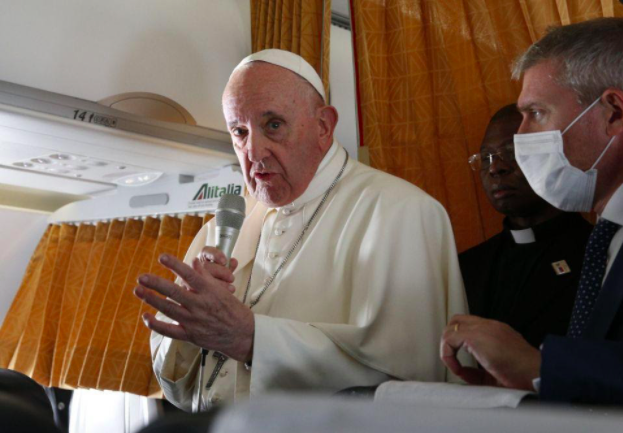 Christopher White is the Vatican correspondent for NCR. His email address is articwhite@ncronline.org. His article in NCR (National Catholic Reporter, USA) is very timely & relevant to the raging/fierce /prolonged  controversy surrounding Palai(My original diocese) bishop’s views on “Love Jihad & Narcotic Jihad”. I had the opportunity to visit their office in Kansas city while studying Journalism at Marquette U.,in 1950ies  and working in 3 papers, after degree.

All the bite and fury, thunder & lightning surrounding this tempest in a teacup may vanish into thin air if only we recall three statements of the universally acclaimed Pope: “Prosolatyzation is a solomn Nonsense!”, “All religions are willed by God” & “Our God is not a Catholic God!” Where then is place for present debate and scoring points, and that among the so-called Intelligentia. To them my curt answer is: “Intelligenti Pauca!”(few curt words to the brainy!)  already said!

Weather in politics or religion, we all like others to join our organized religion or politics, but not by hook or crook, but by fair and just ones! As for me, I am not a card carrying member of any of them, I used to be in my younger days of Syromalabar, which now has become “ZORO” under my very close friend Cardinal Alalanchery! I have already written too much on these topics in WCV/(CCV) to need any repeat!

Imitate JESUS sleeping on the deck!

When the anti-prolife conservative US bishops roared against Biden, they waited with bated breath to get some tip  against him from the Pope, but he said nothing against Biden. When the President of his home country and his  “keep” came to Vatican he arranged a special Mass for them and gave Communion to both. As Pope it is not his role to look into the bed rooms of his honored guests!

Let the Kerala Bishops and Politicians rave or rant as in a stormy sea! Just imitate Jesus sleeping soundly on the deck only to tell them, when they are worn out: YOU MEN OF LITTLE FAITH! And they pretend to be preachers of FAITH! Not in any case in a SACHIDANANDA (Sat+Chit+Ananda) james kottoor, editor WCV.

This article appears in the Pope Francis in Hungary and Slovakia feature series. the full series.

ABOARD THE PAPAL FLIGHT FROM BRATISLAVA — Pope Francis on Sept. 15 said the question of whether pro-choice Catholic politicians should receive Communion is "pastoral" and warned against bishops and priests who wade into politics.

Francis said he did not want to specifically address the particular situation in the United States, but added that "if we look at the history of the church, we will see that every time the bishops did not act as shepherds" it was a "problem."

Although the pope identified no politician by name, his remarks come at a time when the U.S. Catholic bishops are very publicly divided over Joe Biden, the nation's second Catholic president. Biden's support for legal abortion has led to calls by a number of conservative bishops for him and other pro-choice Catholic politicians, including Speaker of the House Nancy Pelosi, to be denied Communion.

On the papal flight, Francis also reiterated his opposition to abortion, saying "abortion is homicide." "Scientifically, it is a human life," the pope regarding the status of an embryo.

Francis was asked whether he had ever denied the Eucharist to someone who presented themselves for Communion and he said "never."

He went on to share a humorous anecdote of celebrating Mass on one occasion at a nursing home. Afterwards, an elderly woman thanked him for Communion, adding that she was Jewish.

"Those who are not in the community cannot take Communion, like this Hebrew lady," he said, "but the Lord wanted to reward her, and I did not know it."The reception of Communion, said Francis, is "linked to the community."

While there may be those that are "temporarily" outside of the church community, he said they are "are sons of God and they need our closeness, our pastoral closeness." "A shepherd can decide it with the style of God," he added.

"If you are tender as a person, this is just a theory, but being pastors, the pastors know how to act in every moment." Francis also recalled the "storm" surrounding Communion for divorced and remarried Catholics following the release of his 2016 apostolic exhortation Amoris Laetitia. The document offered a cautious opening to Communion for some divorced and remarried couples and the pope recalled that he was accused of "heresy" by some critics at the time.

He said that one must distinguish between theological questions and pastoral ones, saying that: "As a pastor, you have to be a neighbor, and if you get out of this pastoral care of the church, you become a politician."

Before a meeting of the U.S. bishops in June, the Vatican had sought to intervene in the debate about Communion for Catholic politicians. The Congregation for the Doctrine of the Faith sent a letter to the bishops urging "extensive and serene dialogue" before moving ahead on drafting a planned document on "eucharistic coherence."

The Vatican called on the body to engage a process of consultation among the bishops themselves, with Catholic politicians who disagree on matters of church teaching and with other episcopal conferences.

Instead, at the meeting, the bishops voted to advance plans for a document on "eucharistic coherence," which they are slated to vote on this November.Before leaving on his trip, Francis met on Sept. 6 with Archbishop Christophe Pierre, the Vatican's ambassador to the U.S. Pierre has urged the bishops to find a path forward together in unity, rather than their current fractured approach to the issue.

The pope confirmed reports that the two men did not discuss migration, an issue where the two leaders are at significant odds and where, during his brief 7-hour stay in Hungary, Francis offered an implicit rebuke of political strongmen and pleaded for the majority Christian nation to become more open and welcoming.

Instead, Francis said the meeting began with a discussion of ecology and also the need to promote family, specifically saying he asked Orban about the average age in Hungary.

Francis said he is "worried about the demographic winter" in Europe and lamented that there are "so many empty villages or with a dozen of old people." The pope said he was pleased to hear that Hungary has national policies supporting young people that are married and have children.

The pope also repeated the church's teaching that marriage is a sacrament between a man and woman, but added that countries have the ability to grant gay couples "security" and "stability" through civil law.

Francis also used the occasion to double-down on his campaign for the COVID-19 vaccine, saying that "humanity has a history of friendship with vaccines," in response to a question of how to respond to vaccine skeptics.

While he has emerged as one of the loudest leaders on the world stage to encourage vaccinations, Francis acknowledged that even among the world's Catholic cardinals there are vaccine skeptics, one of whom recently just recovered from the coronavirus.

The pope labeled it an "irony of life" — a possible reference to U.S. Cardinal Raymond Burke, a noted vaccine skeptic who was for a time in critical condition on a ventilator after testing positive for the virus in August.

During his March trip to Iraq — his first after 15 months of foregoing international travel due to the global COVID-19 pandemic — the pope admitted he felt "much more tired" than on past journeys. But despite recently recovering from a ten-day hospitalization in July, the pope kept up a breakneck speed on the trip, celebrating three public masses and delivering ten public speeches.