Iftar Parties: How Politics Takes Over Religion, How Some Ministers Turn To Hypocrisy 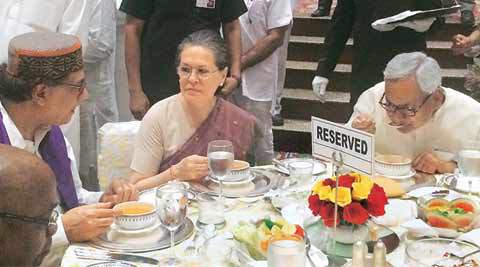 (The lesson driven home is this: In today's world the way to success whether in politics or religion is hypocrisy. It is against this Jesus roared like a lion and TJS George does it now. We see it done when Christians end their fast by eating like a glutton as though to make up for what they gave up during lent. The worst thing is using religion to gain political mileage, putting on a façade of piety at political functions to win over people of different faiths. The truly religious must rein in this tendency. james kottoor, editor)

In no democracy is religion as politicised as in India. And no other religious event in India is as

politicised as Iftar. The breaking-fast ritual signalling the end of the daily Ramadan fast is traditionally an occasion for piety and family gathering. While that tradition remains strong among the faithful, commercial interests and politicians seem to work against the spirit of the occasion. Some promote the feasting rather than the fasting. Others host Iftar parties to show off their presumed influence among Muslims.

Is influence purchasable with samosas? Delhi was abuzz for days with speculation over who would attend and not attend Sonia Gandhi’s Iftar feast. Lalu Prasad’s announcement that he would not attend was seen as a major political statement. Rival Nitish Kumar’s decision to attend added a sharp edge to that statement. Sonia, Lalu, Nitish—what have they got to do with Ramadan and Iftar? How can they overshadow the purport of a religious occasion of prayer and piety that is alien to them? A year ago, Sonia Gandhi’s Iftar party was a flop because the Congress had just been ignominiously beaten by the voters; no one of any importance bothered to respond to her invitation. Not this time. If the hall in Ashoka Hotel was not even half full last year, it was overflowing this time. More important: No one seemed interested in the roasted sea-fish, the biryanis and the distinctive kebabs on offer; they just wanted to crowd around Sonia and Rahul and get selfies.

Weather-watchers quickly drew the conclusion that the BJP was losing ground and the Congress was gaining. Maybe. But what has that got to do with the submission to God and the charity that Iftar enjoins upon the faithful? It is not just our desi netas who exploit the religious occasion for political ends. Pakistan does it with gusto. Last year, the Pakistan High Commissioner’s invitation to the separatist Hurriyat leaders in Kashmir had led to India cancelling the scheduled meeting between the foreign secretaries of the two countries. Undaunted, the High Commissioner seemed to dare India when he invited the separatists to the Id celebrations this time too. He rubbed it in by saying that Pakistan would fully support the Kashmiri people’s struggle for self-rule.

Pakistan’s very existence is in the name of Islam, but its conduct puts politics over religion. Who can blame them when the RSS itself is making use of Iftar parties? Its special-purpose vehicle, the Muslim Rashtriya Manch, held a rather modest Iftar in Lucknow. Modest because the eats were limited and offered in small paper plates. On the wall of the stage, though, there were slogans that spoke for themselves: “Education, Etiquette, Development” said one. Another said: “We were one from nationhood, culture and ancestry, and we will remain one.” The function, the organisers emphasised, was “spiritual, not politics”. As non-Muslim politicians rush to win the approval of Muslims for electoral purposes, there is a one-sidedness that stands out. People who crowded around Rahul Gandhi offered him skullcaps to wear. Mulayam Singh wore a prominent white cap and also an Arab scarf. Leaders compete among themselves to put on Islamic symbols to show their identification with Muslims, however superficial it may be. But the compliment is never returned.

Muslim leaders do not put on symbols of others even for a celebratory show. (Narendra Modi was the only leader who had the courage to decline a skullcap offered to him by a cleric in 2011.) Politicians who put on skullcaps for Iftar often ditch Muslims in practice. The good news is that some Muslim clerics and scholars have started criticising the politicisation of Iftar. Maulana Ikramul Haq, an Imam, actually issued a diktat saying that it would be un-Islamic to attend such parties. Paying heed to such advice will help re-emphasise Ramadan’s message of purity. Simultaneously, they must discourage the misplaced overzealousness of some Muslim politicians who pretend to be more Islamic than others. The commissar of Kerala’s Muslim League, P K Kunhalikutty, once declined to light a lamp at a public function saying that it was un-Islamic. This is a man who is linked with several scandals of a distinctly un-Islamic character. Keeping up with his leader, the state’s failed education minister, a League functionary, recently refused to light a lamp. He was chastised, right on the stage, by filmstar Mammootty, a practising Muslim, who decried the Muslim League’s outdated policies. It is a pity that good Muslims merely become popular heroes while hypocritical Muslims become ministers.