I want to do something for society 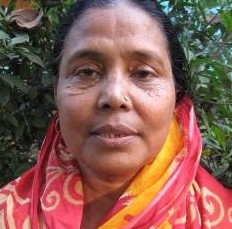 What she cherishes the most is donating blood.

She was the first woman in her village to donate blood. That set a new trend in Pailan, a village some 40 km southeast of Kolkata. As others followed her example, the village now has a steady bank of female blood donors.

“I was the first woman in my village to donate blood. This became an example for the others,” said the woman associated with Child in Need Institute, Pailan

The 48 year-old woman is a volunteer with SAHAY (Social Action for Helping All Youth), an affiliated NGO of US- based Children International (CI)CI, that runs a sponsorship program in eight districts of West Bengal, including Kolkata, serving 26,000 children and youth.

Being an active volunteer along with being a full time home maker, is no mean feat. Who can better state this than Mehtab Begum? She looks after her home, cooks, sews, washes. Mehtab has taken her responsibilities as a volunteer a step further as she has become a member of her Gram Panchayat (village council), a member of the local self-help women’s group, ‘Alor Disha’ and a committee member of Khariberia Free Primary School, of her locality.

Mehtab came into contact with SAHAY as her children were sponsored students under the CI program. Impressed with the NGO’s work, she expressed her desire to ‘do something for the community’ and ‘give back’. Since she could afford to give in materialistic ways, she decided to give her time and efforts. That was several years ago.

Today, both her children have graduated from the program. While her husband and son run a small family business, her older daughter has been married.

How does she feel about children and working with them and for them? Mehtab says, “There have been fun times too during my childhood. I remember a distinct incident from my childhood days. My uncle owned a bakery and every year in December, different types of cakes would be baked. My friends and I would sneak into the bakery, hide there and quietly eat a lot of cakes”.

“Unfortunately” regrets Mehtab, “that bakery is no more and I do not get to see so many varieties of cakes. Yet every December, when the air is filled with the smell of cakes, I recall those days of my childhood.”

Mehtab lost her father at the age of twenty and her elder brother took over the responsibilities of the house and her upbringing.

Unfortunately, the brother died of heart attack six years ago. She states, “This incident made me very weak and I got depressed. I can never forget the incident throughout my life.”

That was the time SAHAY volunteers met her and changed her life.

As a volunteer some her duties included keeping a track of sponsored children of the program and their activities. She also monitors the attendance of school going children, conducts meetings with parents and guardians, helps in the organization of events among others.

She has the foresight and immense maturity of a true leader, her superiors say.

What have been the most inspiring incidents of her volunteer life? Mehtab says, “There are many centers in a gram panchayat for different activities. I was an in-charge of one of the centers. Because of our team hard work, our centre was recognized as the ideal one in the Gram Panchayat. The then Chief Minister of Punjab, Zail Singh paid a visit to our center to observe our workings and carry the learning back to his state!”

Apart from the sponsorship program Mehtab has also reached out to others. She recalls an incident where she helped a young mother get back her child under dramatic circumstances. The husband had separated from her and had taken away the child. He would not allow the mother to meet or see the child. Mehtab accompanied by a few other mother volunteers went to their village, attended the panchayat meeting and took custody of the child as decided by the elders of the community.

Whilst they were returning, the father of the child rushed in with some goons to claim the child back. It was then that women took to their heels. To make matters worse their auto was stuck in the mud, so they literally carried the vehicle and turned it in the opposite direction and drove away. Just saved by the teeth of their skins!

What is her ultimate wish? Mehtab seeks that other mothers also come forward and assist in the development and growth of their village and community.

“We get everything from the world, but what do we give back? I want to do something, not only for my own family, but for society at large.”