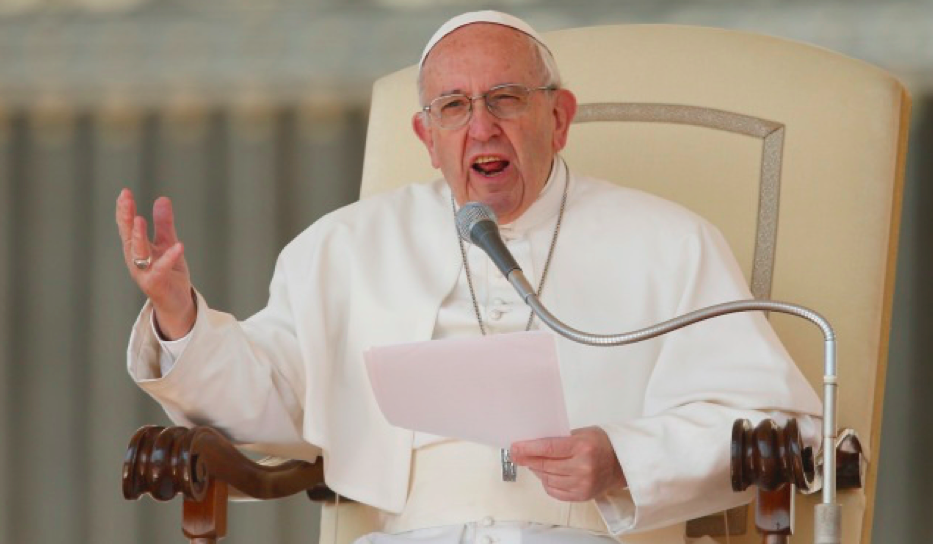 In the pic: Pope Francis speaks during his general audience in St. Peter's Square at the Vatican April 5. (Credit: CNS/Paul Haring.)

Who are the hypocrites? They are those who speak gently to deceive and act brutally to kill, says the Pope. For Jesus they were the high priests and Pharisees of his times. To this band of Catholic priestly class of today we can easily add the politicians  and sharks in the market of business competition. They are all sweet with words and bitter with deeds. Just watch our politicians, from the PM at the top to the MLAs and their minions at the bottom.

“From their fruits you shall know them.” (Ex fructibus cognoscetis) Jesus told us speaking of  trees. Even so, do not simply believe what our so-called leaders — weather religious or political — tell us using the language of  flattery and publicity. Instead look at their deeds and judge them. The essence of publicity is exaggeration and the reasoning is: “Just throw mud repeatedly, a hundred times, at a white wall, something is sure to stick”.

Don’t you experience it daily when you see your favorite serials  and end up buying at least some of the stupid  items repeatedly advertised? The more worthless an item the more repeatedly it will be advertised. So doubly make sure never to buy that item. The opposite principle is: “Quality control and no customer hunting!” Excell in quality and it will draw people to itself.

ROME – The diabolical language of hypocrisy, which ensnares others through flattery, has the power to destroy Christian communities, Pope Francis said.

Like the Pharisees who spoke to Jesus with soothing words of adulation, Christians who engage in hypocrisy speak gently yet “brutally judge a person,” the pope said June 6 at his early morning Mass.

In his homily during the Mass in the chapel of the Domus Sanctae Marthae, the pope focused on the day’s Gospel reading from St. Mark, which recounts the Pharisees’ attempts to trick Jesus into answering a question on the legality of paying a census tax.

Their attempt to trap Jesus with flattery, the pope said, is the first sign of their hypocrisy. “Hypocrites always begin with adulation,” he explained. Adulation is “not saying a truth; it is exaggerating, it makes vanity grow.”

Jesus’ answer that they “repay to Caesar what belongs to Caesar,” the pope said, reveals that he can see beyond their duplicitous nature, and that he “responds to hypocrites and ideologues with reality.

“Let’s remember this: If it begins with adulation, it can only be answered with reality. ‘Do not come to me with these stories: This is the reality,'” he said. In the end, the pope added, hypocrisy is the devil’s way of speaking and the devil is the one who puts “forked tongues” into a community in order to destroy it.

Pope Francis asked Christians to pray so that they may “not fall into this vice of hypocrisy,” which applies the “makeup” of adulation to mask “bad intentions.” Christians, he said, should pray, “Lord, may I never be a hypocrite, may I know how to say the truth and if I cannot say it, to be quiet. But never, never a hypocrite.