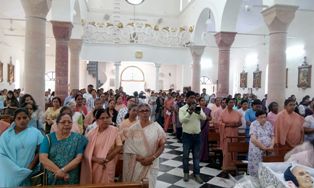 Sr. Bonaventure Morgan died of old age ailments on October 31 at Presentation Convent in Old Delhi where she had spent the past seven years in prayers. She was 98.

Archbishop Anil Couto of Delhi led the funeral Mass at St Mary’s Church adjacent to the convent, assisted by 14 priests on November 4, the feast of St Charles Borromeo.

The member of the Presentation of the Blessed Virgin Mary congregation, was fondly called as Bonnie, came to undivided India in 1946 as a missionary nun. Her initial posting was at Sargodha, a city in the Punjab province of Pakistan. She witnessed the last stages of India’s independence struggle that led to the partition of the country.

She came to the newly created India in 1952 as a teacher of Presentation Convent School in Old Delhi. Six years later, she was sent to teach in St Pius School in Goa, which was then struggling to free itself from Portuguese colonial rule. India liberated Goa through an army action in 1961, after 451 years under the Portuguese regime.

Archbishop Couto, in his homily, hailed Sr Morgan as a person of deep faith in God who committed totally to serve the poor and downtrodden mainly through education. The prelate also said the nonagenarian nun exuded joy that kindled hope and trust in others.

Sister Marie Therese, superior of the Presentation Convent in Old Delhi, in her introductory remarks before the Mass, said Sister Bonnie undertook and accomplished several ministries as a principal, superior and teacher during her 69 years in India.

She “created history by bringing about a change in the education system by amalgamating the two schools into one (Hindi and English Medium) and changing over from Senior Cambridge system of examination to Central Board of Secondary Education” at the Old Delhi school, Sister Therese added.

During her 69 years of missionary life, Sister Bonnie had also worked in Jammu, Srinagar and Goa. She returned to the Old Delhi School as a teacher in 1974 and two years later became its principal, a post she held for ten years.

After a year of Sabbatical in 1986, she went to Presentation Convent in Srinagar as a teacher of English and Music. She returned to Old Delhi in 2008 and spent the rest of her life in prayer ministry.

Sr Bonnie was born on August 8, 1918, as the fifth among 4 sisters and 4 brothers in Newry, County Down, Northern Ireland.

She was baptized as Brigid, the traditional Irish saint’s name. She grew up in her village, Kilcoo, attended her primary and secondary school in her home town. She pursued her college education and also graduated in music from Trinity College.

Sister Therese said her elderly companion used to credit her parents with her inspiration to join religious life. Her aunt, Sr. Alphonses, also a Presentation nun, was her role model. She entered the novitiate in 1939 in Virginia County, Cavan and took her vows on April 21, 1942 when Europe was caught in the World War 11.

She wanted to become a missionary but the war delayed her dream until 1946.

Sr. Bonaventure spent her initial years to get acclimatized to a new country, to its diverse culture, people and its extreme climate, Sister Therese noted.

Sr. Bonaventure had great love for the poor and the disadvantaged, the superior noted. The elderly nun was specialized in Mathematics. “She loved little children and was always very keen that they grew up as good responsible citizen of our country,” Sister Therese added.

She endeared herself to people by combining kindness and gentleness with great sense of humour and Irish wit. “Simplicity and humility were her hallmarks. Her laughter and smile were contagious,” Sister Therese added.