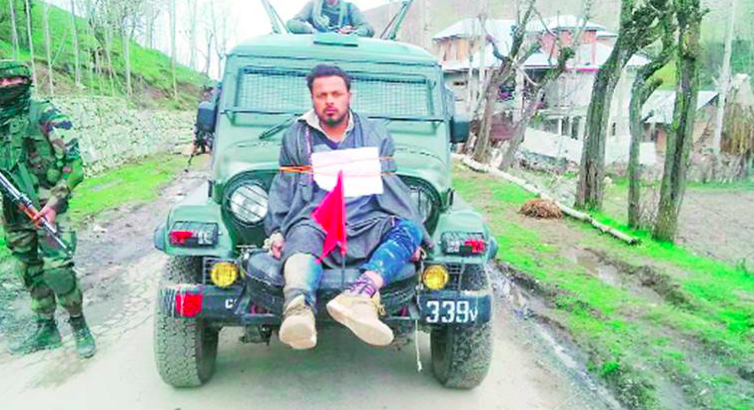 By supporting Major Gogoi, Captain Amarinder Singh and the army endorse displays of vengefulness. Farooq Ahmad Dar, the Kashmiri who was tied to the jeep as a human shield. (Source: Express photo).

(Note: The sight of Ahmad Dar, forced to sit like a sitting duck for any one to take a pot-shot makes a mimicry of human rights of civilians in India. Is the army to protect civilians or the civilians to protect the army? Under BJP government things seemed to have turned topsy-turvy!

Today when BJP completes (and LDF in Kerala  one year) 3 years of rule Malayalam papers like Manorama and Mathruboomi give wide coverage of the achievements of Modi as a person, not of Modi Sarkar or BJP government, in a two-page ad in Manorama and one page ad in Mathruboomi and says little about Pinarayi’s Kerala government.

Taking full note of it Pinaryi’s LDF daily ‘Deshabhimani” highlights the promises of Modi, not kept, like: 1. An end to attacks on Dalits and minority sections – attacks on the pretext of cow slaughter, desctrction of churches for alleged conversions; 2. Kashmir is boiling for the last one year instead of the peace promised; 3. India-Pak relations worsened 100 % instead of bringing Normandy; 4.Maoist attacks are on the increase; 5. National insecurity is all time high, worse than the times of Congress rule; 6. Instead of creating jobs too many Dalts are losing their livelihood jobs because of the closure of slaughter houses in all BJP rules states; 7.UP government cancelled the special quota given by Akhilesh government to Muslims; 8. Racial, caste and sex related violence is on all time high and most of the culprits are let lose; 9. What Modi promised was “Sab ka vikas, sab ka sat” but there was not Muslim or Christian candidate is among BJP’s 282 MPs in Lok Sabha nor did he give any ticket to a Muslim  in the last UP-election;

10. Demonitisation was brought in autocratically without consulting people and the promised time limit to get old notes changed till March end was reduced to December 2016 end; 11. Formed government in Goa and Manipur flouting democratic rules; 12. Created unrest in Educational field among students through privatisation  to help corporates to make money directly and indirectly for government; 13. Promised to create 5 crore jobs but last year Modi could give jobs only to 2.3 lakhs only; 14. Promised to give farmers half of cultivation cost and support price to buy or sell but nothing is done so far; 15. Farmers’ suicide is on steady increase. These are some of the failed promises listed by Desabhimani editorial today.

What is most appalling is the indirect curbs brought on the Press, the fourth estate, like making it difficult for fearless anchors and writers to continue their jobs and labeling any criticism of the government as anti-national or sedition. Success of failure of the 3 years of governing can’t be credited as the achievement of one Modi. It is due to the  joint venture of all in the government. We hope and pray that overprojection of just one man as the miracle leader may not end up as the rejected one by all in the next elections.

The litmus test of Modi, to start with, as an outstanding leader is going to be measured by the settlement of Kashmir issue to everyone’s satisfaction. Let him first pass that test first. james kottoor, editor)

The newly elected Chief Minister of Punjab, Amarinder Singh, writing in this paper (‘I applaud Major Gogoi’, IE, May 20) joined the debate about the well-publicised incident in which, on April 9, Farooq Ahmed Dar, a shawl weaver from Chil-Bras village in Budgam, Kashmir, was tied to the bonnet of a Rashtriya Rifles jeep and paraded around several villages, with a placard tied to his chest.

A former army captain himself, Singh argues that Major Leetul Gogoi, who ordered this action, should be awarded, not condemned, as his decision saved his soldiers.

Apart from a reference to “a stone-pelting mob” from which the soldiers needed protection, Singh provides few details, offering a general description of the army battling enemies at and within our borders. This obfuscation is deliberate, since we have full accounts of how Dar was captured, beaten up and exhibited, as a punitive, vindictive example of army power.

The use of locals as human shields is not new. Lt General Raj Singh Kadyan, who retired as vice chief of the army staff, has reportedly remarked that this is routine practice in the North-East: “When we used to move our military convoys… it was part of SOP (standard operating procedure) to always carry two or three locals with us, so that our convoy is not attacked.” Many Kashmiris have been subjected to this unnerving experience; several have written about being forced to walk ahead as soldiers enter areas which they consider dangerous.

As the internationally known photo-journalist Altaf Qadri reported, in 1996, the BSF, jittery after an attack on their interrogation centre at Srinagar’s Shiraz cinema, forced him to stand at the mouth of a street while they conducted operations there. The Kashmir Reader (August 21, 2016) reported Chief Minister Mehbooba Mufti, in an official speech on Independence Day, testifying to many years of this practice. This brutal, dehumanising violence against civilians has been routinised in our country — no one can argue though that it is not illegal under national and international law.

Dar’s brutalisation would have escaped notice, but for the video taken by a bystander. Later, Indian journalists emphasised the irony that Dar had voted just that morning; he was no stone-pelter, only a bystander who was picked up, beaten, taken to a CRPF camp, then handed over to the army.

But even if Dar had been — dare I say it — a stone-pelter, it would still not be acceptable to parade him through villages, with a loudspeaker announcing that all those who throw stones will meet the same fate. What might have begun as an officer’s decision to allow his soldiers and the election officials they were protecting to leave the area unscathed turned into a punitive display of army vengefulness: This is what we can and will do to you.

Had the soldiers felt threatened? Perhaps, but they were fully armed, legally entitled to fire in self-defence if necessary. Dar was driven around to make a larger point, directed at those Kashmiri civilians who dare express their disenchantment with the Indian state.

It is now routine to argue that since the army is battling Pakistani regulars and irregulars on our borders, the forces will be demoralised if we subject them to scrutiny. It is not enough that the army operates with virtual impunity under the Armed Forces (Special Powers) Act; to dare question their methods, even when manifestly illegal, is anti-national. Do not expect officers to be members of a “gentlemen’s army,” Singh writes, “officers must… adopt a more aggressive role vis-a-vis the enemy”. No distinction is to be made between Pakistani forces or Kashmiris; all must be subject to the same “tougher national policy for dealing with inimical forces”.

However, many high-ranking soldiers do not believe that the army has to contravene the law to perform its functions. Several former army commanders have made public their dismay at the damage done to the army’s image. The reserve army of fake-nationalist trolls went after them (a fine indication that the generals were doing something right). But senior officers are uncomfortable with vengeful actions against civilians — these actions are too close to the vigilantism that seems to have become our new national credo.

Why then would an ex-army officer, now CM of Punjab, advocate a medal for the major who made an ugly example of Dar? Is this simply a newly elected politician’s personal assertion, on a national stage? Given that Singh is a senior Congress member, any such assertion is surely part of a larger muscle-flexing political agenda, which seeks to reclaim supposedly nationalist ground now dominated by the Bharatiya Janta Party and its Hindutva allies. If that is the case, then Captain Singh and the Congress do their nation a disservice, for our future surely lies in insisting that democratic institutions, including the army, function according to constitutional norms.

The “iron fist” he advocates might be an arresting metaphor, but it translates into inhumane politics, in Kashmir and in India.

Postscript: How quickly consequential issues degenerate into farce and tragedy. On the one hand, Paresh Rawal, an MP, incited further violence against civilians by tweeting that Arundhati Roy should be treated as Farooq Ahmed Dar was. On the other, Major Gogoi has been awarded a military commendation. Rawal needs tutoring on his constitutional responsibilities and ways to curb his misogyny. But far worse is the army commendation, for it makes it clear that this army chief will act to confirm his earlier, entirely inappropriate, statement that civilian protestors will be treated like enemy combatants. There is no more sure way to confirm the resistance of many Kashmiris who will no longer be victimised.(The writer is A.M. Rosenthal Professor, Department of English, University of Pennsylvania)*