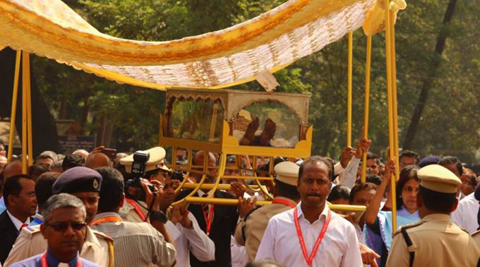 (In the picture: Procession of the relics of St. Francis Xavier in Old Goa outside Se Cathedral on his feast day, Dec. 3, 2014).

Panjim, India, Dec 5, 2014 / 12:03 am (CNA/EWTN News).- On Wednesday, the 462nd anniversary of his death, an estimated 200,000 people visited Se Cathedral in Old Goa to venerate the relics of St. Francis Xavier, the “Apostle to the Far East.”
The saint's relics are in the midst of an exposition, lasting from Nov. 22 until Jan. 4, 2015, which only happens once every ten years. The last exposition, in 2004, drew more than 2.5 million to Goa.
“There is a great spiritual awakening through catechesis, which is animating faith formation in the family and also fostering the building of small Christian communities,” explained Fr. Mario Saturnino Dias, director of the Archdiocese of Goa and Daman's missionary center.
“We are indebted to ‘Goencho Saib’ in receiving faith, vocations, and the Catholic Church,” Fr. Dias told CNA Dec. 3.
The residents of Goa, irrespective of religion, hold St. Francis Xavier in high esteem, calling him “Goencho Saib,” Konkani for “Sir” or “Lord.”

St. Francis Xavier was among the first companions of St. Ignatius of Loyola, and was one of the first members of the Society of Jesus. He evangelized in India, Indonesia, and Japan, and died in 1552 on his way to China.
His remains are normally kept at the Basilica of Bom Jesus in an elevated silver casket, but they were transferred to Se Cathedral on Nov. 22 for public veneration. Some 95-100,000 pilgrims were coming to Goa each day, but last weekend the number surged to over 200,000 daily, in anticipation of his feast. Some pilgrims have walked hundreds of miles on foot to visit the relics.
“People have identified St. Francis as a holy man of God who can intercede for them; they have witnessed several grace and miracles,” Fr. Dias said.
“The faith of the people is also seen in the popular devotions that are strengthened in the Eucharist. Thousands of faithful also queue for confessions.”
Fr. Dias emphasized the role of catechesis in promoting and refining popular piety, which the Goa-Daman archdiocese has taken up formation modules sent to the parishes.

During Mass on Dec. 3, Cardinal Oswald Gracias of Bombay called Francis Xavier “a holy man, a messenger of God.”
Cardinal Gracias' family has roots in Goa, and he noted that it is through St. Francis' teaching of the catechism, administering the sacraments, and forming Christian communities that his forefathers received the faith.
“Through him my ancestors received faith, and so today I am thanking God for this gift of faith.”
The prelate, explaining “the jewel of faith” received from St. Francis, asked the faithful “Are we keeping it shining? Is the Gospel the center of our life?”
Cardinal Gracias urged the families to maintain and continue the Goan traditions of family prayer and Bible reading.The Mass was concelebrated by Bishop Carlos de Pinho Moreira Azevedo, an official of the Pontifical Council for Culture; Bishop Jose Caires de Nobrega of Manajary, in Madagascar; Archbishop Blasco Collaco, apostolic nuncio emeritus to South Africa; and Bishop Anthony Fernandes Barreto of Sindhudurg, a suffragan diocese to Goa and Daman.
Archbishop Filipe Neri Antonio do Rosario Ferrao of Goa and Daman expressed his gratitude to the pilgrims and looked forward to the Jan. 4 canonization of Bl. Joseph Vaz by Pope Francis during his trip to Sri Lanka.
Bl. Joseph Vaz was a native of Goa who evangelized Sri Lanka in the 16th century and is known as the island's “apostle.”