Pope in dilemma: How to Clean up Augean Stables? 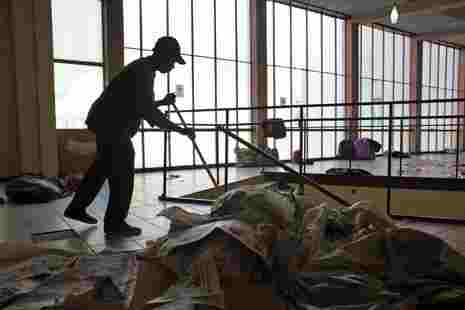 “Harvest indeed is great but laborers are few,” said Jesus long ago. Now it is a question of a mammoth house cleaning work in progress for Pope Francis. Stewards he appointed are turning out to be turn coats and cheats, fit only for prisons. Any honest trustworthy guys out there? Only people with impeccable quality, credentials need to apply!

It is over one year since Pop Francis  started out on a house cleaning operation at two levels: 1. First his own administrative offices in the Vatican. You have to lead by example, you have to become  the change you want to bring about –  so to drive  home the idea of a poor church and simple life style, he said good bye to a palatial life  of pomp and luxury, by living at St.Martha’s, a rented place and travelling in ordinary vehicles etc. 2. Second to get similar cleaning done in all episcopal headquarters around the world he exhorted them to introduce an inverted pyramid style of authority and administration (the whole Synodal speech of Oct.17th was about it) through two-fold dialogues – vertical and horizontal — in Church Citizens’ councils of clergy and laity  at diocesan and parish levels.

Here we focus a little on the first point only. To clean up his administrative offices he can’t be everywhere  in every room with a broom to sweep. He has to do it with a string of willing and honest deputies, collaborators, servants ready to serve like him right. But what happens if the one appointed as the store keeper himself/herself becomes a thief stealing from the store? This is the big question Pope Francis is  facing and what the latest Vattileaks highlights: (Qui custodiet ipse custodes?) Who will guard the guards themselves? If the fence starts eating the crop what are you going   to do? If the pastors – Cardinals, Archbishops, Bishops and priests —  start fleecing the sheep for profit or butchering them  to start or carry on their game  or pass time of  “flesh trade”(pun intended) how is he going to stop it?

We have heard of “Red light areas or streets” where sex trade is legalized. Of course, we have heard also people calling Rome the “whore of Babylon” but never realized they were referring to Vatican headquarters. But if we have to believe reports already published in www.Independent.co.uk, it is the first time we read explicit reports of “red-light establishments…seedy saunas and massage parlors where priests pay for sex…. Europa Multiclub, Europe’s biggest gay sauna. Tales of visiting priests were legion, and a section of the sauna’s website promoting special “bear nights” included a video of a hirsute man stripping down and changing into a priest’s outfit” according to latest Vatican leaks.

That brings us to the unmistakable  conclusion that the whole church — Cardinals, Bishops, Priests and Lay people — are fully involved in this sexy, financial scandal. Only we have to zero in now on the precise percentage of the involvement of the hierarchical church. Till recently these highly and heavenly placed celibate dignatories were fighting in the Synod about giving or denying communion  to divorced and remarried lay folks, the vast, sprawling sinful lot. So with good reason we can now call ourselves, the whole  Church, full of (“Sancti Peccattori”) Holy Sinners. We heard it said first in the 2014 session of the Extraordinary   Synod. Therefore imagine how correct was Pope Francis when he described himself   at the very outset of his pontificate as “I am a sinner”. He knew already what kind of people he was going to deal with constantly. And he did not want himself to be superior to them in  holiness, but equal to or below them to serve as Servant of sinful servants around him.

You have to put a thief to catch a thief, it is said. By hook or crook, by accident or providential design, God has placed a humble, holy person as the servant of servants in his Church today. By calling himself a “Sinner” to start his mission he has expressed his desire to all that he does not want to be addressed as “His Holiness.” Thus  Francis has  taught the whole church one unforgettable lesson, namely: “No one born of man and woman has any right to point an accusing finger at any one of his brothers or sisters.”  Such  “better than thou” self adverting  will always turnout finally as an instance of “pot calling the kettle black”. No wonder a person like Elton Johson described him as: “Miracle of humility in an era of vanity!”

How could the Synod fail so miserably?

Yet how is it that many of our  so-called  enlightened Synod Fathers have become so hard heartened and failed so  miserably  to grasp this central message of the Lord, first telling the crowd “Let the one without sin cast the first stone” and second to  the  woman caught in adultery: “I too don’t condemn you either. Go, sin no more”? Didn’t he also say: “I have come to save the sinners, not the saintly, the sick and wounded, not the healthy.” Did he not also present himself as the face of the prodigal father, the face of the good Samaritan nursing the victim of robbers? Again did he not tell the story of the unjust servant who got his debt of thousand bags of gold coins cancelled but would not write off a debt of 100 silver coins of his debtor, as an example of forgiving, not seven times, but seventy times seven?

In spite of all these towering, compelling, mind boggling  examples of mercy, compassion and forgiveness how could these “Worthies — Eminences and Excellencies” act the way  they did, like hard hearted, feeling less extortionists in refusing communion to divorced, or a gentle, welcoming word to lesbians? How could they have forgotten,  that a betraying Judas, a doubting Thomas and a denying Peter were at the last supper and they all received communion from Jesus? Is there any instance in the Gospels where Jesus refused to forgive any repentant sinner?

Nay, is there any sin in this  whole world which the Almighty cannot  or will not forgive? If the Church in this world is not to project the tender heart and loving face of a Prodigal heavenly Father, what on earth is the very purpose for its existence? Oh tempora! Oh mores! Oh the justice and morality of these so-called hard hearted, Holy People in the Catholic Church! The earlier we burry this and other divided, fighting churches, the better it is for the whole of humanity. That is why there is already a mass exodus from all churches, starting from the Catholic Church all over the world. What the world needs today is not a proliferation of churches but building up of a humane humanity beyond all churches and religions but taking inspiration from all.

Pope Francis has been speaking often these days about this humane humanity. Jesus himself presented to the world more as the Son of Man – 85 times as against 38 times as the son of God – in the Gospels. I have been advocating this idea for some forty years, also following the example of Sri Narayana Guru, since the very purpose of Jesus’ mission was to clean up the whole of humanity drowning in dirt and to  domesticate it, that is, to make it shed its wild animal instincts to follow the rule of the jungle: “Might is Right.”  So what is needed is a Jesus-like living to bring peoples of the world together as a family living in peace and harmony.

To conclude on the theme we started with, commenting on denying a civilized welcoming language to lesbians and gay people, some one commented: “It is like inviting someone to your house for a dinner party and telling him/her on arrival, please don’t eat anything from the laid out table.” So think gentlemen, think. You don’t have to be a Cardinal, a Catholic or a Christian; you have only to be a gentle man to know what you should tell your invited guests to your party. The whole universe is God’s party laid out for you. Cultivate, produce, share and care, take and eat and drink from the sweat of your brow. Do not rust out but wear out!