It’s all about honey and a lady 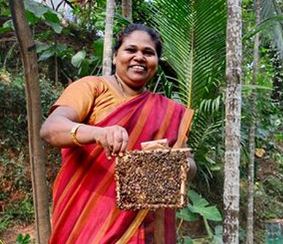 The story of Aleyamma, a house wife in Kasargodu disrict of Kerala, was elaborately written in the Sunday magazine of Indian express. In itself, this live story is quite motivating and inspiring – Editor

It is 9 p.m. Outside their house at Panathady in Kasaragod district in Kerala, Aleyamma and her husband Siby are hurriedly placing bee hives inside a van. Later, they climb in, and the van sets out towards the Coorg district in Karnataka, which is only 30 kms away. Once they reach there, they quickly place the hives, in 3 feet high stands, below trees, at a distance of three metres. “We have to do this before the sun comes up,” says Aleyamma. “Because, at sunbreak, the bees would want to come out in search of nectar and pollen. And if we keep the hives shut they will die of asphyxiation.”

Aleyamma is a breeder who practices migratory beekeeping. Once the honey is harvested at all the hives placed near her home, during the months of January to March, she moves off to Coorg and does bee farming there. “Somehow, the quality of the honey is far better,” she says.

But there is a reason for that. In Kerala, the major source of nectar is from the leaves of the rubber tree. “This is called unifloral honey,” says Dr. Stephen Devanesan, Principal Scientist, All India Coordinated Research Project on Honeybees and Pollinators, Kerala Agricultural University. “But in Coorg, the hives are placed in forests where there is diverse flora. So, the quality of this multi-floral honey is much better.”

However, the collection of honey is not an easy process. First the bees have to be warded off, using smoke. Then the honeycombs are removed from the hive. With the help of a honey extractor, the honey is taken out from the cells and stored in containers. All this has to happen in less than an hour, before the bees start stinging the person.

“In the beginning the stings used to pain a lot and there would be a swelling,” says Aleyamma. “But now, although we get pain, there is no swelling. This is my bread and butter, so I have learnt to tolerate the aches.”

The biggest problem with honey is that it crystallises and ferments. To avoid this, Aleyamma uses the double-boiling method. In this technique, she pours water into a large container. Then she places a smaller bowl, which contains honey, inside it, resting on three bricks. The bottom container is heated, so that the temperature inside the smaller bowl reaches 45 degrees centigrade. Then the honey is taken out, and put through a sieve, to get rid of wax particles, dust and pollen. Following this, it is reheated to 65 degrees centigrade for about 10 minutes. “After the honey cools, it is filtered,” says Aleyamma. “Once this is done, the honey will last for years, without going bad.”

Interestingly, Aleyamma is the only woman bee keeper in Kerala. Last year, she produced 40 tonnes, thanks to the 5000 colonies of Indian and Italian bees that she has.

And thanks to this high productivity, Aleyamma was recently awarded the Stephen Memorial Award for the best bee keeper of 2014 by the State Agriculture Minister KP Mohanan. This award has been instituted by the Federation of Indigenous Apiculturists.

To get a high productivity, Aleyamma depends a lot on the Tamil workers, who are experts at bee collection. “They are sincere, hard-working and not afraid of being stung,” she says.

Aleyamma also credits her success to a workshop which she attended. This was conducted by Devanesan, along with Dr. K. Prathapan, Director of the State Horticulture Mission. Says Devanesan: “I have imparted training to Aleyamma and other breeders on how to maintain the health of the bees, manage colonies, and do high-tech apiculture. Today, they are all doing well.”

Like most good things in life, Aleyamma came to bee-breeding by accident. When she got married and went to stay at her in-laws home in Thodupuzha, she saw bee hives for the first time in the backyard. In the mid-1990s, she and Siby decided to move to north Kerala to improve their economic prospects. They tried pepper farming and rubber cultivation. “It did not do well,” she says. “That was when I thought about bee farming. And now, here I am, the only woman in Kerala doing this work.”