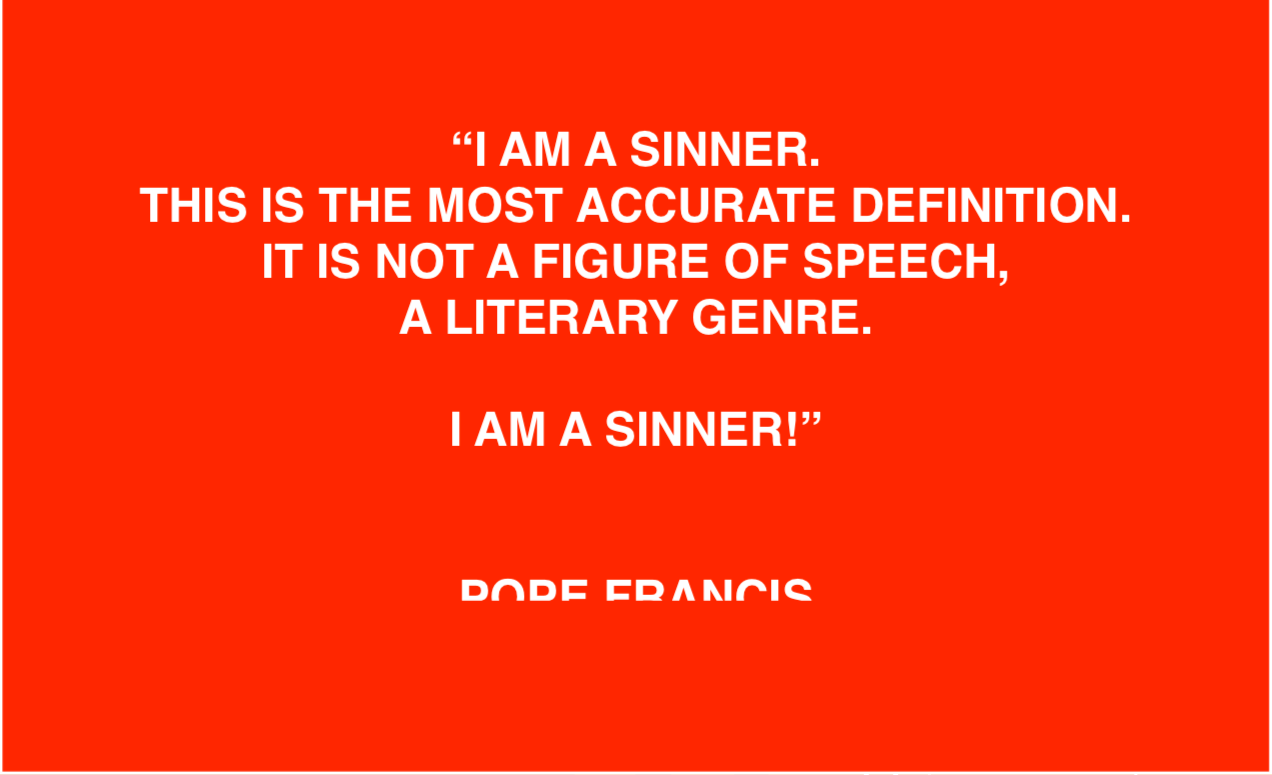 The most dominating energy ever is confusion, according to me. ‘Thousand monks, thousand religions’ – it is the Buddhist saying. Among these distinct philosophies, It becomes very difficult for an average human being to decide upon right and wrong. There are people who say that right and wrong are referential only. If Hinduism is revolving around a world of Karmic debts (cause and effect), Christians accommodate only good and right. Not only some body parts are bad for them but also some people too. Christians are yet to learn the art of accepting the diversity of the universe. Instead they are marching with a slogan of making everybody saints. They do not think about an impossible universe where there is only light.

Christian still think that sharing the story of a wicked pope might spoil our God-connection. No, it is not true. Nobody is infallible, nobody is ever going to be one either. Knowing that there were various types and models of Popes only strengthens our ability to use our common sense and thus march towards Realization without props and Koans. Love you Varghese Sir for your studies – Joseph Mattappally Also. Editor CCV).

From the very childhood every Catholic member of the SM Church is bombarded with paeans about the MOST HOLY CATHOLIC CHURCH and its HOLY POPES. When an organisation claims out of the world  holiness, the rational person will smell the rat. This is how this writer embarked on the attempt to glean fact from fiction. Given below are rudimentary sketches of some the “Holy Popes". There are many of the type described below, but the constraints of space call for limiting the narrative.

JohnXII. (born 937), named Octavian was a bastard of Alberic II, the  prince and all powerful ruler of Rome from 932 to 954. On his death bed Alberic made leading Romans to swear that when the reigning Pope Agapitus die, they should elect Octavian, prince and and the  supreme pontiff. Octavian was hardly 18 when he was made Pope. He was not all interested in spiritual things, but addicted to boorish pleasures. He gambled openly, worshiped pagan gods and had those opposed him blinded, castrated or murdered. He  turned the Vatican into a veritable whore house. He was either murdered by a jealous husband who caught him in flagrante with his wife or died of stroke during the act itself.

Innocent III (1198-1216) With the impotence of crusades becoming clear, he turned on his own people in the guise of rooting out heretics; instigated the Albigensian Crusade (1209) to crush  Cathar movement in Southern France. On 22nd July 1209, the entire peace loving and simple living and vegetarian food consuming population of Bezier of around 20,000 men, women and children was slaughtered though only about 500  professed Cathars inhabited this coastal town. Papal legate Arnold Amaury, a crusader,  ordered “kill them all, for the Lord knows which are his own”. Innocent forced Jews and Muslims to wear special badges to distinguish them from Christians.

It was Innocent  who introduced auricular confession as a tool to ferret out the so called heretics in 1215.

Alexander VI (Rodrigo Borgia (1492-1593) (born 9 January 1431). His maternal uncle Calistus III loaded the  young Rodrigo with benefices  and in 1456 named him cardinal deacon holding a string of lucrative bishoprics and abbeys. Rodrigo became vice-chancellor of the Holy See in 1457 and under the next four popes amazed vast wealth becoming the second richest Cardinal. Following Innocent VIII’s death, although he was a Spaniard and thus not a favourite to become Pope, he managed to garner support from the majority of Cardinals by barefaced bribery and promises of rich preferments and got elected as the Pope.

Rodrigo had reportedly committed his  first murder by the age of 12. He led an openly licentious life, fathering no fewer than 10 illegitimate children with various mistresses who were set up in smart houses across Rome. Of the four children born to his favourite concubine, the aristocratic Roman Vannozza Catanei-Juan, he was fond of son Cesare and daughter Lucrezia?

He made his son Cesare, a Cardinal at the age of 12 and afterwards a general. Cesare by resorting to duplicity and murder seized much of Italy.

Alexander’s notorious daughter Lucrezia who was made Duchess of Ferrara, at the age of 21, was married off to Alfonso d’ Este in February 1502 by coercion and payment of dowery of gold worth 100,000 ducats and cash of 75,000 ducats in addition to silver plates and other valuables. Lucrezia had already been married twice, she had  divorced her first husband, the Lord of Pesaro on the most unlikely ground that the marriage had never been consummated. Alexander forced his unfortunate son-in-law to declare that he was impotent. Her second husband a Neapolitan and noble was strangled to death by Cesare’s murderers. Lucrezia had several lovers. She was rumoured to have had  committed incest not only with her four brothers but also with her father, the Pope.

Alexander’s reign was the nadir of spiritual and moral decadence of papacy with rampant murders on  daily basis, many of them instigated by the Pope himself going unpunished. The  favoured  method of assassination was poisoning to painful death.

The Pope was poisoned, his tongue grotesquely engorged, his frozen mouth, fuming and the corpse swollen;  the attendants had to force it into the coffin by jumping on it, at which point it began releasing sulphurous gases from every office. Only four prelates attended the funeral.

His lusts turned Rome into a carnival of corruption with prostitutes swarming the papal courts. On 30th October 1501, he held a supper in the papal apartments. When the tables were cleared, 50 most beautiful prostitutes of Rome entered the hall and began dancing with the guests before being made to remove their cloths and crawl naked around the floor on all fours picking up scattered chestnuts. After the orgy began, the  guests were encouraged to have sex with as many prostitutes as possible. The Pope looked proudly on. The servants kept record of the couplings. The Pope handed out prizes to those men who coupled most (The Ballet of Chestnuts)

So pervasive was the lingering moral decadence in the reign of Alexander, that his successor Julius II (another notorious character, drunkard, womaniser and war monger, who took the name Julius after Julius Caesar) refused point blank to occupy the apartment of “that wretch”

Pope Sixtus IV (1471-84) authorised the Spanish Inquisition which lasted 354 years. During this period of terror and extreme brutal killings, the Inquisition prosecuted around 100,000 people for heresy of whom about 5000 were executed.

The most notorious Popes.

The tail piece: Only one woman has achieved a legendary status through both her devout spirituality and implied sexuality. The wonder of wonders is that she was not really a woman at all. The seemingly orgasmic euphoria on display in Bernini’s sculpture “The Ecstasy of St, Theresa (1652) depicting  her encounter with a beautiful angel with a long fiery spear thrusting it “at my heart and pierce my entire entrails" is less a spiritual sublimity but more a  sexual ecstasy.