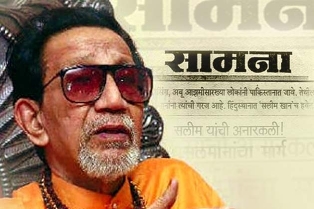 Mumbai: If you are a Christian or Muslims in India, be prepared for undergoing sterilization. That is what awaits the two communities if a rightwing Hindu party has its way.

The Shiva Sena (army of Shiva), a coalition partner of the National Democratic Alliance that rules the federal government, says religious minorities such as Christians and Muslims in India have to adhere to family planning as their growing population has become a threat to Hindus.

This suggestion appeared as an editorial in the party’s mouthpiece, Saamna (confrontation) days after it published a controversial column on denying voting rights for Muslims since they seem to vote en bloc.

The ascetic woman had called for an “emergency” to force “Muslims and Christians to undergo sterilization (nasbandi) so that they can’t increase their numbers.”

“What she meant was family planning…She should not have uttered the word ‘nasbandi’. But family planning and population control are one and the same thing,” the Sena said in its editorial today, adding “even stray dogs cannot be sterilized forcefully, as Maneka Gandhi is standing up for them. But stray dogs later bite people.”

It advocates smaller families for Muslims to stay “happy and healthy,” saying, “When we raise the demand for performing ‘nasbandi’ – sorry, family planning – it is in the best interests of the country and the Muslim community… With family planning, they will be able to feed and educate the children and live better lives…”

The Sena has slammed Samajwadi Party leader Azam Khan for his recent statement that Muslims are poor so they produce more children. “We are wasting time engaging in a useless debate on ‘nasbandi’ versus ‘family planning’… If nothing else, the Muslim leaders can at least sterilize their communal ideology and save the country,” it writes.

On Sunday, Shiv Sena leader Sanjay Raut sparked a major controversy by saying in a column that Muslims in the country were being used for vote bank politics and that revoking their voting rights would solve their problems.

As nationwide criticism poured in, Raut, who is Saamana’s executive editor and a member of Parliament, alleged he was “misunderstood.”