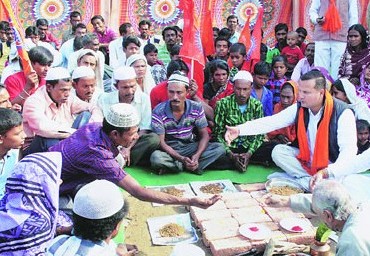 Aligarh: Dharam Jagran Samiti, an RSS offshoot, has distributed pamphlets in Aligarh seeking donations for converting Christians and Muslims to

Hinduism. The pamphlet says it costs 200,000 rupees to convert a Christian and 500,000 rupes to convert a Muslim. It has set December 25 as the date for a major conversion ceremony and put down an annual target of 200,000 conversions.

The pamphlets, carrying the letter head of the Dharam Jagran Samiti, pashchim chhetra (western UP, Braj prant, Meerut and Uttarakhand), have found their way to many houses in Aligarh. It proposes a fund for a grand “ghar vapsi” (homecoming) of Christians and Muslims, who are a “samasya” (problem) in the country.

The letter addresses recipients as “bandhuvar” (friends) and says: “Lots of money will be required in the ‘ghar vapsi’ because the work of conversion is increasing — more workers and more people to be covered. Please contribute money so that all arrangements are in place.”

Asked why are Muslims and Christians a “samasya”, Kanshinath Bansal, a key member of the Samiti, said, “Because Christianity is a samasya. Muslim (sic) is also a samasya. One worker needs that much money to work on a samasya every year.”

This came even as Yogi Adityanath, the firebrand BJP MP from Gorakhpur, confirmed his visit on December 25 to Aligarh for an event that aims to convert 5,000 Muslims and 1,000 Christians at the local Maheshwari College, reported .

Adityanath told TOI, “The administration and media have given it an exaggerated look. People are willingly converting themselves in ‘ghar vapsi’. The event will happen as scheduled and I will be there.”

He added, “When Hindus convert to Islam or to Christianity, nobody comes in for a check. Why is this being done when they want to convert back to Hinduism? There are many other issues that the administration and media should concentrate on rather than this. Muslims in Agra had also written a letter asking for a mandir. The situation went out of control because of the interference of media, administration and sundry religious leaders.”

The district administration, already anxious, said it is not taking any chances. J Ravinder Goud, SSP Aligarh, said, “There is no question of giving permission for the ‘ghar vapsi’ that is being planned in Maheshwari College. The issue has already flared up. We are not allowing it and if in case there is a violation, we will deal with the situation accordingly.”

Not long ago, the Hindu outfit had taken over a small church on the outskirts of Aligarh, replacing the cross with a Shiva picture. Then, too, it had conducted a ‘ghar vapsi’ for 72 Valmikis, all of them Christians.

Christian and Muslim groups reacted with anger and caution. Community leader Vincent Joel said, “Ever since the church incident in Asroi, Christians have been praying for the dawn of achche din, where the country is not divided on the basis of religion or caste. We are praying to the Lord to grant the perpetrators of such mischief some wisdom.”

Muslim organizations Millat Bedari Muhim Committee and Forum for Muslim Studies and Analysis condemned the “open and public call for conversion”. Professor Razaullah Khan, president of both the outfits, said, “It is very disturbing to see how publicly they call for ghar vapsi. (UP) elections are slated for 2017 and now this gathering is being done to polarize society and divide votes. We should not let it happen.”