High-ranking US Jesuit: Married priests would be healthy for the Church 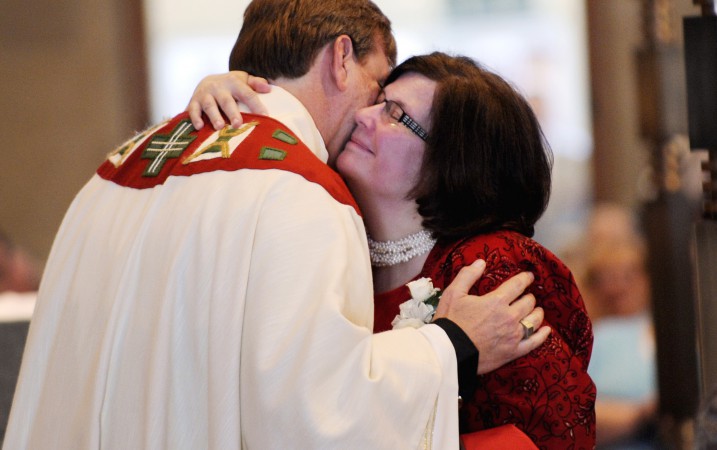 The Rev. Scott Caton was hugged by his wife Bonnie after receiving his vestments during his ordination Mass at Sacred Heart Cathedral in Rochester, N.Y. in 2014. Caton is a married father of six who began pursuing the priesthood in 2000 and received Vatican permission in 2010 to take the final steps toward ordination. (Photo by Mike Crupi/CNS)

He has appeared on Fox News and MSNBC to discuss the Catholic Church’s influence in public life. Originally from Massachusetts, Michael is a graduate of Saint Anselm College and Yale Divinity School. He is the author of The Tweetable Pope, the first book to look at the papacy of Pope Francis through his revelatory use of social media, due out Sept. 8.

A high-ranking US Jesuit says he wouldn’t be surprised if Pope Francis ushers in an era of married priests in the Roman Catholic Church, and says the move would be healthy for the Church.

“I used to say, ‘Well, it will change but probably not in my lifetime.’ And then Pope Francis came along, and what I see him doing is opening the avenues for discussion,” the Rev. Michael Garanzini, chancellor of Loyola University Chicago and the secretary for higher education for the worldwide Jesuits, told Crain’s Chicago Business on Monday.

He told the paper that the clergy abuse scandal spurred discussion of married priests and led to an “openness to a priest’s physical and psychological health.”Garanzini noted that the Catholic Church already has some married priests, most notably when married Anglican priests convert to Catholicism.

FROM THE ARCHIVES: I’m a Catholic priest — and I’m married

He said he expects bishops from England to raise the issue at the next Synod on the Family at the Vatican in October.

“It’s spurring the obvious point that one priest with a wife operates just as effectively or perhaps more effectively than the priest down the block,” Garanzini said. “There will always be a role for celibate clergy, and there will probably be an opening of ministry positions to a non-celibate or married clergy.”

He told Crain’s that although previous popes may have been reluctant to talk about the issue, Francis may be willing.

“I think a pope like Francis will say, ‘Let’s discuss it,'” he said.

Pope Francis has hinted in the past that he’s willing to have a conversation about married priests, as recently as February when he told a group of Italian priests that the issue is “on his agenda.”

Last May, Francis told reporters that priestly celibacy “is a rule of life that I appreciate very much, and I think it is a gift for the Church. But since it’s not a dogma, the door is always open.”

Garanzini served as president of Loyola University Chicago for 14 years before he stepped down in June. He currently serves as chancellor of the nearly 16,000-student university, for which he oversaw a $500 million capital fundraising campaign.

There is disagreement over exactly when priestly celibacy started in practice, but for nearly all Catholic clergy, marriage has been off the table for about half the Church’s 2,000-year existence.

FROM THE ARCHIVES: How did the Church end up with married priests?

In 1980, Pope John Paul II created a special provision for Episcopalian priests and some other Protestant ministers who chose to become Catholic, but wanted to remain active in ministry.

Five years ago, Pope Benedict XVI took it a step further: He created something called the Personal Ordinariate of the Chair of St. Peter. It’s the equivalent of a Catholic diocese, but it’s not bound by geography. The new structure enabled Episcopal priests, and even entire Episcopal congregations, to “swim the Tiber” and become Catholic. These faith communities worship with distinctly Anglo tinges, and many are led by married priests.

Other married Catholic priests come from some Eastern Rite churches, whose worship is similar to Orthodox Churches, that are in full communion with Rome and that ordain married men in Africa, Asia, and Europe.

Previously, Eastern rite churches in North America could only ordain celibate men to the priesthood. But last year, Pope Francis approved the first priestly ordination of a married Eastern Rite seminarian living in the United States, and the Vatican then lifted an 85-year ban on Eastern-rite churches ordaining married men in Canada and the United States.

Proponents of opening up the priesthood to married men believe the move could give the Church badly needed clergy. Last November, for example, Bishop Erwin Krautler of Brazil floated an idea to Francis of ordaining married men in order to alleviate the priest shortage in his diocese. Brazil’s National Conference of Bishops is reportedly studying the matter.

Update: A previous version of this story reported that only celibate men could be ordained in Eastern rite churches in the United States. It has been updated to reflect the Vatican’s lifting of this ban.