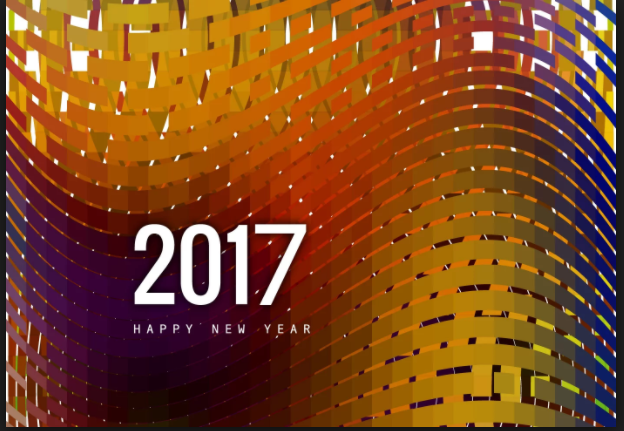 We wish you a very Happy grace-filled New Year 2017 just dawning. This we do with confidence because we are to be creators of our own destiny for good or bad, if only we set to work with determination until we succeed. Success is never for the ones who give up half way.

Yes it is true, we are in the midst of prophets of gloom and doom predicting despair at the sight of the triumph of a Trump in US, a cashless India under Modi, the rise of right wing divisive forces in Europe led by Brexit and other countries yearning exit from the European union in spite of the age-old, time-tested maxim warning us, “united we stand, divided we fall”, and that we are, and have to be masters of our destiny. We are not to be a mindless mass of matter to be tossed about by the wind and waves to be scattered on forgotten shores.

Of course we can’t see future for sure, not even beyond our nose. But we have been overcoming such dilemmas daily, more often successfully, with our  God-given insight, foresight and hindsight. These three in turn are the product of our  innate capacity to be an optimist, pessimist or realist. What are we to do now as we stand at the cross roads of 2016 and 2017: hope or despair? We don’t have to be necessarily a pessimists or optimists. There is the third option to be  realists. Then why hesitate to  build on it an edifice of hope, not of despair?

What do we actually see as we peep into 2017 through the dark prism called Trump and other things we mentioned blurring our vision? It is Confusion confounded let lose by the dance or duel of two heavenly and hellish bewitching beauties called hope and despair. Commenting on it opinion columnitst E.J. Dionne Jr. writes in Washinton Post:

“Gloom is a terrible way to ring out the old, and despair is of no help in trying to imagine the new. So let us consider what good might come from the political situation in which we will find ourselves in 2017. Doing this does not require denying the dangers posed by a Donald Trump presidency or the demolition of progressive achievements he could oversee. It does mean remembering an important distinction President Obama has made ever since he entered public life: that “hope is not blind optimism.”

“Hope,” he argued, “is that thing inside us that insists, despite all evidence to the contrary, that something better awaits us if we have the courage to reach for it, and to work for it, and to fight for it” even when your country is bitterly divided.

“It is this spirit that began to take hold almost immediately after Trump’s election. Americans in large numbers, particularly the young, quickly realized that the coming months and years will require new and creative forms of political witness and organization.

“Trump’s ascendancy is already calling forth social and political initiatives aimed at defending the achievements of the Obama years (particularly Obamacare), protecting the environment, standing up for immigrants and minorities, preserving civil liberties, civil rights and voting rights, and highlighting how Trump’s policies contradict his promises to working-class voters. Here is a bet that the mobilization against Trump will rival in size and influence the tea party uprising against Obama.

“Another positive for the future: Trump’s campaign forced elites and the media to pay attention to the parts of the country that have been falling behind economically and to the despair that afflicts so many, particularly in rural and small-town America.

“It should not have taken Trump (or Bernie Sanders) to bring their problems to the fore. If the powers that be had been paying more attention, the resentments and dissatisfactions that Trump exploited might not have been there for him to stoke.

“In 1972, Richard Sennett and Jonathan Cobb wrote a memorable book called “The Hidden Injuries of Class.” We forget about economic inequality at our peril. Every generation or so, it seems, we need to be reawakened to the injustices of both class and race and rededicate ourselves to remedying them together. We can now move forward with this in mind.

“From the outline of his policies so far and from the right-wing Team of Billionaires he has chosen to run large parts of his government, it’s hard to see how Trump will advance the material interests of those who voted for him. But justified skepticism about Trump is no substitute for fresh thinking by his opponents about what they will do when they next take power…..

“It is also useful that Republicans will be put through a series of tests. If they fail to apply to Trump the same ethical standards they demanded of Hillary Clinton, voters will notice. The Republicans’ claims to fiscal prudence will be exposed as fiction if they follow through on pledges to combine large tax cuts, mostly for the rich, with big increases in military spending.

“Republicans ……. claim to be pleased that they can now enact their full agenda on shrinking Medicare, Medicaid and other social programs. But as their plans move closer to reality, voters – including Trump’s supporters – will start counting the costs. In large numbers, they will find them too high. Lastly, it’s hard to imagine a president more likely to inspire Obama Nostalgia than Donald Trump. Folk singer Joni Mitchell might as well have been talking about politics when she taught us that you don’t know what you’ve got till it’s gone.”

Hoping against hope we have to fight on until we errace all black spots and red threats that 2017 challenges us through modern prophets of gloom. Like it or not, all of us have to live in hope or die in despair.

For believers hope is not based on what is today and no more tomorrow, but on a God of goodness who writes straight with crooked lines (that is, each one of us),  who creates and preserves humans for a glorious end which is to be found out by us mortals themselves, as in a treasure hunt in  relentless search. In this search, every human being, you and I, has to contribute his/her share.

So for believers there should not be room for despair which is the complete lack of hope. Hope instead is not a wishful thing but a confident expectation, a certainty in the final triumph of the good, in spite of or because of challenging hurdles like the passing triumph of  a solitary Trump. May be, as St.Paul says (2 Cor’4:8): “We are hard pressed on every side, but not crushed; perplexed, but not in despair.” So let the battalion or the caravan march on in hope to overcome all obstacles. United, we  shall overcome! Make 2017 happy, adventurous and glorious!