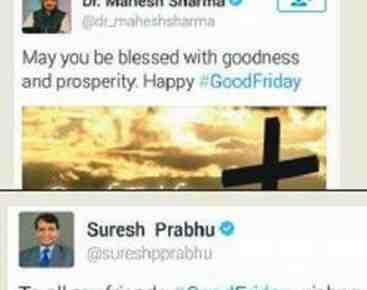 New Delhi: On Good Friday, four senior Ministers of Prime Minister Narendra Modi’s Cabinet took to Twitter to wish their followers a Happy Good Friday, turning the day normally set aside for reflection, grieving and prayers into a celebratory moment, in the process, setting off a minor outrage on the social media platform. Some of them later deleted their tweets.

Among the first to tweet, was Minister for Railways Suresh Prabhu, who, at 7.19 a.m., greeted his followers, “Wishing all friends a happy #GoodFriday.”

Good Friday is a day observed for the crucifixion of Jesus Christ. However, even Culture Minister Mahesh Sharma chose to associate the day with prosperity and wished his followers with this tweet: May you be blessed with goodness and prosperity. Happy #GoodFriday”. The Minister deleted his tweet later following criticism. The Hindu reported.

Others followed. Dharmendra Pradhan, Minister of State for Petroleum and Natural Gas took to Twitter with, “Good Friday Wishes to everyone. May God Bless us all.” Najma Heptullah too sent out “warm Greetings on #Good Friday with May God bless us All.”

Father Paul Thelakkat, a senior Catholic priest, said, “Normally, people don’t greet each other on the day Jesus was crucified. It is the tragedy of the cross which is remembered on this day. I do not wish to accuse them [Prime Minister Narendra Modi’s Cabinet colleagues] as I wonder whether they are aware of the nuance of the day. This kind of niceties they need not know.”

As some of the Ministers deleted their tweets after lessons were given to them on Twitter, @OfficeOfRg, the official website of Congress vice-president Rahul Gandhi tweeted, “On Good Friday a day of reflection and prayer, may the spirit of love, compassion and sacrifice guide our thoughts and action.”

On the PM’s tweet, “Good Friday is a day of prayer & a day to remember the noble, pious & compassionate thoughts of Jesus Christ that touched many lives,” Father Thelakkat said: “The greeting was unusual as the Prime Minister is known to keep his silence. This time, he remembered. I think it is a good sign.”

Mr. Modi’s tweet led to a minor change on Railway Minister Suresh Prabhu’s twitter handle. He struck a sombre note with this message, “Today we commemorate the passion, suffering, death on the cross of Jesus Christ. May this day of prayer enlighten our mind and bring peace.”

The observance of Good Friday was also noted by Delhi Chief Minister Arvind Kejriwal, whose tweet “Drawing inspiration from the teachings of Jesus on this Good Friday,” was criticised for drawing political mileage.