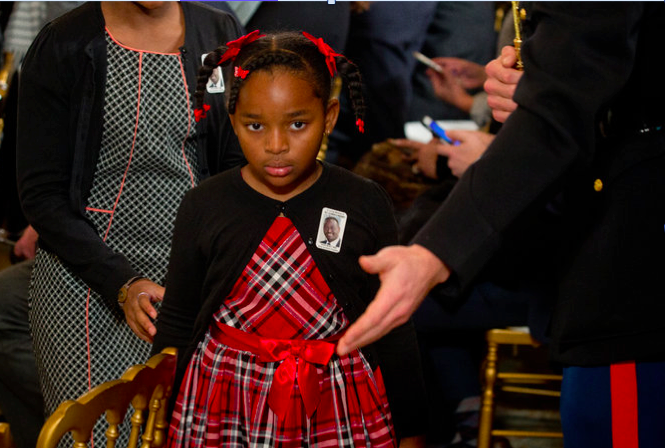 Malana Pinckney, daughter of the late Rev. Clementa Pinckney, at President Obama's speech on Tuesday that called for new gun safety measures. Her father was a South Carolina state senator who was killed during a mass shooting at a church last June. Credit Stephen Crowley/The New York Times

(Note: Republicans and gun lobby poke fun at Obama for shedding  tears at the thought of so

many children shot dead in US. You don’t have to believe either. Just listen to what facts say and act on them to be rational and not emotional.  What is needed is an evidence based laws and enforcing them strictly. “There’s no magic wand to solve gun violence in America, but neither is it immutable fate that 32,000 Americans die from firearms each year,” says this report and rightly. james kottoor, editor)

President Obama shed tears on Tuesday as he called for new gun safety measures, and some critics perceived weakness or wimpishness. Really? On the contrary,. we should all be in tears that 225,000 Americans have already died of gun violence in his seven years in office

The shame is not a president weeping a bit, but that he has not been able to prevent roughly as many people dying of guns in America on his watch as have been killed in the Syrian civil war (where estimates range from fewer than 200,000 to more than 300,000). Yes, the American gun toll includes suicides and, yes, Syria is a smaller country, but it’s worth a cry that a “peaceful” America during Obama’s tenure has lost roughly as many lives to gunfire as Syria has in civil war.

Ted Cruz responded to the president’s executive actions with a web page showing a scowling Obama in a helmet, looking like a jackbooted thug staging a home invasion, with the warning, “Obama wants your guns.” Chris Christie protested that Obama was behaving like a “petulant child.” Jeb Bush decried Obama’s “gun-grabbing agenda.” Donald Trump warned that Obama was moving toward banning guns. The upshot of all this scaremongering will be more Americans rushing out to buy firearms.

Look, let’s acknowledge that liberals have not handled gun issues well over the years. Liberals often antagonize gun owners by coming across as patronizing or insulting — as well as spectacularly unknowledgeable about the guns they seek to regulate. But on the basic question of whether more guns create more safety or more risk, the evidence seems clear: Most gun owners use firearms responsibly, but with more guns there are more tragedies.Exclude guns and the U.S. has a rate for many violent crimes similar to that of other rich countries. But because we have 300 million guns sloshing around, some in the hands of high-risk individuals, we have a gun homicide rate that is about 20 times that of Australia (which cracked down on guns after a mass shooting there).

Gun advocates say criminals will always have guns, so regulations make no difference. But increasingly we have evidence that this is wrong.The states with the most restrictive gun laws have the lowest gun death rates (including suicides). Take Massachusetts and New York, which have some of the tightest gun restrictions in America; they have three or four gun deaths per 100,000 inhabitants per year. At the other extreme, two of the states with the most permissive gun regulations are Alaska and Louisiana, and both have gun death rates about five times as high: more than 19 per 100,000 inhabitants.

Republican presidential candidates should look at the natural experiment that occurred when Missouri eased restrictions on buying handguns. The result was a 25 percent rise in the firearm homicide rate, according to a study in the Journal of Urban Health.In contrast, Connecticut tightened regulations on buying handguns, and gun homicides there fell by 40 percent, according to the American Journal of Public Health.

This is not to say that regulations always work, or that fixing the problem is simple. Daniel W. Webster of Johns Hopkins University cites research that keeping guns from people with past convictions for domestic violence doesn’t make much of a difference. But blocking access to guns by people subject to current domestic violence restraining orders does reduce killings of intimate partners.

We need an evidence-driven public health approach, modeled on our highly successful regulation of cars to reduce auto deaths. That’s the approach the Obama executive actions pursue. Republicans have said for years that we should focus on enforcing existing laws. That’s what Obama is doing.

Likewise, Obama is pushing to investigate the feasibility of smart guns that operate with a fingerprint or a PIN. This may or may not work, but it’s worth a try in a nation where perhaps 300,000 guns are stolen annually. A toddler in America shoots someone on average once a week because guns are so easy to pick up and fire. If our cellphones can be made to work only with a PIN, it’s crazy that anyone can use a stolen assault rifle.

There’s no magic wand to solve gun violence in America, but neither is it immutable fate that 32,000 Americans die from firearms each year. We know from the experience of states like Connecticut and Missouri that sensible regulations save lives. And why wouldn’t we want to keep guns from men subject to domestic violence restraining orders if the result is fewer women murdered by jilted boyfriends?

The Republican presidential candidates are on the wrong side of history here. While even Republican voters overwhelmingly say in polls that they favor sensible steps like universal background checks, the Republican candidates are politicizing what should be a public health issue, and they are scaring Americans into buying more guns, which magnifies the problem and causes more carnage.