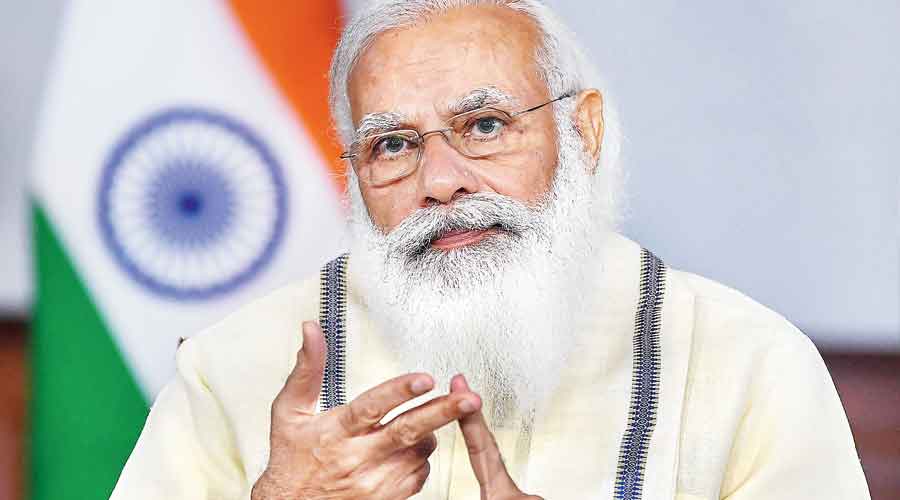 Cover Photo: Prime Minister Narendra Modi holds an online conference with officials of nine states on Tuesday 18 May on Covid management.  He described the officials as "Field Commanders"  in the fight against Covid-19. PTI

May 11 is the day well-known poet Parul Khakhar posted a poem, Shav-vahini Ganga, on her Facebook page; it spread like wildfire on social media.

Perhaps it is the first time since Narendra Modi became Prime Minister that a poem written in his mother tongue Gujarati has not only criticised the government but also voiced the anguish of the common man at how the second coronavirus wave has ravaged us.

May 11 is the day well-known Gujarati poet Parul Khakhar posted a poem, Shav-vahini Ganga, on her Facebook page. It spread like wildfire on social media. Gujarati literati were left numb, they knew not how to react to it.

But common Gujaratis, many of who have nothing to do with literature, found it appealing and echoing their sentiments. They shared it widely. Within a day or two, the poem got translated into English, Hindi, Marathi and a few other Indian languages. Khakhar was praised for writing such a powerful and brave poem but also bombarded with abusive messages from troll armies.

Khakhar, 51, is essentially known for her romantic poetry; political issues are not something she had earlier touched. She started her literary journey comparatively very late in life, after getting married, having had children and settled.

Soon she earned herself a place of repute in Gujarati literary circles. She remains a normal Gujarati homemaker and seldom indulges in any political discourse. I have read poetry with her at several literary events in the past.

Right-wing opinion is furious because her latest poem came like an unexpected bolt to them; Khakhar was not meant to be writing such stuff. She has never been anti-establishment.

But the devastation around her because of the mismanagement of the second Covid wave and the catastrophic failure of the government completely shook her up from inside. This is what forced her to write such a political and radical poem. She has been trolled so heavily after she uploaded it that she has had to lock her Facebook profile.

I happened to speak to her over phone on Monday morning. I congratulated her for not deleting her poem from social media despite such pressure. She replied, laughing lightly: “Why should I delete when I have said nothing wrong.” Her voice was reassuring.

Her long-time admirers have turned their backs on her and distanced themselves from her and her poetry.

I can relate to what Khakhar is going through right now. In October 2015 when I decided to write a letter to the President of India (then, the late Pranab Mukherjee) regarding the increasing culture of intolerance in the country, I had requested well-known writers and artists from Gujarat for their signatures on the appeal. Most of them morally supported the cause but refused to put their names on the appeal. Nobody was ready to take the risk of speaking the truth.

Over recent years, they have acquired the habit of speaking in hushed tones for fear of being overheard. But I did receive support from artists, writers and filmmakers from outside Gujarat. They signed the appeal. One national newspaper put it on the front page and when that happened, Gujarati literati had gone numb.

Subsequently, my name was dropped from many literary events and award nominations. We started a movement named Dakshinayan along with scholar Ganesh Devy and a few other writers and activist friends later that year.

Khakhar’s poem has now galvanised the pro-establishment machinery into action. A well-known columnist from Gujarat dedicated her newspaper column to criticise the poem and questioned Khakhar’s intention. She said that it had now become a fashion to criticise the government. A few others have raised questions against the use of words like “fiddle” and “Billa-Ranga” in her poem.

Many have become literary critics overnight and are passing judgement on the literary merits of the poem. A few turned poets too and wrote poetic replies. The intention is very clear: no other poet or writer should get motivated to follow Khakhar’s path. A bunch of pro-government writers and columnists landed on social media to argue for the government.

Major Gujarati poets are silent. I do support Parul Khakhar’s poem and wrote about it openly on social media. I am getting calls from fellow Gujarati writers to step back.

The discourse kicked off by Khakhar’s poem is unprecedented in recent times in Gujarat. I have received many calls over the past few days from the Gujarati diaspora regarding her poem and her poetic journey. Many who had never heard her name are supporting her poem. This poem has crossed boundaries of languages. Nobody can stop its journey now. Not even the poet herself.

So the corpses rise,

And in unison they cry,

All is well in your realm, O, Emperor,

All is well in your realm of Ram.

To cremate our dead,

Nor left is any timber.

And all around us do phantoms dance,

Their macabre dance of death.

Oh, seek they do a moment’s rest.

The echo of bangles smashed,

The bleating of broken hearts in our homes.

And you watch, bravo Billa-Ranga!

You watch the flames and you fiddle.

The Ganga in your realm of Ram,

‘tis the carrier of corpses, the Ganga.

Your divine aspect, your appurtenance burnished,

How luminous your presence, and oh, how brilliant.

The truth, if only people knew,

The truth that you are stone.

Should courage come to you, or conviction,

Come forth and say it loud:

“O, Emperor, you are naked,

My Emperor, you are naked.”

In whose realm of Ram,

The Ganga has thus become,

The Carrier of Corpses.