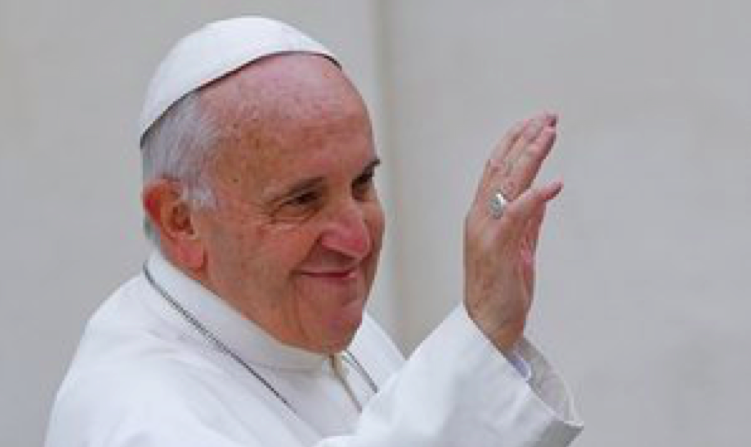 Pope Francis upholds an ideal of marriage, but tries not to let it overshadow the reality

Pope Francis. ‘It’s certain that he believes the real business of the church is with those who can’t live up to its teachings rather than those who find it easy.’ Photograph: Stefano Rellandini/Reuters

(Note: The most unsettling statement in  this editorial to my thinking is that Francis “could not be expected to change the rules openly. Neither has he attempted this. Instead he has made it entirely clear that the rules are there to be upheld, to be admired, and learned from – and then crumpled like waste paper when that’s what justice demands.” Then are not all “rules” just barks without any bite? Then how is it different from saying: “Rules are made to be broken?” Moses did just that – in a fit of rage he dashed tablets of commandments to pieces —  when he came down from the mountain and  saw the chosen people dancing, reveling and worshiping the golden calf. Jesus did just the opposite. He told the woman caught in adultery: “Neither do I condemn you… but sin no more!”, upheld the rule after pardoning her. “Pardon always, but uphold the rule in the same breath?”  Is this going to be the rule in this year of mercy? If so we better understand the logic of his saying: “The name

of our God is Mercy, He is never tired of forgiving, it is we who are tired of asking forgiveness.” In a way it sounds contradictory – irrational and illogical – but that is going to  be the way forward for the Church under Francis. Speaking more plainly by guaranteeing pardon for any sin every time is he not openly telling habitual womanizers “Don’t bother breaking rules, Mercy will have the last laugh?” james kottoor, editor)

When a pope pronounces, there are two mistakes to make. The first is to suppose that Catholics will feel bound to obey him; the second to decide he is not worth listening to.

This is especially true of Pope Francis, who has some really interesting and important things to say and fewer illusions than most recent popes about how they will be received by the faithful. His most recent production has been a summary of two long and occasionally acrimonious meetings of bishops about what the Catholic church should do regarding modern families in a changing world which is, in many respects, hostile to all forms of permanence, and to all promises that are unconditional, rather than contractual. The most neuralgic point was the reception of communion by divorced and remarried couples. This is something which is clearly forbidden by church law, and just as clearly accepted in all those western countries where divorce has become part of the pattern of normal life.

The most powerful lobby for official recognition of this change came from among the German bishops, who are financed by a voluntary tax collected by the state from people who identify as Catholics, rather than by direct collection from regular congregations. This means that they are rather more directly dependent on the good opinions of bad Catholics than most prelates. They also have a respect for the law, and a sense that it ought to correspond with the way that people actually behave.

Against them were ranged a coalition representing the conservative ideal, that the church ought to respect only the opinions of good Catholics, as defined by the hierarchy. Pope Francis himself would seem to have the instincts of the liberal party. It’s certain that he believes the real business of the church is with those who can’t live up to its teachings rather than those who find it easy. In everything he has said about mercy he is reaching out to those who have been wounded by life and even by the church.

The conservatives could – and did – point to 2,000 years of Catholic tradition. The severity of lifelong monogamy was always tempered by the process of annulment, available to rich and well-connected Catholics, but hardly to the poor. Nonetheless, this is an institution which takes its own traditions very seriously indeed. As the pope points out, he could not be expected to change the rules openly. Neither has he attempted this.

Instead he has made it entirely clear that the rules are there to be upheld, to be admired, and learned from – and then crumpled like waste paper when that’s what justice demands. Since this is really what already happens in many parts of the world, he can be confident of obedience from the liberals, while the conservatives can still trumpet that nothing has changed. But it has. “We must see in the women’s movement the working of the Spirit for a clearer recognition of the dignity and rights of women,” writes this pope, and: “It is legitimate and right to reject older forms of the traditional family marked by authoritarianism and even violence … the verbal, physical and sexual violence that women endure in some marriages contradicts the very nature of the conjugal union.”

This doesn’t mean that Pope Francis has signed up to contemporary liberal morality. The document repeats all the traditional dogmas: the absurd condemnation of artificial birth control, the rejection of IVF, and of gay marriage and the absolute condemnation of all abortion. But the weight and the passion appear to come when it upholds lifelong faithful heterosexual monogamy as an ideal superior to the ideology of mutual consumerist choice. He believes in covenants, not in contracts.

The case is sometimes pleaded in terms of earthy realism. Marriage, he says, is valuable because it is the greatest form of friendship. “It is a union possessing all the traits of a good friendship: concern for the good of the other, reciprocity, intimacy, warmth, stability and the resemblance born of a shared life.” Pope Francis is wrong about many things, and his church is horribly flawed. But anyone who can write that must after all be on the side of the angels.