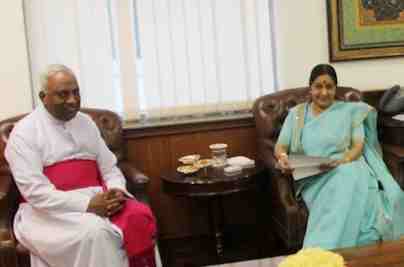 The government did not give details of the negotiations as it would endanger the process.

The Indian government has ruled out crucifixion rumors about a Catholic priest abducted in Yemen early March and said hectic efforts are on to secure his freedom.

Swaraj has assured the Church delegation that Father Uzhunnalil is “safe” and that the government was adopting “all possible means for the quick and safe release” of the priest, Father Chinnayan said.

Father Uzhunnalil, a Salesain priest of Bangalore province, was taken away on March 4 by suspected Islamic terrorist after they attacked a home for the aged in Aden run by Missionaries of Charity nuns, and gunned down 16 people.

Church officials last week requested government’s help to establish the “real fate” of the abducted priest after rumors spread in the media that terrorists have tortured and crucified the priest on Good Friday.

Father Chinnayan said the government refused to “divulge the details of the negotiations and the technicalities” as it would endanger the ongoing process.

However, she shared with the delegation “the strenuous effort” her ministry has taken to ensure a safe passage for Sister Rema, the only surviving nun in the Aden attack.

The Church delegation thanked the government on behalf of the “whole Church in India” for the various steps taken to rescue Father Uzhunnalil.