(Note: “United we stand, divided we fall.”  That is what the wisdom of ages and achievements of humans working together constantly exhorts us even in the midst of all factional feuds and international rivalries. Human wisdom should finally take us to a world government  after perfecting human endeavors  like European unity, United Nations,  World Parliament of religions etc. When peoples and nations get together, think together and work  together they achieve great feats and marvels like Suez Canal, Panama Canal, British French undersea tunnel and now the Gotthard tunnel.

What has it achieved? In the first place it has strengthened European unity. Secondly it bacons disunited fighting nations to work united to become a force for good. The tunnel has cost 20 years of hard work, $12 billion in cash and nine lives. The completed tunnel travels

up to 2.3 km below the surface of the mountains above. Can India dream of achieving anything distantly similar instead of talking ad nauseam about bullet trains and smart cities? It has constructed millions of toilets.  Question is when will water supplied to use them? james kottoor, editor)

There is no reason why elephants cannot be placed in a freight train if they were to cross the Alps in a subterranean journey made possible by modern human engineering expertise and ingenuity. The famous journeys the pachyderms made as a war corps through the Alps for the great Carthaginian military strategist Hannibal Barca would certainly have been more arduous and, in fact, only a few elephants survived the march in the 3rd century BCE to Italy. Today, the Gotthard tunnel, the world’s longest and deepest rail tunnel, promises a far cleaner environment and a lifeline for the Alpine region by replacing a million lorries in the carrying of goods across Europe.

The 57-km, twin-bore Gotthard, which surpasses Japan’s 53.9-km Seikan rail tunnel and the Channel Tunnel, which completely revolutionised how people travel by linking France and the United Kingdom under the English Channel, is yet another feather to the cap of human thinking. As a work in progress, this one was phenomenal as it took 20 years, $12 billion and nine lives, and there is some way to go yet before freight begins passing through. 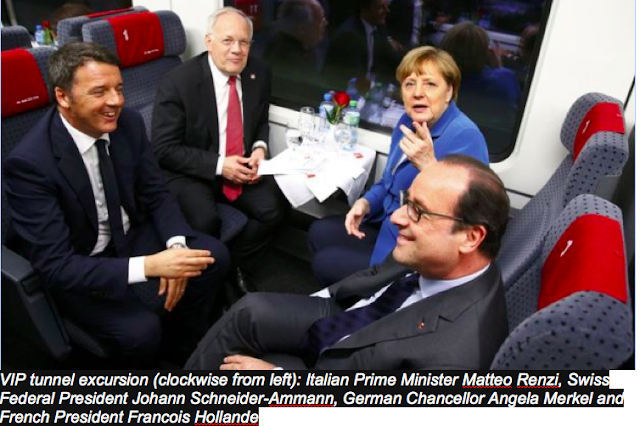 Switzerland’s fame for precision engineering may be tested in popularising such environmentally-sensitive movement for a whole range of goods, from Italian wine to German cars, besides tourists from the Netherlands through to Switzerland and Italy more quickly. The tunnel also stresses European unity, which in fact may have inspired French President Francois Hollande to get his message across about the UK referendum this month in an aside during the tunnel inaugural when he said European unity is good for Britain too.

Report from other sources

Mr Hollande, who took part with others in a follow-up trip through the tunnel on a train, emerged on the southern side to give a speech in which he compared the Gotthard to the Channel Tunnel.

Recalling the great Franco-British project, which was completed in 1994, he said: "Nobody could have imagined that one day you would be able to travel from England to France in that way."

"Since then we are more united than ever and I hope the British will remember that when the day comes," he added, to laughter and applause from the audience in the Swiss village of Pollegio.

The project, which cost more than $12bn (£8.3bn) to build, was endorsed by Swiss voters in a referendum in 1992. Voters then backed a proposal from environmental groups to move all freight travelling through Switzerland from road to rail two years later.

The completed tunnel travels up to 2.3 km below the surface of the mountains above and through rock that reaches temperatures of 46C.

Engineers had to dig and blast through 73 different kinds of rock, some as hard as granite and others as soft as sugar. More than 28m tonnes of rock was excavated, which was then broken down to help make the concrete used to build the tunnel.

Religious figures attended a blessing inside the tunnel on Wednesday

The world's longest and deepest rail tunnel has officially opened in Switzerland, after almost two decades of construction work.

The 57km (35-mile) twin-bore Gotthard base tunnel will provide a high-speed rail link under the Swiss Alps between northern and southern Europe.Switzerland says it will revolutionise European freight transport.Goods currently carried on the route by a million lorries a year will go by train instead.

The tunnel has overtaken Japan's 53.9km Seikan rail tunnel as the longest in the world and pushed the 50.5km Channel Tunnel linking the UK and France into third place.

Now the completed tunnel, delivered on time and within budget, will create a mainline rail connection between Rotterdam in the Netherlands and Genoa in Italy.When full services begin in December, the journey time for travellers between Zurich and Milan will be reduced by an hour to two hours and 40 minutes.

The tunnel's course is flat and straight instead of winding up through the mountains like the old rail tunnel and a road tunnel opened in 1980. About 260 freight trains and 65 passenger trains will pass through the tunnel each day in a journey taking as little as 17 minutes.

The tunnel is being financed by value-added and fuel taxes, road charges on heavy vehicles and state loans that are due to be repaid within a decade.Swiss bank Credit Suisse has said its economic benefits will include the easier movement of goods and increased tourism.

Nine workers died in accidents while the tunnel was under construction.Four were Germans, three Italians, and one each came from South Africa and Austria, according to German news agency dpa. They are commemorated by a plaque near the northern end of the tunnel, Swiss media report.