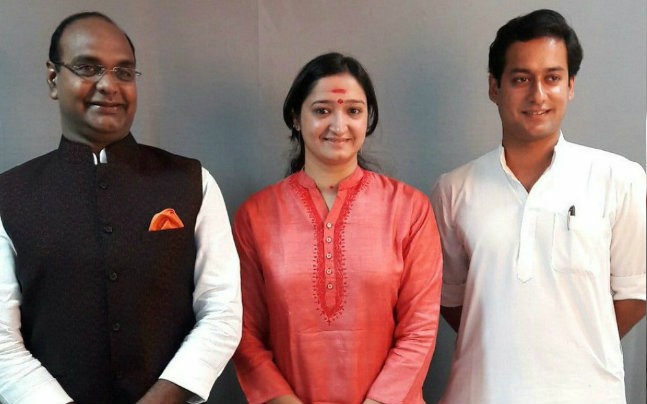 (Note: George Bernard Shaw reportedly said, “Politics is the last resort for the scoundrel”. With unabashed horse trading before and after elections to form governments, and legislators trying to secure pay hike, various allowances and lifelong pensions for themselves after just one term in office, not to speak of at least hundred fold increase in their assets (reported in CCV yesterday), this adage appears to hold true. If we put another way, how many former politicians have returned to civilian life and been successful in business or as professionals? Most of them are incapable of holding a proper job after losing elections. So they keep hanging around power centres in the hope of making a comeback.

However, at the India Today Mind Rocks Summit Bhopal 2017, three youth political icons of Madhya Pradesh, state minister Vishwas Sarang, youngest Congress MLA Jaivardhan Singh and Bhakti Sharma, the young Sarpanch of Barkhedi, Bhopal came to a consensus that politics can be a good vocation for the youth of today. Though the Church is apparently allergic to politics, for fear of losing control over its flock whom it wants to be meek and mute, Pope Emeritus Benedict XVI urged the Laity to come forward as Co-partners and not as collaborators of the Church and in his exhortations urged members of the Laity to take active part in all spheres of life, including politics.  For CCV readers and their friends, it would be an interesting exercise to make a list of how many frontline Christian politicians we have, politicians who will go the extra mile to develop our community from the grass-roots level. Isaac Gomes, Church Citizens’ Voice).

Politics can be a good vocation for the youth of today. This was the consensus among the emerging politicians of Madhya Pradesh at the India Today Mind Rocks Youth Summit Bhopal 2017.

Vishwas Sarang is considered a dynamic minister in the Shivraj Singh Chouhan government of Madhya Pradesh. Jaivardhan Singh is the son of veteran Congress leader Digvijay Singh while Bhakti Sharma is the first generation politician, who quit her promising career in the US and joined panchayat politics.

Emphasising that the youth should join politics in large numbers, Vishwas Sarang said, "If politicians are doing bad things in politics, it is because that the good people are going to MNCs. If good people look for jobs somewhere else bad people will control politics."

"Before Independence, Subhas Chandra Bose was referred to as Netaji. Today, calling someone Neta is ridiculing the person. But if we have change this youth must join politics," Sarang said, adding, "The fruit of politics is not always money."

WHAT ELSE THEY SAID: THINGS TO KNOW

A qualified engineer, Vishwas Sarang spoke about the youth policy launched by him. "It is often said that youth has lost their track. I feel that the youth of the nation is ready to become Vivekananda. What they need is a Ramkrishna Paramhans."

"We organised a youth parliament. We called youth leaders of all ideology and professions. On the basis of their inputs, we framed the youth policy," Sarang said.

Responding to a question about him getting elected from a Muslim majority constituency, Sarang said, "I believe beyond politicians and politics, there is no major difference between Hindus and Muslims. In 1857, pundits and maulvis fought together. In the first election, I did not get much support from the Muslim voters. But after I won, I went back and worked for both communities. I brought Narmada for both."

Responding to a question if being the son of Digvijay Singh is an advantage or disadvantage, Jaivardhan Singh said, "if you have a big leader in the family, you have its advantages and disadvantages. The advantage is that you get opportunities early. I became the youngest MLA in MP. But, now, it is upto my hardwork."

"People also think that the new generation leader would be like his father. But, everyone is different from. I am the third generation politician from my family. My grandfather was an MLA in the first MP Assembly in 1952. I should not be measured on the scale used for them," Jaivardhan said.

Jaivardhan praised the Madhya Pradesh government saying that it did not discriminate in the work of development. "There is a process for everything. For construction of a road in any locality of Madhya Pradesh, it has to follow a certain process. It is followed everywhere. There is no discrimination in the work of development here. No one tries to delay it, neither the officers nor the ministers do that here. Yes, at times, files go missing."

Bhakti Sharma, who left a promising career in the US to become a panchayat level politician, said, "I come from family of agricultural landlords. Money can't always give you satisfaction. When I see politicians saying that we need to bring villagers in the mainstream, I wonder who is in the mainstream as about 65 per cent people are still dependent on agriculture and in rural areas. So, I came back to village and got into social service."

"After seeing me work honestly among the people. The village elders thought that I could be the sarpanch. They suggested my name and I got into electoral politics," Bhakti said. Bhakti is the sarpanch of Barkhedi panchayat, which was recently reserved for general category women.

On the question whether women need reservation in politics, Bhakti Sharma said, "We live in a democratic country. The question here is, are women weak? If they are not..had they been weak, could Indira Gandhi have challenged the US in 1970s. One of the finest politicians in the country right now is Sushma Swaraj. But there is a mentality (which works against women), to change which we need reservation for four terms. May be after that may be men would be demanding reservation."