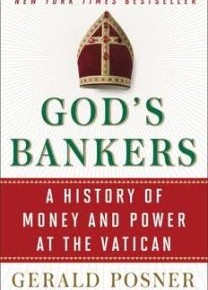 Story By: Rita Joseph (Matters India). Former pope Saint John Paul II had used the Vatican Bank to “fund” the Solidarity movement in his native Poland. The Bank, which was a “haven for mobsters, mafia men and money launderers, helped Nazis and Fascists rob and murder Jews and other non-Catholics in the mid 20th century.”

These are some of the daring revelations made by lawyer-turned-investigative writer Gerald Posner in his latest book “God’s Bankers: A History of Money and Power at the Vatican.”

The result of a nine-year research, the book traces the political intrigue and inner workings of the Catholic Church and the scandal-ridden history of the Institute for the Works of Religion, or IOR, its Italian acronym, commonly known as the Vatican Bank.

What led Posner to pen the compilation was the repeated evidence he unearthed on the Church’s involvement with Nazis while working on the autobiography of notorious Nazi doctor Josef Mengele. He had co-authored the book ‘Mengle: The Complete Story’ along with John Ware in 1986.

God’s Bankers provides a rare exposé and an astounding saga marked by mysterious deaths, questionable suicides; a carnival of characters from popes and cardinals, financiers and mobsters, kings and prime ministers; and a set of moral and political circumstances that clarify not only the Church’s aims and ambitions, but reflect the larger dilemmas of the world’s more recent history.

That history includes sordid stories of financial alliances with Germany during World War II, and Italian mobsters in the 1980s. All told through 200 years of bishops, cardinals, and the Popes in the 752-page tome.

Delving deep into the little- known history of the Vatican Bank, Posner found it “acted like an offshore bank inside Rome”. Thanks to its independent status, suspicious characters with well-lined pockets turned the IOR into “one of the largest banks for money launderers and mobsters.”

However, not only those living miles away from the marble colonnades of Rome but also the top of the church hierarchy and the head of the IOR were ignorant of the goings on, writes Posner in the book on The New York Times’ best seller list.

The Vatican was not always awash in cash and donations. Until the 19th century, it had 15,000 square miles of what was central Italy. But the 1870 Italian revolution reduced it from being an empire to a little postage-stamp size of property called Vatican City.

The Holy See struggled to finance its operations. Money came largely through donations and indulgences — free passes for sins in exchange for money. The popes in the 19th century, in keeping with the precepts of the Bible, were averse to taking usury or interest.

During World War II, when “the Americans and British were trying to stop money going to Nazi Germany,” a financial wizard and Nazi spy Bernardino Nogara, who was the financial advisor at the Vatican, mooted the idea of setting up a bank.

Posner claims, the Vatican Bank was established in 1942 to avoid having financial transactions tracked through Western Banks. Due to its location in Vatican City, the IOR was exempt from all wartime restrictions and became “the world’s best offshore bank.”

The bank, he asserts, also held investments in businesses, including life insurance companies, with operations in Nazi-controlled countries.

“The Vatican Bank orchestrated complex schemes involving dozens of offshore shell companies as well as businessmen who often ended up in jail or dead.”

Posner, whose 11 books include the best-seller, “Why America Slept,” based on the 9/11 terror attack, provides mountains of evidence to buttress his claims. Nearly 200 pages are devoted to endnotes.

The book opens with a young postal clerk discovering a body hanging from the Blackfriars Bridge. The dead person was Roberto Calvi, the head of Milan’s Banco Ambrosiano. It was believed to be a murder made to look like a suicide. But to date, the mystery is yet to be solved.

In 1982, Calvi bankrupted Ambrosiano and was on the run. Scandal-ridden American Archbishop Paul Marcinkus, who ran the Vatican Bank from 1971 to 1989, had associated with Calvi and another financial fraudster Michele Sindona. The latter was convicted for murder in 1986 and he committed suicide in prison.

The Pulitzer-winning author says, Archbishop Marcinkus served as “a spy for the State Department.” The prelate maintained that the Bank had to adapt to new and more sophisticated times. “You can’t run the church on Hail Marys,” he said.

Posner says that in the late 20th century there was a “real alliance” between American intelligence, the right wingers and the Vatican on the “meeting of minds against communism.”

He claims that the Polish pope, John Paul II, funded millions of dollars through the Vatican Bank for the Solidarity movement in his native Poland in the eighties.

Archbishop Marcinkus had an Italian intelligence agent convert US$3.5 million in cash into pure gold ingots, then smuggle them into Poland hidden in an SUV.

While God’s Bankers traces the history of the Vatican’s efforts to fund itself and its network to Pope Francis’ reforms, what is more gripping are the chapters devoted to the Church’s actions during and immediately after World War II.

It is widely believed that the Vatican maintained a “policy of silence” against Nazi crimes during the war.

“That many individual nuns and priests exhibited great bravery during the war to save many victims does not diminish the silence or acts of the church’s hierarchy,” says Posner, a master chronicler of legal and financial misconduct.

Pope Pius XII, who reigned from 1939 to 1958, was criticized for not taking a stronger stand against Nazi atrocities and in fact colluding with them for financial considerations.

Many countries, including the US and UK, had appealed to the Church to shed its neutrality but in vain.

According to Posner, the Reichskonkordat, a series of pacts signed by Hitler, extracted taxes from Catholic churches and guaranteed the Vatican’s silence regarding the Holocaust.

“His (Pius XII) silence helped protect a complex web of interlocking business interests with the Third Reich that yielded significant profits for the Vatican.”

The pope refused to publicly denounce anything the Third Reich was doing, even though the Vatican was one of the most informed institutions on the mass killings, long before the Allies discovered anything.

However, “The Pope averred he had spoken out enough about the ‘aggressions of war’ and the ‘sufferings of civilians’, but complained that his ‘appeal was little heeded.”

The author claims the Church was just frozen by indecision and fear. They were afraid that if they spoke out, the Nazis might in fact move against Catholics in Germany.

Posner builds up his case upon already published books, U.S. State Department memos, business archives, interviews with still-living key players and other evidence from different countries. The Vatican did not allow him access to its secret archives.

The damning revelations notwithstanding, God’s Bankers ends on a positive note that the Vatican’s finances and image are set to improve under reigning Pope Francis.

The pontiff has set several course corrections in motion, including reforming and revising the scope of the Vatican Bank. The changed structure will ensure it won’t have the ability to be at the centre of those scandals, concludes Posner.

The restructuring of the bank, closure of more than 4,000 ‘dodgy’ accounts, including that of seven-time Italian prime minister Giulio Andreotti, a spate of high profile arrests and VatiLeaks indicate that Posner’s compilation is by no means a piece of fiction.

The book makes for an interesting read though a tad too lengthy.