God to Cain, Pope to educators: ‘Where is your brother?’ 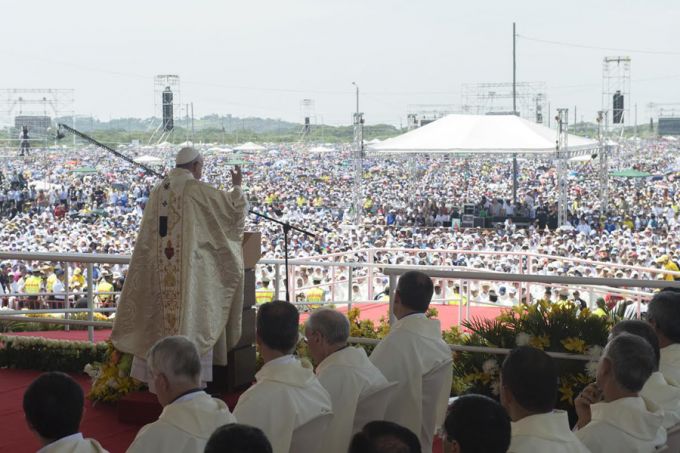 Quito, Ecuador, Jul 7, 2015 / 04:18 pm (CNA/EWTN News).- Pope Francis on Tuesday challenged Ecuador’s educators to form their students to engage in modern-day issues with innovation and in solidarity with the poor.
“As a university, as educational institutions, as teachers and students, life itself challenges us to answer this question: What does this world need us for? Where is your brother?” Pope Francis said, in reference to the Genesis account of God asking Cain about his brother Abel.
“Again and again we sense the urgency of the question which God put to Cain, “Where is your brother?” But I wonder if our answer continues to be: “Am I my brother’s keeper?””
Pope Francis met on Tuesday with representatives of schools and universities at the Pontifical Catholic University of Ecuador.
He strayed briefly from the text a few times, at one point lamenting that when a bridge collapses, it is a global scandal, but when an elderly person dies from the cold, it does not make it into the newspapers. He challenged his audience: “Are you your brothers’ keepers?”
In his address, the Pope described academia as a fertile soil that, if cultivated and protected, can enrich civic and cultural life.
He also said education shapes the future of a society and lays the groundwork for generations to come.
“We need to ask ourselves about the kind of culture we want not only for ourselves, but for our children and our grandchildren,” Pope Francis said, before citing his recent encyclical on the environment. “We would do well to ask ourselves: “What kind of world do we want to leave behind? What meaning or direction to we want to give our lives? Why have we been put here? What is the purpose of our work and all our efforts?”
With these questions, Pope Francis challenged educators to fully engage students in the realities of the world. He said this honest engagement with the world will help students develop critical thinking skills that can lead to humane, alternative solutions to modern-day crises.
The Pope mentioned one modern-day crisis that educators and students must address: the globalization of a technocratic paradigm.
He said this paradigm “tends to believe “that every increase in power means an increase of progress itself, an advance in security, usefulness, welfare and vigor: … and assimilation of new values into the stream of culture, as if reality, goodness and true automatically flow from technological and economic power as such”.”
Pope Francis also addressed the environment. He told educators that care for the environment is no longer a recommendation, but a requirement – and care for the environment is fundamentally linked to care for the human person.
“There is a relationship between our life and that of mother earth, between the way we live and the gift we have received from God,” he said. “Just as both can “deteriorate”, we can also say that they can “support one another and can be changed for the better”.”
“This reciprocal relationship (between the environment and the human person) can lead to openness, transformation and life, or to destruction and death,” he continued.
The Pope turned his attention to students, whom he described as Ecuador’s present and future. He asserted that education is a privilege and challenged students to grow in solidarity with the uneducated. He told the students their education gives them more responsibility to the poor in their community and to care for the environment.
“Personal initiatives are always necessary and good,” Pope Francis said. “But we are asked to go one step further: to start viewing reality in an organic and not fragmented way, to ask about where we stand in relation to others, inasmuch as 'everything is interconnected.'”